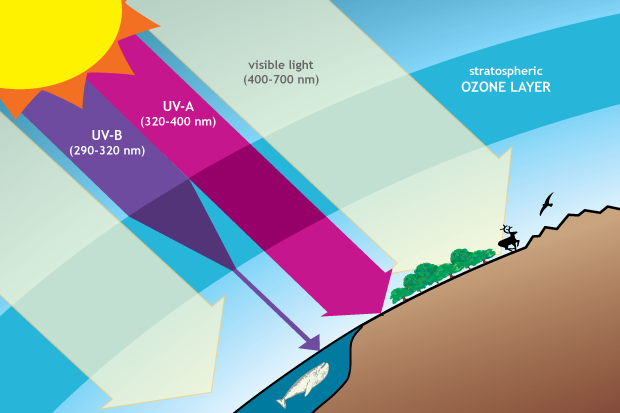 Every August, the ozone hole begins to grow over Antarctica, reaching its maximum size by late September. But by the New Year, it’s gone again. Russell Schnell, of NOAA’s Earth System Research Laboratory, explains the weird forces behind the ozone hole’s formation—and why, in recent years, an ozone hole has capped the Arctic too.

This is SCIENCE FRIDAY. I’m Ira Flatow. 21 years ago this week, way back in October of 1991 on the first-ever episode of SCIENCE FRIDAY, one of our show topics was the ozone hole, that bite out of the Earth’s ozone layer caused by chemicals in our refrigerators, air conditioners, cans of hairspray. Our guest that day was the late Sherwood Rowland, who would go on to win the Nobel Prize for his work on the ozone hole.

Two decades later, the ozone hole is still there, hovering over Antarctica. In fact, at this time of the year, the hole is at its largest. It’s not getting any worse today, but it’s hard to say where – that we’re in full recovery yet, according to my next guest. And now that ozone-eating chemicals have been outlawed, is there anything else we can do to protect it or are we just watching and waiting? And what about the hole over the Arctic, the North Pole, that’s been forming in recent years? Is that something to be concerned about? 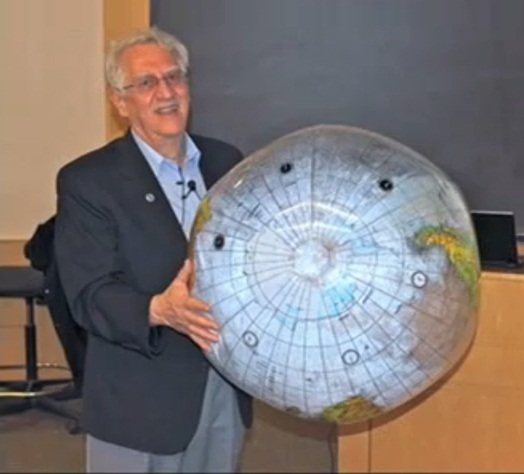 Dr. Russell Schnell (above) is deputy director of the Global Monitoring Division of the Earth Systems Research Lab at the National Oceanic and Atmospheric Administration in Boulder, Colorado. He joins us from KGNU today. Welcome to Science Friday.

FLATOW: Thank you. When you see pictures of the ozone hole, is it actually shaped just like Antarctica?

SCHNELL: Yes. It actually follows the outline of the ice sheet and the continent. Antarctica is the largest, biggest mountain in the world. It’s two miles of ice thick, and it’s larger than the U.S. Sometimes it’s as big as North America.

FLATOW: Wow. And the hole gets bigger and smaller, right? It shrinks, it expands?

SCHNELL: Yeah. The hole is an annual phenomenon. It only lasts about 60 days or so. It starts the first of September, reaches its maximum by the end of the month. And then it’s pretty well recovered by – half-recovered by middle of October, and it’s over by December.

FLATOW: Mm-hmm. And so it follows the seasons then.

SCHNELL: Yes. It follows springtime in Antarctica. The chemical reactions that destroy the ozone are driven by sunlight.

SCHNELL: Very simple. You have ozone, which is a molecule of three oxygen, and then you have fluorocarbons, HFCs, other chemicals that release chlorine, so you get sunlight plus chlorine. And you need a third ingredient. You need ice crystals or polar stratospheric clouds that form only at temperatures around minus 80C and colder. You get these all together, the sunlight comes up. The chlorine molecules are sitting on the snowflakes and the reaction is ignited. It’s something like – if you can envision a lake of gasoline, thousands of square miles, and you’re standing there with a match and it’s a hot day and you throw the match in. Whoo. Just like that, it goes across the continent.

SCHNELL: Well, not quite.

FLATOW: Does it make a noise like that when it happens?

SCHNELL: I don’t know. Nobody’s ever been up there to listen. But if you can envision it, probably like a hundred freight trains within a mile of you.

FLATOW: Wow. If the chlorofluorocarbons are hanging around and acting so quickly like you just showed us, why don’t they eat up all the ozone? Why does the hole break up and re-form every year?

SCHNELL: The hole forms because in the winter in Antarctica, without the sunlight, the air gets very cold and the winds go running around this two-mile high mountain of Antarctica, around and around, and they form, if you can envision it, a huge cooking pot where all the chlorine molecules and HFCs, other things collect in the center. And it’s totally dark. And then it gets coldest just at the end of August and the ice crystals form and the chlorine sits on there. And then when the sunlight comes, the reaction goes. And the reaction will go for about only 30 days, and then it’ll completely remove, at present, almost all of the ozone in the 10- to 15-mile layer, which is the ozone layer above Antarctica. 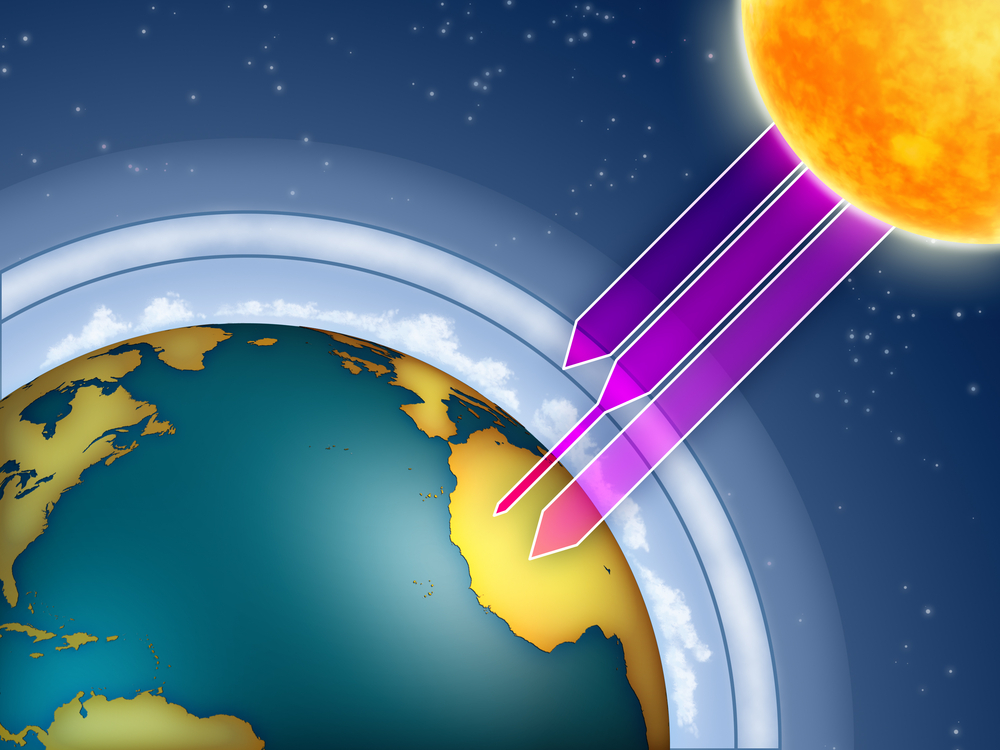 And then as the atmosphere warms up, this – the edge of the cooking bowl gets a little bit wavy and soft. And then all of a sudden, you get this big waterfall of ozone rushing into this open area, the ozone hole, and fills it right up. And it’s just – within – by the end of November, it’s actually full and might even be overfull, higher than it was at the start.

FLATOW: Didn’t the ozone hole form over the North Pole a couple of years ago?

SCHNELL: Yes. It wasn’t really centered on the pole, but in the northern areas. Yes, it did. And the same occurrence – and the same principles happened there. You have ozone at a high layer. It gets cold. And sometimes, it gets a little extra cold. You get these snow crystals forming, PFCs, and then you get exactly the same reaction.

But in the Arctic, the vortex is not quite as strong or not even nearly as strong as in Antarctica. And because there’s no continent, the Arctic is a floating ice mass. It’s an ocean with an ice mass on it. Antarctica is a huge ice island two miles thick with an ocean around it. So they’re completely opposites. So the vortex breaks down in the Arctic much easier, and the temperatures are much warmer. The Arctic is much warmer both on the ground and in the stratosphere than Antarctic.

So you do get this – ozone donuts, people like to call it, to distinguish it from an actual hole – occurring in the Arctic. But all of the ingredients are there. So if we get more climate change in the Arctic, the heating at – lower, the surface – the stratosphere will get a little cooler. And if you start depleting ozone, the stratosphere doesn’t warm up as much, so it’s kind of a self-feeding process. And you start getting more of these polar stratospheric clouds. You’re going to have more potential destruction of ozone in the Arctic.

FLATOW: 1-800-989-8255 is our number. Has the ban of the spray can ingredients and things and the air conditioners – has chlorofluorocarbons, has that shown an effect on the…

SCHNELL: Amazing, amazing effect. The – some of the concentrations – there’s actually four chemicals that are driving – that have been banned, and their concentrations have gone down to, in some cases, one-tenth of what they were. It’s an amazing story that the governments of the world listened to the scientists, put together an agreement called the Montreal Protocol, stabilized the production of these chemicals and then reduced them, and the atmosphere started to respond. Actually, you could see it within a year.

ADELE: Hi there. Love your show.

ADELE: So along the same lines of what you just asked, what is the effect of chlorine, you know, that many of us use for our pools, have on the ozone? And is there an alternative?

SCHNELL: …and releases it up there.

FLATOW: Have a good weekend. Is – are there other ways an ozone hole can form totally unrelated to human activity?

SCHNELL: Not totally unrelated because the chlorine that is up there is manmade. But there are other forms of catalysts that can cause the problem, and those are volcanic explosions that put particles up into the stratosphere. So there’s enough excess chlorine in the atmosphere now that, say, for the next 20 to 30 years, if we have a huge volcanic explosion that puts particles into the stratosphere, we could have very large ozone depletions at mid-latitudes and latitudes where people are living.

As you know, in the Antarctic, the ozone hole occurs essentially over this huge ice island or ice mountain, and there’s not people and stuff but, yes. So for the next 20 years, we are very vulnerable. The volcano that occurred in Iceland a couple of years ago was very, very small and all in the lower atmosphere. You need something that shoots it up into the edge of space. So there are people monitoring this all around the world on a daily basis just to be ready in case this happens.

ANDREW: Hi. Thank you for taking my call. First time calling in, but wanted to say – ask a general question. As the ozone gets depleted over the Antarctic and the season changes, everything flows back in, are you depleting the global supply of ozone in this process?

SCHNELL: No, because ozone is made and destroyed on a constant basis. And there’s always ozone being produced by sunlight hitting oxygen. So the total amount, for the most part, is not depleted. But since the destruction around the world is a little bit higher than the production, there is a slight lessening of ozone, but it’s not a huge amount at this point.

FLATOW: Well, I want to thank you very much for taking time to be with us today. Very interesting, and it’s actually our anniversary of 22nd – entering our 22nd year, talking about ozone again and ozone depletion. Thank you very much, Doctor Schnell.

FLATOW: Russell Schnell, the deputy director of the global monitoring division of the Earth System Research Lab at the National Oceanic and Atmospheric Administration in Boulder, Colorado.

Copyright © 2012 NPR. All rights reserved. No quotes from the materials contained herein may be used in any media without attribution to NPR. This transcript is provided for personal, noncommercial use only, pursuant to our Terms of Use. Any other use requires NPR’s prior permission. Visit our permissions page for further information.