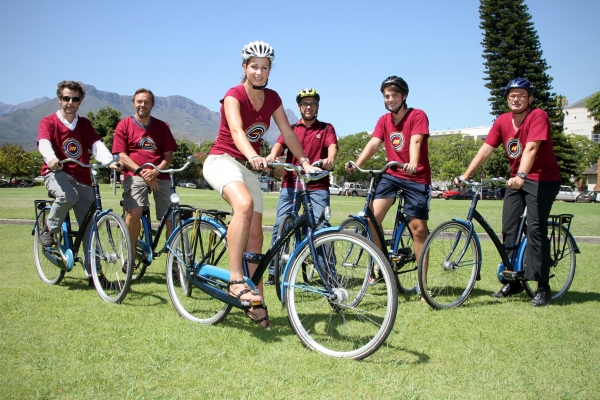 As a child growing up in Stellenbosch we had complete freedom of movement. How independent we were, as we cycled ourselves to all activities by means of our own legs – on bicycles. Student numbers were probably less than half of what they are now and only senior students were allowed cars.

Even as a student I of course cycled until my final year. Later I was involved in plotting cycling paths so that my children could safely negotiate the narrow roads by cycling on the one pavement – the other left for pedestrians.

I eventually left the town due to its hectic traffic, which I feel is defacing the beautiful valley. What once was a village had exploded into a city in terms of cars.

Hence I am chuffed to announce that the Stellenbosch University (SU) will be launching a major cycling project to coincide with the institution’s Sustainability Day celebrations on 15 March.

A total of 400 commuter bikes have been imported from the Netherlands for this purpose. Staff and students can rent a bicycle for R1 000 a year, R600 of which will be refunded if the bike is returned in a good working condition.

The overarching aim is to reduce motor vehicle traffic on campus and in the rest of Stellenbosch, and to contribute to sustainability in this way.

Prof Russel Botman, SU Rector and Vice-Chancellor, announced the cycling project at briefings to staff and students this week. The topic was SU’s Mobility Plan.

“Worldwide, a mind shift has occurred. Humankind has realised that our natural resources are limited and that we cannot continue polluting our planet like we have been doing. The MATIE BIKE is part of SU’s contribution towards the green concern,” Prof Botman said.

He pointed out that SU had committed itself to promoting a sustainable environment by means of the HOPE Project, a University-wide initiative for addressing societal challenges.

“By discouraging the use of motor vehicles on campus, we can reduce our carbon footprint. This will also relieve the pressure on our limited parking spaces. I believe that SU is a pioneer in South Africa with these bikes.”

SU is planning safe cycling routes on campus, with Victoria Street first in line. The campus routes will link up with similar routes that the municipality is planning for the rest of the town.

Staff and students can register their bikes with the SU Risk and Protection Services (USBD), and also use the dedicated bicycle shed. This applies not only to the MATIE BIKES, but to all bicycles.

A shed is already available next to the Neelsie, and more sheds are being planned. Users can lock the bicycles that they leave inside the sheds.
“The sheds will be well-lit and monitored by camera,” said Mr Chris Munnik, Chief Director: Facilities Management.

As part of Sustainability Day at SU – and to launch the cycling project officially – a cycling relay will be held on 15 March. Teams of four may enter, and one cyclist per team needs to take part on a MATIE BIKE.

The race will follow a route across campus, and prizes will be awarded for the overall winner as well as for a residence winner and a staff winner. Lucky draws, for which all participants will be in line, will also be held.