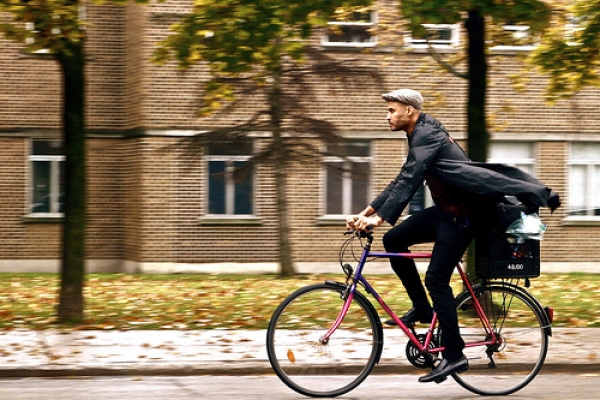 Rapid transit and safe cycling/walking networks are good for both health and climate – and climate experts should consider more systematically how these strategies can reduce CO2 emissions in the transport sector, one of the world’s major contributors to climate change, says a new WHO report.

The new report, Health co-benefits of climate change mitigation – Transport sector was released during the United Nations Framework on Climate Change Conference of the Parties (COP-17).

The report reviewed over 300 studies on health outcomes from different types of land transport systems to identify those mitigation measures most closely associated with specific health co-benefits or risks.

Health in the Green Economy

The review is the latest product of WHO’s Health in the Green Economy initiative, which is considering available evidence on health impacts from climate mitigation strategies for key economic sectors, as reviewed by the UN’s Intergovernmental Panel on Climate Change (Climate Change, 2007).

The new WHO report was launched at an official COP-17 Side Event on “Health and Development in Climate Change Mitigation and Adaptation,” convened by the Government of South Africa, the United Kingdom of Great Britain and Northern Ireland, and WHO. The report was also the focus of a press briefing, involving high-level officials from South Africa’s Department of Health and Department of Transport, as well as WHO.

The IPCC’s global assessment of mitigation options for the transport sector places the greatest emphasis on the mitigation potential of improving carbon efficiencies for private vehicles and fuels.

Good for humans = Good for climate

In contrast, the WHO review found a stronger, and more positive, association with health benefits from rapid transit and dedicated walking/cycling systems – measures which are given less emphasis by the IPCC, which did not consider health issues.

“We have looked at the IPCC assessment through the lens of public health and come up with quite a different reading,” said Dr Carlos Dora of WHO’s Department of Public Health and Environment, in the briefing to journalists.

“Public/rapid transport and safe cycling and walking are the prototype of a transport system that is good for health; it so happens that these are good for climate too.”

A large and growing body of literature finds such systems are strongly associated with more healthy physical activity, lower urban air pollution risks, and lower rates of traffic injury among transit users and pedestrians and cyclists on dedicated networks, said Dora, citing findings in the report.

Land use systems that emphasize more compact cities, and mixed use development of commercial and residential areas, along with amenities for walking and cycling, also are strongly associated with better health as well as greater health equity because they allow groups such as children, women, older people, disabled, and those without cars to move around more safely and easily.

Senior officials from South Africa’s Department of Transport and Department of Health, said that the report places pressing health, development and climate issues in a fresh, intersectoral perspective.

“I am really pleased that we are making the triangular connection between health, equity and climate justice,” said MP Jeremy Cronin,South Africa’s Deputy Minister of Transport.

“In South Africa more than 15 000 people are killed on our roads every year, 40% of those are pedestrians, and significant numbers are children of the poor working classes,” Cronin observed.

“The numbers of road traffic fatalities are greater than that of malaria, and steadily approaching that of HIV. This tragedy is increasing, partially due to …investments in freeways and roads rather than public transport.

We need investments in public transport rather than freeways

“But it is preventable, given major interventions. So we really welcome the publication, as it gives us a better understanding of what we are facing in South Africa on the transport and health front.”

MP Cronin observes that transport systems in this fast-growing African economy represent a mix of challenges and dilemmas for health, environment and transport.

“We have many of the same features you see in the developing world, but compounded by South Africa’s apartheid past. We have extraordinarily sprawling cities, where people were displaced into distant dormitory townships, where people were expected to sleep and then come back into the centre to work.

Average bus trip is 20-25 km due to sprawling cities

“So in South Africa the average bus trip is about 20-25 kilometres, as compared to London where’s its about 8 kilometres. And that kicks into all of the challenges you are raising, as there is congestion, long travel distances, and huge pressures on people.

“As government we are trying to reverse this spatial divide, building mixed-use developments, where people can access resources, live and work. And with this report we are better equipped to make the argument more strongly.

Still, he added, the solutions are not simple ones, and require cooperation among mitigation, transport and health sectors rather than laying blame.

“IPCC is not alone in this,” he notes. “Too often in the transport sector, the interventions are very technical. We fail to look at the local and the social dimension. It is essential that we look at building resilient communities, not becoming overly technical in our solutions.

“In South Africa right now, we can’t push people out of their cars yet, as else they can’t get anywhere until we have provided viable alternatives. … So we really welcome this publication as it gives us a better understanding of what we are facing in South Africa on the transport and the health front.”

Dr Ramphelane Morewane, Chief Director of Regional Services in South Africa’s Department of Health, told reporters that the report created opportunities for health and transport sectors to work together.

“Transport is not only an enabler in terms of access to health care, but we now recognize that there are other modes of transport that have greater health benefits, such as walking and cycling,” said Morewane.

The case studies of transport and health issues at country level, including a review of South Africa’s own challenges and recent progress in promoting rail, bus rapid transit and non-motorized transport systems, is another positive feature of the WHO report, Morewane noted.

“We welcome that there is a case study that comes from South Africa, so it is not something that has been ‘sucked out of a thumb’,” Morewane observed.

The WHO report looked globally at studies of health outcomes in association with different types of transport investments; transport system use; and land use patterns, and identifying some of the following health-transport linkages:

Most of the population benefits

Strong rapid transit, cycling and walking networks also were found to yield added health benefits for groups that typically have less access to private vehicles, including: children/teens, the elderly, women, people with disabilities, and lower wage-earners.

“Taken together, these groups comprise most of the world’s population,” notes Dora.

“So, in fact, low-carbon transport can provide many benefits to most people, in countries at different development stages”.

Diesel vehicles not good for health

“Many kinds of climate and transport measures can yield large, immediate, benefits for health, but some climate measures may be bad for health.  For example ,at the local level, more reliance on diesel can increase relative risks of respiratory and heart disease. Also, better fuels don’t do anything to improve noise, nor to encourage physical activity and they do not improve safety risks either. Public transport and safe cycling and walking on the other hand, substantially reduce these risks to health.”

Biofuels can also have health implications

Greater use of biofuels in transport is another climate mitigation measure that could have health implications, the WHO report notes. The report cites studies noting that in cases where biofuel production replaces food crop production, increased biofuels reliance could also pose risks to nutrition and food security, particularly among the world’s poor.

On the other hand, the report suggests that there should be more systematic study of both the climate and health benefits of shifting to compressed natural gas (CNG), particularly for certain types of buses and trucks. While the review did not undertake a systematic review of CNG fuels or CNG vehicles, it does note evidence that CNG engines tend to emit significantly lower concentrations of small particulates than comparable diesel vehicles.

Transport represent ¼ of all direct emissions

In terms of climate, transport’s carbon footprint represents nearly one-quarter of all direct CO2 emissions, the majority from land transport sources, according to the International Energy Agency (IEA, 2010). This estimate does not consider, however, carbon emissions associated with vehicle manufacture or transport infrastructure. The carbon footprint of vehicle manufacture and road infrastructure, as compared to BRT/Rail and NMT modes, are not addressed in detail, either, by the IPCC report.

Transport is also a major economic sector, and it has huge impacts on how cities develop, as well as on equity and urban quality of life, the report notes. These include features such as urban sprawl and urban traffic congestion along with pollution. But weak public transport systems also can be a factor in critical socio-economic factors that also influence health, such as long journeys among poorer population groups travelling on foot, bicycle or bus networks.

Yet while there are large differences in the transport systems of rich and poor nations which need to be recognized, with affluent countries, as well as many emerging economies increasingly dependent on the automobile, while people in very low income countries have trouble getting access to any motorized transport at all, the report identifies what could be some fundamental “win-win” principles for health, transport and climate, Dora said.

That’s because high-quality transit, walking and cycling networks can facilitate better access to motorized transport among poorer groups, as well as physical activity in more sedentary, urban populations. When combined with more compact land use, these may also wind up being very cost-effective climate mitigation measures in the longer term.

“So if you want to reduce climate change and do something for health, employ locally and produce results you can measure, then you can go into good quality cycling, walking and public transport/rapidtransit,” Dora said.