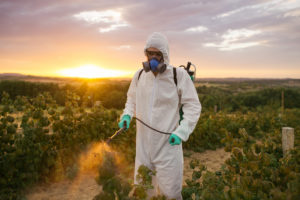 The study compared metabolite concentrations of organophosphorus (OP) pesticides (a class of insecticides that disrupt the nervous system) in the urine of 39 urban and suburban children aged 2 to 4 years. The researchers’ findings point to a relatively simple way for parents to reduce their children’s chemical loads – serve organic produce.

The authors focused on children’s dietary pesticide exposure because children are at greater risk for two reasons: they eat more food relative to body mass, and they eat foods higher in pesticide residues – such as juices, fresh fruits and vegetables. An earlier study cited by the authors looked at pesticide metabolites in the urine of 96 urban and suburban children and found OP pesticides in the urine of all children but one. The parents of the child with no pesticide metabolites reported buying exclusively organic produce.

Researchers recruited children for the study outside of conventional and organic grocery stores in the Seattle metropolitan region and asked parents to record all food consumed in a three-day period prior to collecting their child’s urine over the next 24 hours. Based on the food diaries, the study assigned the children into groups consuming at least 75% organic or at least 75% conventional fruits and vegetables. Parents were also asked about household pesticide use in their homes and on gardens, lawns and pets. Although the authors found that parents of children eating conventional diets were more likely to report some home pesticide use, they did not find significant differences in concentrations of pesticide metabolites based on this use.

The children`s urine was tested for five metabolites of OP pesticides which are registered in the U.S. and frequently applied to food crops. The study focused on these pesticides because they are metabolized into several easily recognizable compounds. Breakdown products of pesticides such as malathion, azinphos-methyl, parathion, oxydemeton-methyl, phosmet, methyl parathion, methidatihon and dimethoate were found at the highest concentrations. Of these pesticides, azinphos-methyl and phosmet are the two primarily used on fresh produce within the U.S. Lower concentrations were found of breakdown products from diazinon and chlorpyrifos.

Average concentrations for the organic group were nine times lowers, suggesting that some children eating conventional produce had much higher concentrations of OP metabolites in their systems. These findings confirm what is already known about pesticide residues on conventional produce. Consumers Union analyzed U.S. Department of Agriculture residue data for all pesticides for 1999 and 2000 and warned parents of small children to limit or avoid conventionally grown foods known to have high residues such as cantaloupes, green beans (canned or frozen), pears, strawberries, tomatoes (Mexican grown) and winter squash. The Seattle study, which reflects children`s food diaries, adds apples to that list.

Susan Kegley, staff scientist at Pesticide Action Network states, ‘We have been concerned for a long time about continuous exposure to organochlorine pesticides because they persist in our bodies for years. This study reveals that we are continuously exposed to OP pesticides, not because they linger in our bodies, but because we are persistently being exposed through the food we eat every day.` The study’s main conclusion – eating organic fruits and vegetables can significantly reduce children’s pesticide loads – is information that parents can act on to reduce their children`s risk. A secondary conclusion – that small children may be exceeding ‘safe’ levels of pesticide exposure – is information that regulators should act on and, at the very least, reduce uses of these pesticides on food crops.

This article was sourced from PANUPS – a weekly email news service providing resource guides and reporting on pesticide issues that don`t always get coverage by the mainstream media. It’s produced by Pesticide Action Network North America, a non-profit and non-governmental organization working to advance sustainable alternatives to pesticides worldwide.