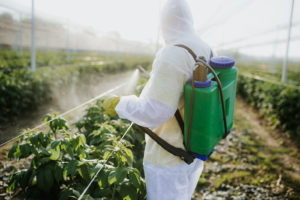 The widespread use of pesticides in agriculture is a serious source of pollution in our country. Not only are farm workers and nearby rural communities suffering severe health issues, due to direct exposure through spray drift, but these agrochemicals contaminate our soil, waterways and underground water.

While the Pest Management Act has provisions relating to the impact of agrichemicals on human health and the environment, this has not led to the implementation of monitoring and regulation systems. In fact, the issue is barely even documented.

To address this urgent need, the South African Organic Sector Organisation (SAOSO) and GMO-Poison Free Zones South Africa have produced a briefing, Pesticide spray drift in South Africa, which calls for legislation on buffer zones and other measures to protect our people and environment.

Abroad, the scientific literature draws a clear line between chronic exposure to pesticides and illness, but in South Africa this vital research is very limited and such findings remain blatantly ignored by our policy makers. In addition to not being enforced, the regulating framework is confined “to spraying protocols and product specification, without sufficient consideration given to occupational health, the health of adjacent rural communities, long-term environmental impacts and the need to sanction abuses and compensate victims,” write Sasha Mentz-Lagrange and James Dabrowski.

These researchers hone in on three cases of pesticide drift contamination, linked to the cultivation of table grapes, strawberries and blueberries in the Western Cape. The first-hand accounts of communities devastated by the spraying practices of neighbours are chilling, and this issue is rife in other parts of the country where large scale chemical intensive farming takes place. Not surprisingly, agroecological organic farms in the vicinity are also being contaminated, which undermines their attempts to grow clean, healthy food.

With no recourse to protect themselves, these communities feel powerless to the point of despair. Meanwhile, farmers continue to use agrochemicals with impunity, with no thought to the impact of their spray drift, “an externality associated with chemical farming for which no one is being held accountable.” This status quo is held in place by the powerful influence the pesticide lobby wields over our regulatory bodies.The situation will only worsen as pesticide use continues to increase.

The current institutional regime regulating agro-chemicals in the country is a state of disarray and needs to be completely overhauled.

The key recommendations this report comes to in the context of spray drift as a component of the systemic agro-chemical reform needed are:

In terms of buffer zone distances, the report refers to recent discussions and legislation adopted in some European countries and points to potential calculation tools.

The legislation should be revised to set South Africa firmly on the path of pesticide reduction, starting by giving serious priority to non-chemical alternatives.