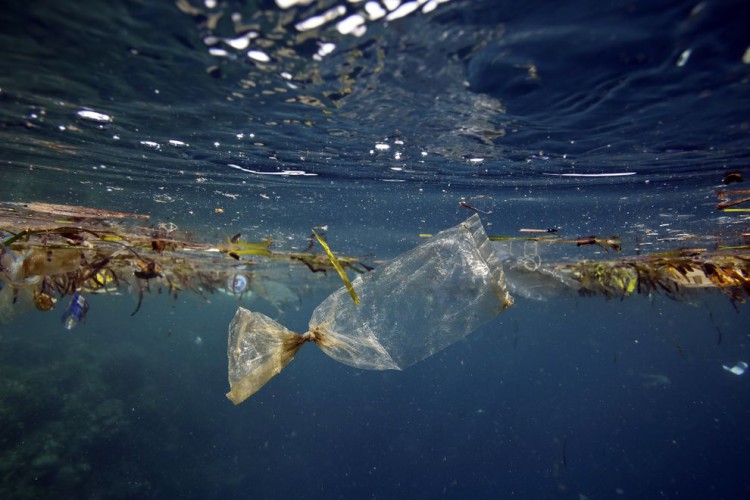 Before  Malaysia Airlines Flight 370 went missing, sea trash was not a global headliner.

But as hundreds of objects sighted off the Australian coast as possible aircraft debris turn out to be discarded fishing equipment, cargo container parts, or plastic shopping bags, a new narrative is emerging in the hunt for the missing plane: There’s more garbage out there than you think. Most of it is plastic. And marine life ingests it, with catastrophic consequences.

“This is the first time the whole world is watching, and so it’s a good time for people to understand that our oceans are garbage dumps,” says Kathleen Dohan, a scientist at Earth and Space Research in Seattle, Washington, who maps ocean surface currents. “This is a problem in every ocean basin.”

Dohan plotted the movement of debris in a time-lapse video that shows where objects dropped into the ocean will end up in ten years. The objects migrate to regions known as garbage patches. The Pacific and Atlantic Oceans have two patches each, north and south. The Indian Ocean’s garbage patch is centered roughly halfway between Africa and Australia.

The term “patch” suggests this floating detritus is packed together in an oceanic version of a landfill. Instead, these “patches” are actually huge zones where debris accumulates but floats free, circulating continuously. So it’s possible for sailing ships and other small boats to inadvertently sail into a garbage patch region and encounter rubbish.

That was the case in last summer’s Transpacific Yacht Race from Los Angeles, California, to Honolulu, Hawaii, when logs, telephone poles, and other wood debris from the 2011 Japanese earthquake and tsunami drifted into the Texas-size Great Pacific Garbage Patch halfway between Hawaii and California.

“There were a dozen or more reports about collisions, and some of the boats were damaged by this floating wood,” says Nikolai Maximenko, an oceanographer at the International Pacific Research Center at the University of Hawaii in Honolulu, who has been studying the earthquake debris’ drift across the Pacific.

Maximenko estimates that 100,000 to one million large wood objects, including timber and beams from houses, are still floating in the area.

“There is an analogy between that and the Malaysian plane,” he says. “In both cases, we were not able to find anything identifiable on satellite images. We do not have an observation system to track individual objects. This system needs to be built.”

Although the formation of the Great Pacific Garbage Patch was predicted in the 1970s by scientists from the Woods Hole Oceanographic Institution in Woods Hole, Massachusetts, it wasn’t documented until 1999 by a sailor named Charles Moore, who competed in the Transpacific race.

About 90 percent of the debris in all five garbage patches is plastic, says Marcus Eriksen, a marine scientist and founder of the 5 Gyres Institute,which works to reduce pollution from disposable plastics. “This is relatively new if you think about plastic. Only since the 1950s [have] consumers [used] plastics. Now, a half-century later, we are seeing an abundant accumulation of microplastics from all single-use, throwaway plastics like bags, bottles, bottle caps, kitchen utensils. I have pulled cigarette lighters from hundreds of bird skeletons.”

“You can see fish bites, so gradually, the plastic breaks into smaller and smaller pieces,” says Maximenko. “After it reaches certain sizes, it can be ingested and then it quickly disappears.”

The highest concentration of plastics can be found in the North Atlantic garbage patch, which receives most of its content from the United States, Canada, Mexico, and Europe.

Because of its remoteness, the Indian Ocean garbage patch remains more of a mystery. It was discovered in 2010 by Eriksen and his crew, who sailed west from Perth, Australia, toward Africa to document it. Eriksen says it comprises a massive area, at least two million square miles (about five million square kilometers) in size, but with no clear boundaries.

“It’s very fluid and changes with the season,” Eriksen says. “You could drag nets in one spot and come back the next day and it’s different.”

It also has gaps near Indonesia with very little debris. Maximenko theorizes that much of the marine debris generated by the 2004 Indian Ocean earthquake and tsunami has been salvaged by people living along the Indonesian coastline.

The contents of the garbage patch circulate constantly, riding the current known as the Indian Ocean gyre from the Australian side to the African side, down the African coast and back to Australia, Eriksen says. The full rotation takes about six years, unless the debris gets stuck in the center of the patch, where it could remain indefinitely.

If the Malaysian Boeing 777 crashed into the zone off the west coast of Australia where searchers are now looking, and if some of that debris remains undiscovered, it is already on its journey west toward Madagascar to join the rest of the junk in the Indian Ocean garbage patch, arriving in about a year.

Thanks to National Geographic for the original article.