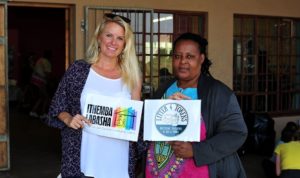 The Stevie Awards, considered the world’s premier business awards, were introduced in 2002 to honour and generate public recognition of the achievements by professionals and businesses worldwide.

The award was given to Clare in recognition of her environmental contributions through Litter4Tokens, which seeks to empower, feed and educate communities on conservation. The organisation also prevents plastic from reaching the oceans through innovative beach clean-up tools that remove harmful microplastics.

“Due to the high unemployment rate and concern about dumping plastic and litter into our rivers, I came up with the Litter4Tokens idea in 2015. Litter4tokens creates the circular economy, and we are working tirelessly for funding to keep our token shops full, as we can’t keep up with all the bags of litter the communities are bringing in.”

The threat of microplastics to the environment

Since the launch, Litter4Tokens has prevented more than 528 000 bags of litter from reaching the ocean, as well as feeding more than 156 000 people in remote communities across South Africa.

“Microplastics are a growing concern because of the disruptive impact on marine ecosystems, as well as the harm to humans as they work their way into our food system,” explained Clare, whose work has also focused on the removable of harmful ‘nurdles’, a base plastic material (also referred to as ‘mermaid’s tears’) melted down to create plastic products.

“We have had another incident of illegal dumping of nurdles in eThewkini rivers, for which we’re still seeking the responsible party, as well as a nurdle spill off the coast of Plettenberg Bay in October,” she continued. “These are the equivalent to a large oil spill and they’re absolutely devastating our ecosystem.”

Clare explained that nurdles make their way into the food chain when fish and other filter-feeding marine creatures mistake them for eggs and miniature jellyfish.

“This concern is further compounded by the discovery that nurdles follow the same ocean currents as turtles. We really need to get on top of this plastic crisis now, the ocean is literally going to choke.”

Solutions to stem the tide of pollution

Litter4Tokens is currently researching legal avenues that will classify the transportation of nurdles as ‘hazardous’, the result of which will ensure proper containment if a spill does occur, preventing nurdles from spreading throughout the ocean.

However, it was the development of the Mermaid Tear Catchers (MTC) which caught the attention of the Stevie Awards’ committee. This is a proprietary, award-winning beach clean-up utensil consisting of a circular disk in the form of a frisbee that can be used to sieve through the dry beach sand, separating organic material from nurdles. When not being used for beach cleaning, the MTC can be used as a frisbee, making it both an educational and fun device.

Launched at the Ballito Pro by Litter4tokens and PETCO, more than 6 500 MTCs were sold, and many more subsequently via their website. The product has received the STOMP 2019 Award from the Commonwealth Litter Programme (CLiP), the Stem the Tide of Plastic Waste Technology 2019 Award, and now a SILVER Stevie® Award in the USA. 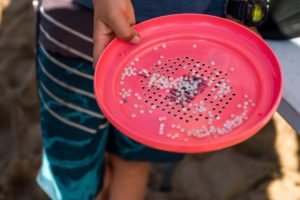 “After such a devastating year, many people are considering giving Christmas gifts that are both environmentally conscious and support global humanitarian efforts as well,” explained Clare. “We’re encouraging those looking for something unique to consider gifting a Mermaid Tear Catcher, with all the proceeds going towards ongoing funding our Litter4Token shops, education and social upliftment.”

Clare expressed gratitude to the entire team for their ongoing commitment and dedication to protecting the planet and its inhabitants, among them Sue Beningfield, Lindsay Hopkins, Debbie Steinhobel, Schane Anderson, Vanessa Coelho, Clare Sykes, Jo Du Plessis and Karina Taylor. Special thanks were also given to the sponsors for continued support, including Olala Interiors, Petco, Tufbags, Cimplicity, The Stretch Foundation, The Big Scoop SA, Lifestyle Centre Ballito and Sea Hugger.

A former KwaZulu-Natal surfer, South African surfing judge and rescue diver, Clare currently resides with her husband and three children in San Francisco, USA. She continues to run Litter4Tokens with the help of her South African team, and has partnered with Seahugger.org in the USA whereby they sell MTCs to the US-based communities to clean plastics on the beaches.