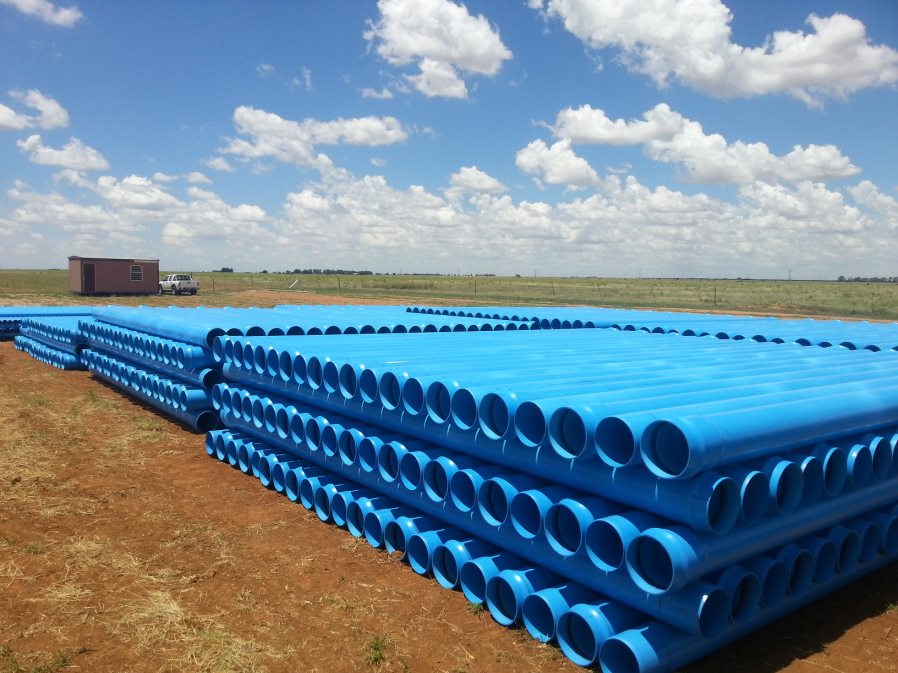 South Africa is currently in the grips of one of the worst droughts in decades, with five of the country’s provinces already declared drought disaster areas. The Western Cape, and Northern and Eastern Cape and Limpopo are the areas facing the most serious lack of water, with the Mother City counting down the days to the predicted “Day Zero”, when the province’s taps will run dry.

Whilst environmental factors such as El Niño and climate change are to a large extent to blame for the country’s crippling water woes, the Southern African Plastic Pipe Manufactures Association (SAPPMA) says that lacking and aging water infrastructure has exasperated the problem.

“We have started to sound the first alarm bells as early as 2010 over the lacking water infrastructure and the failure by local municipalities around the country to invest in upgrading and replacing their pipelines. We saw signs of severe water losses in distribution caused by water leaks and wastage many years before the crisis reached its full impact,” says Jan Venter, Chairman of the SAPPMA – a non-profit association that represents more than 80 % of the plastic pipe produced in South Africa and focuses its efforts on ensuring pipe systems that are leak-free and durable for long-term use. It also focuses on the rehabilitation of old pipelines.

Venter confirms that the impacts of the severe drought could have been negated had their calls for water infrastructure improvements been heeded earlier by the authorities.

“Pipelines lie at the heart of South Africa’s infrastructure and must be replaced before they fail. Water distribution, waste disposal, irrigation and telecommunications all rely on pipelines to function. However, the majority of South Africa’s pipelines were installed in the early 1950’s and 1960’s, and were manufactured from cement, asbestos or steel. These old pipes have an economic lifespan of a maximum of 50 years and have long since corroded and disintegrated. This became evident many years ago as we started seeing an increase in water leaks and disrupted water supplies around the country. Millions of liters of treated water have been going lost every year,” he says.

Towards the end of 2017, the City of Cape Town announced plans to spend R8 billion on its water infrastructure over the next 10 years. According to Anic Smit, Head of Planning, Design and Projects of the City of Cape Town’s water reticulation services, the city has invested R1.2bn on water engineering, refurbishment and replacement infrastructure during the 2015/16 financial year.

Cape Town-based OKE has reported a 20 % drop in irrigation volumes. “Due to the lack of rain, farmers are not investing into new developments and are holding back on capital expenditure for their irrigation”, says David Rossouw, Managing Director of OKE.

However, the company also confirms that they have seen a dramatic increase in demand for HDPE100 pipe typically used for bore holes. “Whist business has dramatically slowed down for LDPE irrigation pipe, we have seen a 100 % growth for larger dimension pipes used for transporting water over longer distances,” he says.

“Many of our customers are involved in initiatives to supply water to communities and water augmentation project. We have seen a huge growth in this area and are working around the clock to keep up with the demand for pipes used in water augmentation schemes and to keep delays to a minimum”. 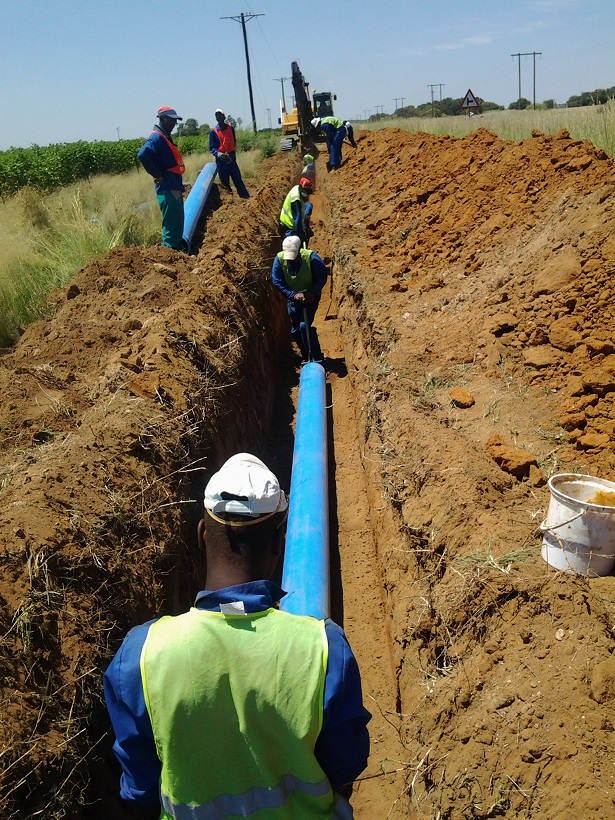 “Intensive planning has already taken place to allow for the scale (and cost) of new and upgraded infrastructure, as well as a number of projects to avert the drought situation. These include desalination plants, groundwater extraction and treated effluent reuse,” Smit said.

During the past 12 months alone, the CoCT has spent at least R500 million on replacing aging infrastructure, repair burst pipes and expand pipelines in and around the Mother City.

“We have installed more than 40 km of HDPE pipes by pipe cracking and open trench methods,” Smit said. “In many cases we have opted for trenchless pipeline methods to fix burst pipes for both water and sewer mains as part of the City of Cape Town’s pipeline replacement initiatives. This reduces the overall project time and proves less disruptive and inconvenient for local residents and road users and allows us to replace long lengths of pipe without digging long trenches”.

The CoCT also supports the recently unveiled master plan by the Department of Water Affairs and Sanitation, entitled “War on Leaks”, whereby national government aims to reduce municipal water losses estimated at R7,2 billion a year due to leaking pipes, from 35% to 15%.

Plastic pipes vs. other materials

“We prefer using plastic pipes and pipe fittings for our City’s infrastructure, because international studies have proven that these pipes last in excess of 100 years. In this regard we follow the example of international metropoles such as London and Sydney where HDPE pipes are being used to replace old infrastructure. When manufactured correctly and meet international standards, these pipes are cheaper, quicker and easier to install, do not rust, the joints are leak-proof (if installed correctly) and have lower failure rates than pipes made from alternative materials,” Smit says.

For this reason, the CoCT insists that all HDPE and PVC pressure pipes being installed bear the SAPPMA mark as guarantee that the pipes comply with the relevant national & international quality standards. 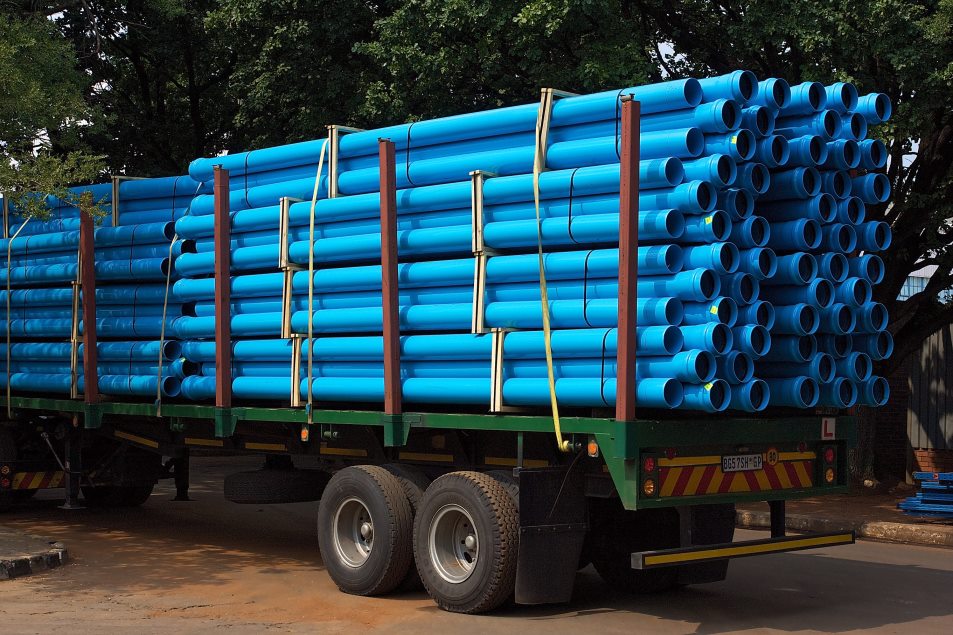 “We have revised our tender requirements and specifications to include SAPPMA as an additional quality reassurance measure. In addition, we are also insisting that all bends on HDPE pipes comply with SANS 6269 and that pipe installers have valid IFPA certificates as it gives us a guarantee and the necessary peace of mind that the pipes we are installing comply with international standards and will be able to do the job for many years to come without the risk of pipe failure”.

Venter adds that HDPE and PVC pipes also offer low frictional resistance. “Their hydraulic properties remain virtually unchanged over its useful life, resulting in lower energy use and pumping costs. Because they are also available in a range of sizes and pressure ratings, are lightweight and easy to handle and to join, it is little wonder that they are the preferred material for modern infrastructure,” the SAPPMA CEO says.

Looking ahead and planning for the future

Commenting on how the Cape Town drought has impacted the future outlook for the rest of southern Africa, Venter says: “It is indeed a very sad reality that our country is currently facing. Because this water shortage will undoubtedly affect the rest of the country’s economy and the way we look at our water resources in future, it is important that we all work closely together to get out of this crisis and prevent a repeat scenario in the years to come.

Apart from relying on plastic pipes to bring the much-needed water from water sources such as desalination plants to communities in the very near future, we also have plan for the long term. Areas elsewhere in the country where water and rainfall are still in abundance, should learn from the lessons learnt by the Western Cape and ensure that they have upgraded their water infrastructure with HDPE and PVC pipes bearing the SAPPMA mark. Investing in replacing old and failing pipes today will allow us to save enough purified water to significantly reduce the impact and long-term effects of the below average rainfall which we are expecting to become the new normal. Consumers, engineers and other decision makers must empower themselves with knowledge and information on the benefits of using plastic pipes versus other materials,” Venter concluded.