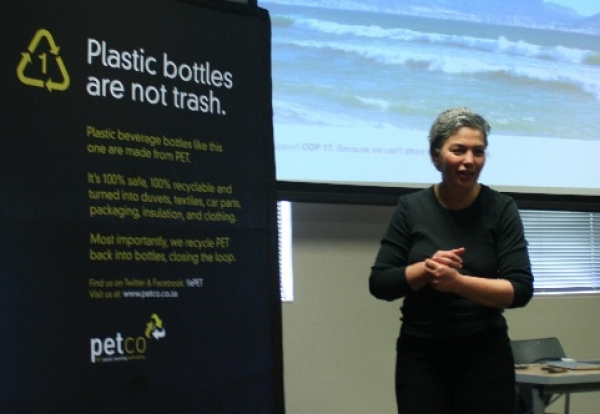 All eyes are on South Africa this year. COP17 is upon us and the world is hoping for global agreement and participation in order to stop the undeniable effects of global warming.

This mark the 17th Conference of the Parties (COP) to the United Nations Framework Convention on Climate Change (UNFCCC) and it is being held in Durban from 28 November to 9 December. At the conference, the 7th meeting regarding the Kyoto Protocol will also be held.

The plastics industry in South Africa decided that the numerous expectations and uncertainties around COP17 need to be discussed, especially those concerning the plastics industry. Plastics are fast becoming one of the main culprits destroying our environment, and PETCO, a local company focusing on the recycling of PET products, decided to address this problem. Workshops were held both in Cape Town and Johannesburg to discuss the great expectations around COP17. Sheryl Ozinsky from PETCO lead the discussions.

We shouldn’t have to fear the future

“We stand on the dawn of a very exciting new era of when the world moves from carbon to no carbon.” Ozinsky is noticeably optimistic about the future, amidst the concerns of global warming. She by no means denies the fact that global warming is real, saying that science undeniably proves it, but she feels that we shouldn’t be afraid to raise children in this world. The technologies and solutions for the problems are there.

“By 2040, we can produce 77% of the world’s requirements with renewable energy sources.” Unfortunately, money hungry governments see it differently. They are reluctant to cut down on carbon, especially if their economies are doing well. So even though their are solutions, it is money, power and politics that prevent countries from uniting toward a less carbon dependent world.

It is well known that the previous two COPs were disastrous and that no real agreements were reached in order to curb the effects of global warming. Countries are too reluctant to sign agreements on a global scale. A lot of pressure rests on the proceedings that will take place in Durban, as science has proven that the earth is in trouble and drastic changes need to be made in order to prolong our future on it.

Another main reason why Durban is under pressure, is because the Kyoto Protocol will come to an in 2012. This has been the only legally binding agreement that has been made on an international scale and many hope that another can be made in Durban. The protocol was drawn up in 1997, at COP3 in Kyoto, Japan. It entered force in 2005 and 37 countries have signed the agreement. Under the protocol, these countries committed themselves to a reduction of four greenhouse gasses namely carbon dioxide, methane, nitrous oxide and sulphur hexaflouride. Even though little measurable results were seen while the protocol was in effect, it reassured many that countries from around the world are trying to work together.

The Carbon Disclosure Project (CDP) as well as the Plastics Disclosure Project (PDP) are two initiatives in which countries from around the world take part. These, even though they’re not legally binding, have proven to be much more successful than any signed declarations. Ozinsky feels that the PDP specifically will receive attention at COP17.

The Plastics Disclosure project originated in September 2010 at the Clinton Global Initiative and encourages people and companies to not only pay attention to their carbon footprint, but also to their plastic footprint. Especially in our oceans, plastic waste is causing great concern. Approximately 7,000,000 tonnes of garbage reaches the marine environment every year. Plastic waste floats on the surface and the prolonged exposure to the sun causes it to turn into a ‘plastic soup’, or gyre. The North Pacific Gyre is estimated to be twice the size of Texas already.

It is therefore clear why attention needs to be paid to the management of plastic waste. The PDP encourages companies to sign up and disclose how much plastic they use and how much of it they recycle. This is not a way for companies to compare and criticise, but a means of motivating them to discard less plastic or manage their waste in a more responsible way.

Ozinsky feels that a new legally binding agreement needs to be reached at COP17, but she is near convinced that this won’t happen.

“The most we can hope for is that some countries will sign declarations to lower their carbon emissions.”

It is also important that more attention is paid to plastic waste management at the conference. Still, many feel reluctant that discussions on such a global scale will yield perceivable results. What remains important is that individuals must continue to make change in their homes. It might be difficult seeing as the public need their Government to support them, but there are many little things that individuals can do to lower their own carbon and plastic footprint.

According to the PDP, it is estimated that 90% of plastics made today do not get recycled. Hopefully this issue will be brought to light at COP17, but even if it doesn’t, recycling plastic is something that can be done on an individual basis. It is vital that we recycle. Our oceans depend on it.