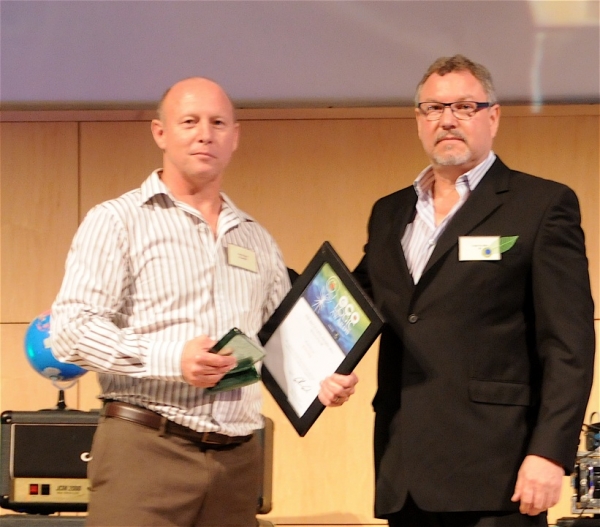 Plastics|SA, the umbrella body representing the plastics industry of South Africa, was awarded the 2011 Enviropaedia Award for Recycling at the inaugural Eco-Logic Awards ceremony which took place in Cape Town on Saturday evening in partnership with The Greenest Event expo.

“We are honouring companies and individuals who are helping us fight both the symptoms and the causes of environmental problems,” said David Parry-Davies, the editor of the Enviropaedia, South Africa’s leading reference to the green revolution and the driving force behind the awards.

Plastics|SA impressed the judges with its ongoing commitment to increase public awareness about the importance of plastic recycling through its various Enviromark activities.

Under the auspice of its Sustainability Director, Douw Steyn, this non-profit organization has launched and driven numerous annual activities through the years, including initiatives such as National Recycling Day, Clean-Up South Africa Week and the international Coastal Clean-Up Day which takes place in September every year.

The Enviromark and its team of eco-warriors have also become a familiar sight at large international sporting events such as the annual Cape Argus/Pick ‘n Pay Cycle Race and the Two Oceans Marathon where they pick up and recycle the litter that gets left behind by participants and supporters.

“Plastics are often unfairly blamed for polluting the environment”, said Steyn after he received the award.

“However, we are trying to educate the public that plastics don’t litter – people do. Used plastic packaging or discarded plastic products shouldn’t end up in landfills. We have a thriving, innovative and successful plastic recycling industry in South Africa that creates new products from virtually every type of plastic – whether it is used water bottles, plastic shopping bags or yoghurt tubs. We are tremendously proud of the Enviropaedia award because it proves to us that our efforts are being recognized. We will continue with our efforts to impact society with our message that “waste is not waste until it is wasted” and plastics are too valuable to waste.”