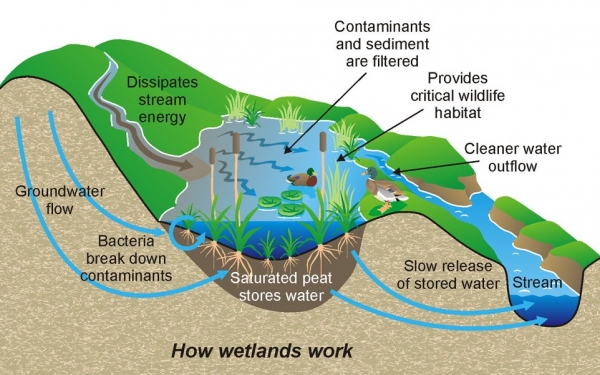 The 2nd of February is International World Wetlands Day and the Endangered Wildlife Trust (EWT) invites you to celebrate this crucial day with us. This year the theme of the day is ‘Wetlands take care of water’ and the aim of the day is to draw attention to wetland habitats and the vital role they play in the environment and the human economy.

In South Africa’s rural areas people are increasingly relying on wetlands for water provision. Wetlands are able to sustainably provide for humans, livestock and wildlife provided that care is taken to protect the catchments which feed these wetlands systems. Poor practices such as ploughing in wetlands and trenching should be avoided at all costs, along with the use of wetlands as dumping grounds for pollution and sewerage.

“Wetlands contribute to the millennium development goals and various relevant South African environmental plans and policies. They also play a key role as a wildlife habitat, most notably for our crane species. Cranes are highly dependent on wetlands for their survival. All three of our crane species forage in wetlands. Grey Crowned Cranes, Wattled Cranes and occasionally Blue Cranes (South Africa’s National Bird) breed in wetlands and the most significant threat to these species has been the loss of their wetland habitat through unsustainable use of these important ecosystems,” continued Franke.

To highlight the plight of our wetlands and the work the EWT is doing to reverse the decline and destruction of this habitat, we will be hosting various activities around the country. The details for the planned World Wetlands Day activities are as follows:

Join the EWT and the Wildlife and Environment Society of South Africa (WESSA) for a wetland walk near Underberg on Saturday, the 2nd of February, to celebrate the area’s wetlands which are also habitat for all three of our crane species. As part of the stewardship project, the African Crane Conservation Programme is conducting wetland assessments in the district.

The aim of these assessments is to determine the state of wetlands, their functioning and to recommend rehabilitation actions if required. While some wetlands in the district have suffered historical damage and require rehabilitation, one of the wetlands assessed thus far, has scored an “A” rating – which means that it is still in a near natural state and completely functional. This is great news and we hope that our assessments in the future will reveal other wetlands that are worth celebrating. Please contact Cobus Theron at 033 701 1323/079 508 2156 or cobust@ewt.org.za as places are limited

Join us for a talk at the Karkloof Country Club on Thursday, the 7th of February, by world renowned crane expert, Dr George Archibald, from the International Crane Foundation (ICF), on the ICF/EWT partnership’s work in Uganda, Kenya and Rwanda in recent years. Biologists have documented unfathomable declines of up to 80% in Grey Crowned Crane populations in East Africa, and this decline has mirrored the rapid decline in wetlands and grasslands over the last 30 to 40 years.

George promises to bring to life ‘East Africa’ through the stories of culture, trials and tribulations that come with conserving a species so closely associated with people in Africa. Booking is essential, so please contact Tanya Smith on 082 394 7476 / tanyas@ewt.org.za

Join the EWT, Eastern Wetland Rehab (EWR) and Eco-club learners and teachers from Lake Chrissie Secondary School for a wetland clean-up in Kwa-Chibikhulu, Chrissiesmeer on Friday, 8 February. These learners are our conservation ambassadors in the community. Steven Segang from the EWT will give a talk on wetlands and their importance to birds, including the cranes, followed by Sibhudu Thomo from EWR who will talk on their wetland rehabilitation work. We will then walk down to the wetland, which flows through the township and drains into Lake Chrissie, to do a litter clean-up. Please contact Ursula Franke at 083 3328859 or ursulaf@ewt.org.za if you would like to join us.