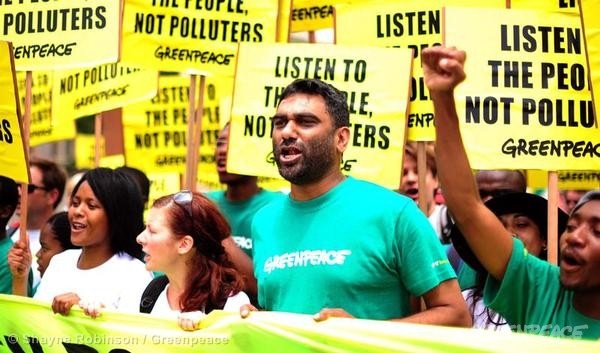 An open letter to the governments of the world meeting in Durban.

Welcome to our city.

We remember a time in Durban – indeed, a period in the history of this nation of South Africa – when we feared that the apartheid states’ intransigence would spark a conflict in which much blood would be shed. But even at our lowest ebb, even when the injustice we faced seared through every minute of every day, our people stood firm in the knowledge that justice itself would defeat a system that put different values on different people based on nothing more arbitary than the colour of their skin.

Now, twenty years after our victory, in the remaining hours of the Durban climate talks, with great urgency we call for a similar breakthrough – one as unexpected, as deserved and as vital as South Africa’s transition to democracy

You may not have felt it inside the rarified air-conditioned corridors of the conference centre, but a restless anger stalks this land – an anger driven by a new apartheid that has trapped close to half of humanity in a deadly embrace of poverty, inequality and hunger. Our institutions – local, national and global, across public and private sectors – are rapidly losing legitimacy. A mistrust that is driven by the human greed of a minority has plundered the hopes and aspirations of the majority. People sense it at a visceral level, this year alone it has toppled dictators, and someday soon – perhaps not this year or the next, but someday soon – the victims of rising temperatures will similarly find their voice.

Africa’s population is scheduled to reach two billion people by 2050, while over three quarters of those human beings will be under 25 years of age and living in overcrowded urban slums. Their carbon footprint is practically zero but these communities will bear the brunt of your failure – if that is what you decide upon – here in Durban. If the agreement you make is to embrace a dead decade of climate inaction then the name of our city will be remembered as the place you condemned our continent.

Even today the resilience of our agricultural systems is stretched to breaking point. The Horn of Africa, where 13 million people are at risk of famine, is just the beginning. A major humanitarian crisis is looming in West Africa affecting Mali, Burkino Faso and Niger where the nexus of food insecurity, hunger and malnutrition is chronic, systemic and damning.

And you want to hand us another degree of heat, and another one after that, and after that another?

You are heads of state, ministers and diplomats. The fact that you are here, charged with delivering a solution, makes you among the most powerful men and women who ever lived. Whether you choose to exercise that power is in your gift.

A moral and political responsibility

A tremendous moral and political responsibility has been visited upon you, but also the privilege of being the people – in this place, at this time – who can shift our world onto a new path. You can listen us, the people, and put our needs and a sustainable environment above what you may feel is your national interest.

But please believe us when we say there is no such thing as national interest any more. Just as apartheid was a profound moral challenge to the world, the effects of climate change know no borders. Conflict and mass migration will touch your shores if the thermostat continues to rise.

Here in Africa an unpredictable climate is like a powder keg. Our food systems have stood on fragile ground in even the best of times. We have gone from a net exporter of food in the 60s to being dependent on food aid today. Responsibility for success here does not lie only with the nations who ask us to carry the climate burden as this century unfolds. African leaders also need to take a stand. This is our issue. Close to four out of five Africans depend directly or indirectly on agriculture for their livelihoods. It provides 70% of Africa’s full time employment, one third of total GDP and earns us 40% of total export earnings. Importantly too, the majority of farmers in Africa are women, and women are (and will continue to be) in the eye of the climate storm. For every degree Celsius rise in temperature above the growing season optimum, farmers can expect a 10 percent decline in grain yields.

Not a problem for the future

This is not a problem for the future. We are not speaking in abstracts, because climate change is having a devastating effect on food security now. The evidence is there. The impacts are being felt now. The high cost of food is a recurring serious threat to economic development and social stability. Don’t take our word for it, just look at the Middle East and North Africa, whose Arab Spring had its origins in hunger and the high cost of food. Before the first protests began, the price of bread had jumped 30% within a year, due to global shortages of wheat. Imagine what multiple degrees of temperature rises will do to our harvests, and what that in turn will do to the urban slums and their teeming billions.

So please, do not squander this moment. You must provide real money for us to adapt to this threat and develop our economies without exacerbating it. Make good on your years of promises, put over a hundred billion on the table and the infrastructure to collect and distribute it effectively. Ensure it serves the most vulnerable countries and communities. Don’t tear up Kyoto – the global rule book for how to save our continent. Doing so would be like us in South Africa tearing up our constitution after every election and starting afresh. The nations which want to kill Kyoto want to do so because they favour more chaos, argument and inaction.

We ask you all, what are your priorities? As you huddle in the corridors discussing frameworks and redesigning paradigms or circling the stratosphere on your busy schedules, our pastoralists on the plains of East Africa walk in search of water, herding with guns as the conflict over scarce resourses begins.

“Sekunjalo ke nako” – now is the time to act. It was our lodestar in our struggle for freedom from institutionalised racism. We call on you to act decisively before the burning frustration of Africa’s legitimate unmet expectations explodes. Friends from around the world who have gathered in Durban, climate justice is not an abstract aspiration, it is a moral imperative and one which we expect you to meet. Historic responsibility must be accepted and met. It is your job to lay the foundation on which all nations accept limits to their carbon growth. It is your responsibility to provide the impetus for a just transition to a low carbon future, to fuel a green race to the future.

You have loaded our atmosphere with a carbon debt. Do not pass the bill to the continent of Africa.

Kumi co-authored this letter with Jay Naidoo, the first Cosatu secretery-general who now chairs the Global Alliance for Improved Nutrition.