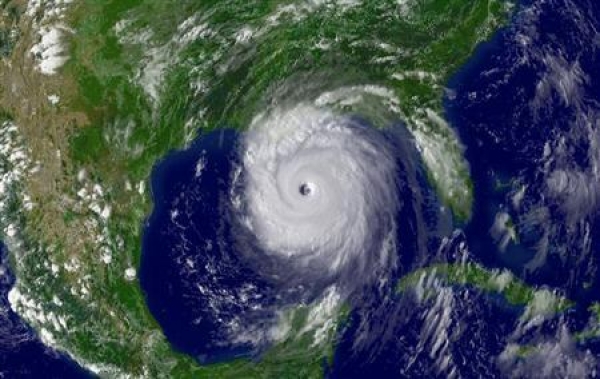 The number of Atlantic storms with magnitude similar to killer Hurricane Katrina, which devastated the U.S. Gulf Coast in 2005, could rise sharply this century, environmental researchers reported on Monday.

Scientists have long studied the relationship between warmer sea surface temperatures and cyclonic, slowly spinning storms in the Atlantic Ocean, but the new study attempts to project how many of the most damaging hurricanes could result from warming air temperatures as well.

The extreme storms are highly sensitive to temperature changes, and the number of Katrina-magnitude events could double due to the increase in global temperatures that occurred in the 20th century, the researchers reported in the journal Proceedings of the National Academy of Sciences.

If temperatures continue to warm in the 21st century, as many climate scientists project, the number of Katrina-strength hurricanes could at least double, and possibly rise much more, with every 1.8 degree F (1 degree C) rise in global temperatures, the researchers said.

The U.N. Intergovernmental Panel on Climate Change has run computer simulations suggesting global temperatures could rise by between 3.6 degrees and 10.8 degrees F (2 degrees and 6 degrees C) by century’s end.

To figure out how many of the most extreme hurricanes these higher temperatures might spawn, Aslak Grinsted of the Center for Ice and Climate at the University of Copenhagen and his co-authors looked at storm surges, which are often the most damaging aspect of these monster storms.

A storm surge is the abnormal rise in water, over and above normal high tide, pushed toward shore by the winds whipping around a big cyclonic storm. Much of the damage from Hurricane Katrina, an estimated $108 billion, was caused by high storm surges across a wide area of the Gulf of Mexico coast, according to the National Oceanic and Atmospheric Administration (NOAA).

The researchers looked at storm surges going back to 1923, and related those to how warm air temperatures were when the surges occurred. Then, using computer models, they projected how storm surges might be influenced by future warming.

Storm surges can be a more accurate gauge of a hurricane’s severity than wind speed, like those on the Saffir-Simpson hurricane wind scale, Grinsted said by phone from Denmark.

“When people talk about (hurricane) intensity normally, then they mean wind speed,” he said. “But that is not what is causing the most damage only. Sometimes it’s about how fast it is traveling.”

He said that was the case with Sandy, which traveled so slowly and stretched over such a wide area that its impact was intense, even though wind speeds abated somewhat by landfall.

Previous research on the link between climate change and hurricanes has suggested that there may be fewer hurricanes overall but more stronger ones as global temperatures rise.

This study indicates there will be an increase of hurricanes of all magnitudes, but the increase will be greatest for the most extreme events.