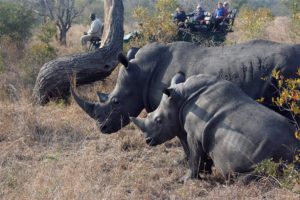 A rhino poacher who killed a cow and her baby rhino in 2015 was sentenced to an effective 30 years in prison on Wednesday.

Norman Khoza (35) was convicted on eight poaching and firearm-related charges in the Mhala Regional Court.

The two rhinos were poached at Nwanetse in the Kruger National Park.

To secure the sentence, state prosecutor Adv Ansie Venter argued that Khoza showed a lack of remorse and called the killing of the mother and baby “brutal and heartless”.

She also cited the plight of rhinos, the immense strain poaching put on rangers, its detrimental effect on the economy, and the public outcry for justice for the rhinos in intensification of sentence.