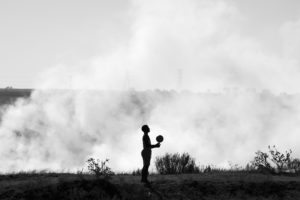 Every day, people living and working on the Mpumalanga Highveld are breathing toxic, polluted air that is harmful to their health and well-being. This is the basis of the Deadly Air case, which will be heard by the North Gauteng High Court in Pretoria on 17 to 19 May 2021.

The applicants in the court case, environmental justice groups groundWork and the Vukani Environmental Movement (VEM), launched this Constitutional litigation in June 2019, requesting the court to declare that the poor ambient air quality in the Highveld Priority Area constitutes a violation of the Constitutional right to an environment not harmful to health or well-being. They are also asking the court to order the government to take further steps to improve the air quality in the area. The applicants are represented by the Centre for Environmental Rights.

The United Nations Special Rapporteur on Human Rights and the Environment, Prof David Boyd, was admitted as an amicus curiae (friend of the court) in the case by the Pretoria High Court on 5 November 2020. Professor Boyd is represented by Lawyers for Human Rights (LHR). Submissions will be made to the court on his behalf during the hearing.

The Highveld Priority Area – formally declared a pollution hotspot by the Environment Minister as long ago as 2007 – flanks Johannesburg and Pretoria, and includes large parts of Gauteng and Mpumalanga. It is home to over 3.5 million people. The poor air quality has significant and direct impacts on human health and well-being, causing premature deaths and chronic respiratory and other illnesses. Children and the elderly are particularly vulnerable to the dangerous levels of air pollution.

An expert study shows that Eskom’s 12 coal-fired power stations, Sasol’s Secunda plant, and the nearby NatRef refinery, are responsible for the lion’s share of the air pollution in the Highveld Priority Area.

After many delays in responding to this court application, the government respondents belatedly filed their notice of opposition in September 2020. Following a case management meeting between the parties, the Registrar of the Pretoria High Court issued directions on 10 November 2020, confirming the May 2021 hearing, and that the government respondents are to file their answering affidavit (defence to the applicants’ claims) by 29 January 2021.