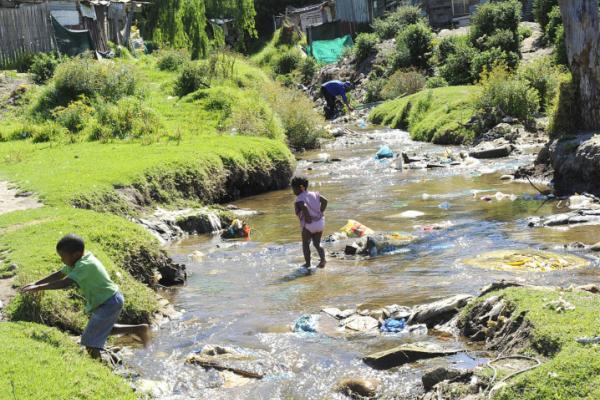 Ecoli in the Sir Lowrys Pass river and hence the ocean at Gordons Bay is an issue that activists from the Helderberg are now fed-up with. Squatter camps in the village are suffering from a shortage of proper sanitation and sufficient waste disposal, so the river is used to dump unwanted things into.

The City of Cape Town responded with the folllowing statement by the Mayoral Committeee Member for Health, Councillor Benedicta van Minnen:

The City of Cape Town has dealt with a number of queries around water quality in recent months, specifically around the presence of E. coli in some of our stormwater systems. A number of recent media reports have further amplified the issue without necessarily presenting the full picture, including the many challenges that the City grapples with in terms of pollution and illegal dumping.

The City does not test marine species, but it has an extensive water sampling programme in place to monitor and manage the water quality in the stormwater network (including river systems and vleis) as well as coastal waters, in accordance with national legislation.

Treated effluent entering the river systems from wastewater treatment works is sampled on a weekly basis, while the quality of inland and coastal waters is monitored every second week. The appropriate manner of testing is to weigh each single sample result against a number of fortnightly samples collected over a period of three months. A single sample result does not provide adequate information to draw any specific conclusions about water quality trends.

We have established sample sites along both the False Bay and Atlantic coastlines that are determined by popular bathing beaches and the vicinity of stormwater discharges and river mouths to ascertain the impact that these have on seawater quality. The water quality is well within allowable limits and all of our beaches are safe for bathing. Cape Town has the highest number of Blue Flag beaches – four of the eight beaches are along the False Bay coast at Mnandi, Strandfontein, Muizenberg and Bikini Beach in Gordon’s Bay.

When Environmental Health Practitioners detect pollution in water bodies that could present a risk to human health, health warning signage is strategically placed in the affected areas to warn the general public of contamination present in the water body, and thereby discourage them from using it for any recreational purposes, as was the case in Milnerton recently.

Rivers passing through urbanised areas are not suitable for human interaction as they are typically impacted to a degree by background pollution that gets washed into rivers when it rains, as well as point sources like blocked or overflowing sewers and other pollutants dumped directly into the rivers. Sewer blockages are usually the result of illegal dumping by members of the public. In the last financial year, the City unblocked more than 100 000 sewers at a cost of R311 million.

Another ongoing challenge is increased urbanisation that results in people settling in areas that are not suitable for habitation, thus making the provision of services difficult. It is worth noting though, that in the Sir Lowry’s Pass informal settlement, the City has installed 45 taps and nearly 600 toilets including portable flush and full flush toilets. An additional 100 full flush toilets and 30 taps are due to be installed before the end of this financial year.

While it is important to distinguish between potable and non-potable water, it is worth reminding the public that Cape Town consistently secures accolades for the quality of its drinking water. The City of Cape Town has maintained and improved its Blue Drop status since the inception of the Department of Water Affairs’ Regulatory Performance Management System in 2008 – this is no small feat. Sustaining the quality of our water and saving water is everyone’s business and cannot be a one-way street. Pollution and dumping happen around us every day – even if you are not polluting, are you doing something about the next person who is?

The City has an ongoing education and awareness campaign that covers illegal dumping, the danger of using river water for recreational purposes, and associated health concerns like diarrhoea and personal hygiene, but we need the public to play a role. I would encourage residents to report any leaks, potential spillages, acts of illegal dumping, or any other water-related concern to the City’s call centre on 0860 103 089.