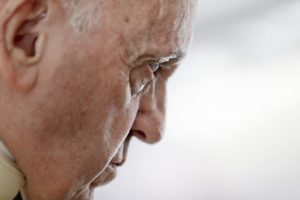 Pope Francis talks to reporters during a press conference he held on an aircraft taking him back to Rome from Romania. Image: AP Photo / Andrew Medichini

Speaking to oil company executives, Pope Francis on Friday said that climate change “threatens the very future” of humanity, adding that the “doomsday predictions” can no longer be met with disdain.

“Time is running out!” Francis said. “Deliberations must go beyond mere exploration of what can be done, and concentrate on what needs to be done. We do not have the luxury of waiting for others to step forward, or of prioritizing short-term economic benefits.”

“The climate crisis requires our decisive action, here and now and the Church is fully committed to playing her part,” he said.

This is the second year that oil executives have gathered in Rome at the invitation of the Vatican’s Dicastery for Integral Human Development and Notre Dame University’s Mendoza College of Business. The theme of this year’s meeting is “The Energy Transition and Care for our Common Home.”

Francis quoted his environmental encyclical Laudato Si’, saying, “For too long we have collectively failed to listen to the fruits of scientific analysis and ‘doomsday predictions can no longer be met with irony or disdain’.”

“Any discussion of climate change and the energy transition must be rooted then in the results of the best scientific research available today, letting them touch us deeply,” he added.

Quoting a report from the United Nations Intergovernmental Panel on Climate Change, Francis noted that the world has a decade or so to guarantee that global warming causes temperatures to rise no higher than 1.5 C above pre-industrial levels, a threshold outlined in the 2016 Paris Agreement.