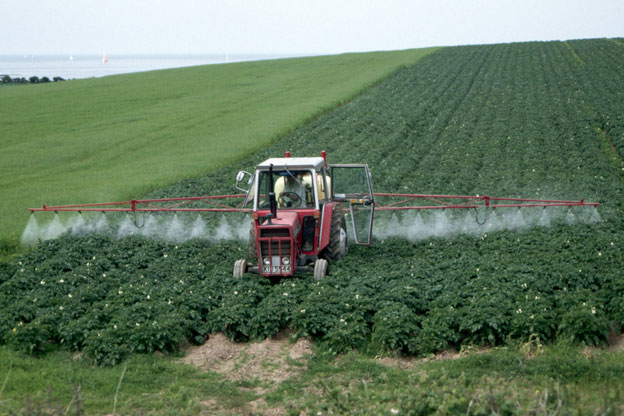 Have you ever wondered why lately so many people are “gluten intolerant?” I have long held and expressed the opinion that it is not the wheat that’s at fault. Something else must be slipping into the wheat. Now a compelling new peer-reviewed report from two U.S. scientists argues that increased use of Monsanto’s glyphosate herbicide (trade name Roundup) could be the cause of the epidemic of symptoms labeled as “gluten intolerance.”

Farmers are now using glyphosate not only to control weeds but also to dry down wheat, rice, sugarcane and other crops just before harvest, resulting in higher residues in the foods we eat. The abstract from the paper “Glyphosate, Pathways to Modern Diseases II: Celiac Sprue and Gluten Intolerance” is below.  You can read the full report and view graphs in the Slideshow connecting increased use of glyphosate with growing rates of celiac incidence, deaths from intestinal infections, acute kidney disease and deaths due to Parkinson’s (link at end of article).

Celiac disease, and more generally, gluten intolerance, is a growing problem worldwide, but especially in North America and Europe, where an estimated 5 percent of the population now suffers from it. Symptoms include nausea, diarrhea, skin rashes, macrocytic anemia and depression. It is a multifactorial disease associated with numerous nutritional deficiencies as well as reproductive issues and increased risk to thyroid disease, kidney failure and cancer. Here, we propose that glyphosate, the active ingredient in the herbicide, Roundup, is the most important causal factor of this epidemic.

Fish exposed to glyphosate develop digestive problems that are reminiscent of celiac disease. Celiac disease is associated with imbalances of gut bacteria that can be fully explained by the known effects of glyphosate on gut bacteria. Characteristics of celiac disease point to impairment in many cytochrome P450 enzymes, which are involved with detoxifying environmental toxins, activating vitamin D3, catabolizing vitamin A, and maintaining bile acid production and sulfate supplies to the gut.

Glyphosate is known to inhibit cytochrome P450 enzymes. Deficiencies in iron, cobalt, molybdenum, copper and other rare metals associated with celiac disease can be attributed to glyphosate’s strong ability to chelate these elements. Deficiencies in tryptophan, tyrosine, methionine, and selenomethionine associated with celiac disease match glyphosate’s known depletion of these amino acids. Celiac disease patients have an increased risk to non-Hodgkin’s lymphoma, which has been implicated in glyphosate exposure.

More glyphosate residues in wheat due to crop desiccation

Glyphosate residues in wheat and other crops are likely increasing recently due to the growing practice of crop desiccation just prior to harvest. We argue that the practice of “ripening” sugar cane with glyphosate may explain the recent surge in kidney failure among agricultural workers in Central America. We conclude with a plea to governments to reconsider policies regarding the safety of glyphosate residues in foods.

How much is Roundup used in South Africa? Plenty! Branded as a ‘safe’ herbicide it is highly popular in our agricultural sector. Our local municipalities also use this to control ‘weeds’ in our suburbs, with dire health consequences to many. Have you experienced any of this?  Green Times will research this further and follow up. Do be in touch if you have a story to share.