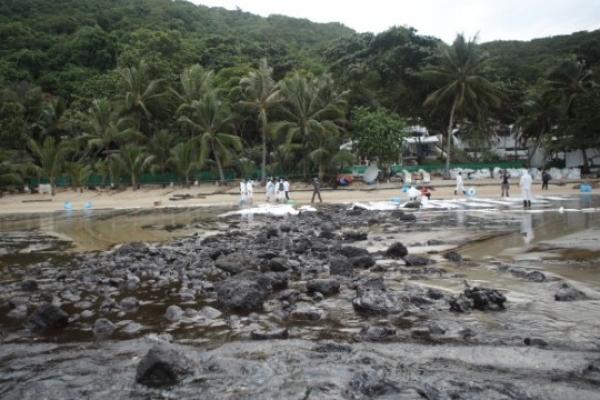 An oil spill that prompted evacuations from one of Thailand’s most popular tourist spots threatens the country’s tourism and fishing industries, Thailand’s deputy prime minister has warned, amid concerns about the long-term effects of the leak.

Deputy Prime Minister Plodprasop Suraswadi said his country was ill-equipped to properly contain the leak, and authorities should seek assistance from neighboring countries such as Singapore, if necessary. He made the comments Tuesday during a trip to Mozambique, according to Thai government spokesman Teerat Ratanasevi’s Twitter page.

PTT Global Chemical, Thailand’s largest petrochemical producer, admitted a leak had occurred after the waters at Ao Phrao (Phrao Bay) on the popular tourist island of Koh Samet were blackened with oil on Sunday, prompting evacuations of tourists.

The company admitted that an estimated 50,000 liters of crude oil had leaked from an offshore pipeline around the area of Rayong’s Map Ta Phut deep sea port Saturday.

The company’s president, Bowon Vongsinudom, told CNN Tuesday that he did not know how the leak had occurred.

He said the clean-up, which also involved the efforts of the Royal Thai Navy and volunteers, was progressing well. “We can see developments which is much better. We can see now the white water.”

But Greenpeace has said the clean-up efforts are just beginning, and the long-term impacts of the oil were yet to be appreciated.

Vongsinudom’s account was “not the complete picture,” said Greenpeace Thailand’s program manager Ply Pirom. “We want to know the real impact of the oil leak, and a comprehensive investigation of the environmental impact is needed.”

The clean-up effort had relied heavily on spraying the oil with dispersant, which made it sink below the water — out of sight, but potentially harming marine life. “It’s now under the sea, which will create a long term impact.”

One Thai academic believes the leak could up to twice the size of that admitted by PTT Global Chemical.

Somporn Chuai-Aree, a professor of mathematics and computer science at Songklanakarin University, estimated the true size of the leak “could be from 75,000 liters up to 100,000 liters.”

“We have to try to get a good estimate of the size of the leak, because it will affect the scale and preparation of the work the company needs to do to get the clean-up done,” he said.