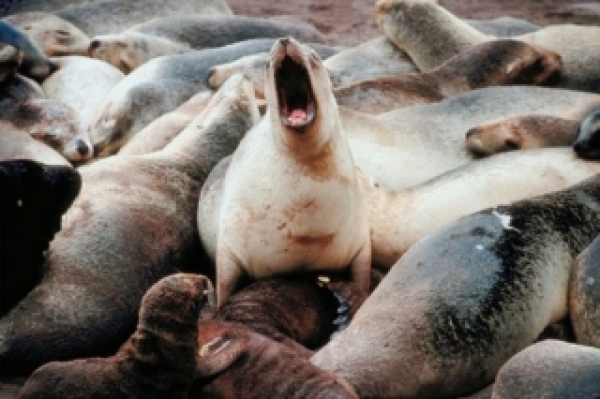 With only a month to go before the Namibian seal hunt begins, The Seals of Nam are pulling out all the stops and are urging the Namibian government to end the annual carnage of Cape Fur seals.

The Ombudsman’s report was initially due in March. It was then postponed to May, the reason given that Adv. Walters is awaiting the results of an aerial survey. With the government unable to produce a complete survey from 2007 onward, it seems very unlikely that the results from a survey undertaken in December of 2011 will be finalised before the start of the slaughter season. As such, it seems like the Ombudsman’s meeting held in September last year was a stall tactic employed by the government so as to proceed with this year’s killing spree. Hopefully this isn’t the case.

Last month The Seals Of Nam launched the “47 days of Activism” as a count-down to 1st July. They delivered a petition with 22 000 signatures to the Namibian Ombudsman Adv. Walters, requesting that he declare a moratorium on all seal killings until  his report is finalised.

In the US, their directors flew to Los Angeles to attend a reunion of the American Film Institute, armed with 200 full-sized posters showing graphic depictions of the seal hunt. These were handed out to producers, actors and Hollywood celebrities.

They then launched a new petition through Avaaz, the world’s largest and most effective online petition site. This petition is directed at Minister of Fisheries and Marine Resources, Bernard Esau. Within seven days this petition already generated over 8 500 signatures, including many Namibians.

Two South African artists recorded songs written specifically to raise awareness regarding the atrocities of the Namibian seal hunt and these songs have been uploaded to YouTube and are being shared across various social networking sites. Check out one of these below:

The African Conservation Foundation has joined as the newest member of their coalition. In an email communication, the Director of Conservation, Arend de Haas confirmed his organisation’s full support for the campaign to end the Namibian seal hunt.

The Seals of Nam contacted the Adventure Travel Trade Association (ATTA) to voice their objections to Namibia hosting the Adventure Travel World Summit in 2013 on the grounds of the annual slaughter. Ethical Traveller, who dropped Namibia from its ‘Top Ten List of Ethical Destinations’ last year because of the massacre also contacted ATTA requesting that Namibia be excluded as potential candidate. ATTA’s inspection committee visited Namibia last week.

They are now adding the final touches to their “Beach Masters Campaign.” Volunteers will be traveling to the country on a fact-finding mission to see which NGO’s they can work with in the future. They believe this to be the first step in breaking the international consumer boycotts once the hunt is permanently called off and the seals become protected with effective legislation.

The idea is that the seal colony can be developed as an iconic brand for Namibia. If Paris can have the Eifel Tower and China can have their wall, what is stopping Namibia from marketing the seals as a massive draw-card, instead of beating them to death? They will gladly use their international outreach to assist the country in any such marketing once the massacre is ended.