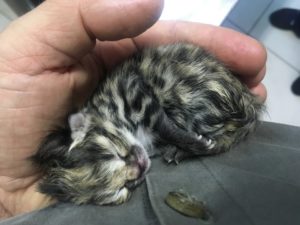 It’s one life down and eight to go for three protected black-footed kittens that were recently delivered by caesarean section after their mother, Athena, who has a history of lethargy and depression, was brought to the University of Pretoria (UP) Faculty of Veterinary Science’s Veterinary Academic Hospital.

“The black-footed cat (Felis nigripes) is one of South Africa’s smallest and most enigmatic wild cat species. Their numbers, both in the wild and in captivity, are rapidly declining and they are currently listed as vulnerable on the IUCN Red List (2006) and are also listed under Appendix I by the Convention on the International Trade of Endangered Species (CITES),” said UP wildlife vet Dr Katja Koeppel, who performed the surgery.

Athena was brought to the Lory Park Zoo and Owl Sanctuary in Midrand, Gauteng, as a six-month-old kitten. Found during harvest season on a farm near Lichtenburg, she was paired with a male and became pregnant. 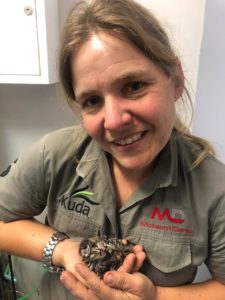 Black-footed cat gestation is similar to that of a domestic cat (63 days), said Dr Koeppel. “She was monitored throughout her pregnancy as it was her first litter and she was very large.”

Presenting with lethargy and depression, Athena was taken to UP’s Faculty of Veterinary Science’s Veterinary Academic Hospital. According to the manager of Lory Park Zoo, Kara Heynis, the pregnant cat was five days overdue, putting the lives of the kittens and mother in danger.

“Ultrasound of the female showed two healthy foetuses and one where no heartbeat could be seen. Radiographs of the female confirmed three kittens in utero. As the female was lethargic and the foetuses very large and overdue I decided to operate,” said Dr Koeppel. 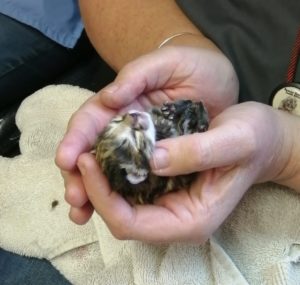 Three kittens, two female and one male, were removed from the uterus. “The male was presenting without breathing or audible heartbeat but Dr Dorianne Elliot, Head of the Bird and Exotic Animal Clinic, managed to successfully resuscitate him,” said Dr Koeppel.

All three kittens are now being hand-reared by Heynis and are gaining weight. They will become part of the captive black-footed cat breeding programme at the zoo to combat the decline of this species.

Heynis said mom Athena had also made a great recovery. 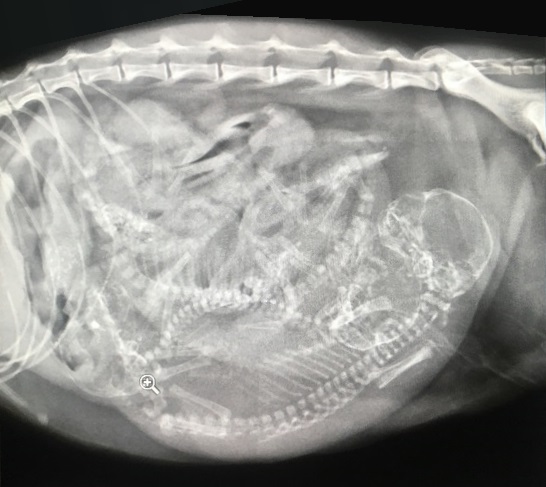 “She is chasing anyone that comes too close out of her enclosure, which is normal behaviour for a black-footed cat,” she said.

Earlier this year, Dr Koeppel and Dr Elliot were part of a team that nursed distressed lesser flamingo (Phoeniconaias minor) chicks back to health.

The chicks were brought to Gauteng from Kimberley with the assistance of a group of Kimberley residents and the Kimberley SPCA after they were abandoned by their parents because of the low water level of the Kamfers Dam. Many of them died as a result of dehydration and starvation. The conservation status of the lesser flamingo is close to threatened, according to the IUCN Red List.