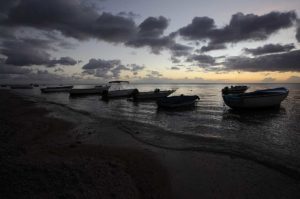 During my time as an oceans campaigner at Greenpeace, I’ve sat in a tiny boat in the middle of the Indian Ocean, watching a fishing boat pull in miles of drift nets. The nets were full of tuna, but there were also dead spinner dolphins, manta rays, thresher sharks and more – a grim demonstration of devastation at sea. I’ve been right up close with some of the biggest fishing vessels in the world, watching as they haul out incomprehensible numbers of fish.

But I’ve also sat in rooms with representatives from fishing communities, people who rely on fish for their food and livelihoods, who are struggling to scratch together a living and are looking ahead at a bleak future. There’s no simple solution to fix both.

Seeing the destruction of the natural world, both on land and at sea, has moved more and more people to become vegan. This is a hugely positive thing: the more people that turn to a plant based diet, the better it will be for the planet. But although it might be part of the puzzle, veganism isn’t the silver bullet for our oceans. A campaign that focuses only on veganism ignores the billions of people that depend on the oceans for survival. And without finding a lasting solution that looks after people and planet, our oceans don’t stand a chance.

Greenpeace has joined with scientists, civil society and many governments around the world to propose that at least 30% of the world’s oceans are protected by 2030 and the remainder is managed sustainably and in the public interest. Finding this balance between the two is a route to restoring the health of our oceans that also builds solidarity with frontline communities and safeguards livelihoods and human dignity. Join their chorus here.

Across the world, the climate is changing and nature is under pressure. Perhaps nowhere is this felt more acutely than along the world’s coastlines. More than three billion people depend on the ocean for their primary source of food and for their livelihoods and many of these communities are finding the fish they have caught for generations are disappearing. We need an ambitious Global Ocean Treaty to help put at least 30% of the world’s oceans off limits to most human activity, creating oceans sanctuaries for fish and other ocean wildlife to recover and thrive. That would ensure the oceans recover, are more resilient to threats like climate change and that communities everywhere continue to live in harmony with them.

The other side to campaigning for ocean protection is standing up to the global industrial fishing industry, which remains one of the greatest threats to ocean health and to communities dependent on low impact, more sustainable fishing. Greenpeace has been campaigning against destructive fishing for decades and we’re not stopping now. In just the last few years we’ve taken on the world’s biggest tinned tuna company; we’ve dropped boulders to prevent harmful bottom trawling inside protected areas, and we’ve put our bodies in the way of unregulated fishing in the South-West Atlantic.

We are an organisation of passionate and dedicated people willing to put themselves on the line for nature. Over the last decade we’ve also stood alongside local fishing communities in court cases supporting their right to fish over multinational companies and we’ve advocated on behalf of migrant fishers for better working conditions onboard the world’s distant water fishing vessels. A campaign for ocean protection has to have the rights of those who depend on the ocean at its centre. 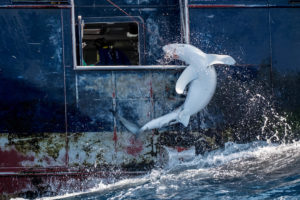 A shark is hauled into the hold of the Pedra da Grelo, a Spanish longliner targeting swordfish in the south Atlantic ocean. Image: Tommy Trenchard

There are many dietary lifestyles, including veganism, that offer a better way forward for protecting the planet. We are proud to work alongside our allies in animal rights organisations towards our common goal: ending the disastrous expansion of industrial meat and dairy, and reducing meat, dairy and fish consumption and production worldwide.

For years, Greenpeace has been telling our supporters that eating less fish and eating a more plant-based diet is key for ocean health. But campaigning for a blanket ban on fishing would undermine the rights of people worldwide who depend on the oceans for their food and livelihoods and who are in desperate need of allies prepared to speak up on their behalf. Many coastal communities live in harmony with nature, not taking more from the ocean than it can give.

Many, especially in the Global South, are amongst the most vulnerable in the world, fighting multiple threats including climate change and overfishing – both catastrophes that have been largely caused by the privileged Global North. We need these communities’ collective power to help pressure governments to agree a strong Global Ocean Treaty – we see throughout history that change happens when we work together.

I know it’s not a simple solution and it’s definitely not easy – and I know from watching first-hand the wanton destruction of marine life, it’s a devastating situation. But it is the right thing to do. And if we get it right, it could mean I never have to watch another shark pulled out of the ocean by a factory ship, or to meet with another fishing community that’s seen their way of life destroyed by big business.

By Will McCallum, head of oceans at Greenpeace UK