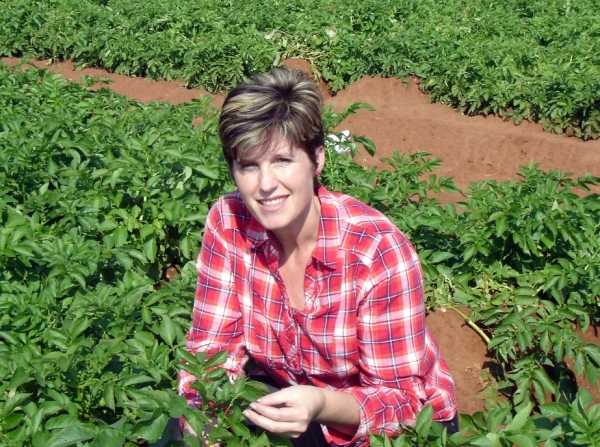 This is the advice of Dr Reinette Gouws, who in March 2013 received her doctoral degree in plant pathology in the Faculty of AgriSciences at Stellenbosch University. She focused on the occurrence and spread of common scab causing Streptomyces bacteria and how it can be managed naturally by biofumigation methods when potatoes are planted after incorporation of Brassica plant residues.

Her doctoral research, which was carried out in six South African potato producing areas, was partly funded by Potatoes South Africa.

Streptomyces organisms which cause common scab are found naturally in the soil. It is not harmful to consumers. However, it does cause unsightly cosmetic scars which leave consumers hesitant to buy affected potatoes. This can lead to losses to farmers and stores.

“The current products and management programmes used by commercial farmers, the upcoming agricultural sector and the processing industry to manage common scab are simply not adequate,” said Dr Gouws, a phytobacteriologist of the Agriculture Research Council (ARC) who has been focusing on potato production and diseases for the past 18 years.

Her PhD research at Stellenbosch University, under the guidance of Dr Adele McLeod of the Department of Plant Pathology, is a continuation of the MSc degree she received from the University of Pretoria in 2006.

Brassica plants were first used to control common scab in Australia. Dr Gouws believes that it can also be successfully incorporated into an integrated and sustainable management programme in South Africa.

“I think a Free State farmer in the 1990s was the first to tell me about how he worked cabbage residue into his potato fields to control common scab,” Dr Gouws explains how she came to know about this biofumigation method.

Some farmers of the Gamtoos Valley, the West Free State and Limpopo already use cabbage for this purpose, while Sandveld potato farmers use mustard plants for erosion control.

Glucosinolates (GLN) are found in the leaves, stems and roots of Brassica crops, and are released when plant parts are chopped up and worked into the ground. The GLN gasses are released into the soil during the biofumigation process and suppress the common scab soil pathogens. It also enhances the levels of “good” soil organisms.

Dr Gouws reiterates that this method should not be seen as a “magic wand” that eradicates soil pathogens entirely.

“You will, however, be able to suppress disease occurrence enough to ensure a higher quality potato harvest,” she said.

Her laboratory studies indicated that mustard plants are the best biofumigation agent against common scab organisms, especially when worked into the soil when plants are 50 % in bloom. Canola residue also works well, but can be important hosts for plant lice on potatoes.

Using cabbage has the added advantage that either its dry or fresh residue can be worked into the soil after a full harvest of this cash crop has been completed.

“Thus, you can initially ‘shock’ the soil with incorporation of mustard plants material and then control the levels of common scab further by adding cabbage residue each year,” recommends Dr Gouws, who compares the method to shock therapy for a green swimming pool.

She believes that this technique is especially valuable for emerging farmers, who are not necessarily able to invest in the start-up costs of chemicals to combat common scab. “Current control methods on the market are in any case precarious,” she explained.

During the course of her PhD study at the Stellenbosch University, Dr Gouws identified and characterised seven bacterial species that cause common scab in South Africa.  Three of these species have never been described before, while three others were reported in South Africa for the first time.

“Thanks to improved molecular techniques it is easier to identify new species complexes worldwide,” she explains.

One of the newly discovered species has been identified in a few South African production areas. It causes fissure scab and causes serious cosmetic damage in tubers.

“The occurrence and possible spread of fissure scab is worrying since it can be found in South Africa on Mondial, a cultivar known to be tolerant to common scab,” Dr Gouws elaborates.