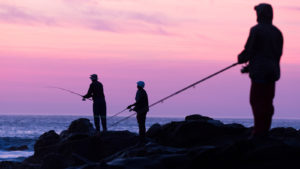 Across South Africa, fishermen rely on their catch to supplement their diets – especially in rural and underdeveloped areas like Mdumbi, in the Eastern Cape, where this photo was taken. Fishermen also benefit from marine protected areas, as photographer Steve Benjamin says, “MPAs are like biological bank accounts and we can all live off the interest they provide.”

With billions of spawning sardines travelling north towards Mozambique, the annual sardine run is one of the planet’s biggest migrations in terms of biomass.

In a report for Call to Earth, CNN reports on the event, which runs along South Africa’s east coast between May and July.

Before the Covid-19 pandemic, the annual sardine run would attract tourists from across the globe. But this year, South African free diving champion Beth Neale was one of the few people who witnessed this phenomenon.

Armed with a GoPro and 360-camera, she swam beneath the fish to film the incredible variety of marine wildlife it attracts. She believes her footage can help people appreciate how the ocean ecosystem depends on seemingly insignificant fish like the sardines.

“I know through seeing the beauty of the sardine run and the underwater world, people start to understand how connected everything is,” says Neale.

However, a recent study in the South African Journal of Science shows changing weather patterns caused by the climate crisis may threaten the sardine run. It also means the sardines are migrating later in the year, which can cause food shortages for animals like the sharks that feed on them alongside the threat of overfishing to shoals around the world.

The sardine run passes through some of South Africa’s Marine Protected Areas (MPAs), where fishing is restricted by law, giving sea life a chance to recover. Prior to 2019, only 0.4% of the country’s ocean territory was protected, but that has recently increased to 5.4% with a target of reaching 10%.

Neale has been diving these waters for years and says she can see a significant difference between the areas that are safeguarded versus those that aren’t.

“The most amazing thing about the ocean is once you implement a marine protected area, you can see the change really, really rapidly,” she says. “You protect what you love… The ocean is what I truly love the most.”