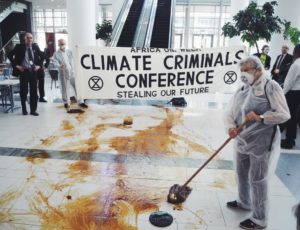 The Africa Oil Week conference at the Cape Town International Convention Centre this week is bringing together governments, investors, international corporations, and lobbyists, who – despite our imminent global ecological crisis – remain unchallenged by our politicians as they further push our world over the edge of collapse through their aggressively escalating production of fossil fuels.

Two of our top government officials, minister of energy, Gwede Mantashe, and premier of Western Cape, Alan Winde, will be welcoming this illustrious crowd, who will “set out the future direction of the continent’s upstream oil and gas sector, secure major deals, forge lucrative new partnerships and take part in bidding rounds held by the largest gathering of African energy ministers”, as the conference website claims. This announcement together with the ticket price of over R100,000 per delegate leaves no doubt that what we are witnessing here is an exclusive sell-out of African oil and gas resources behind closed doors.

The conference organisers have omitted even the faintest reference to climate change in their programme, which is inconceivably irresponsible considering the severity of our ecological situation.

Whilst an elite of policy makers and international corporations plot how best to profit from projects that will be devastating to our planet, hundreds of thousands of people in neighbouring countries like Mozambique are already being displaced by climate-change related disasters and some become refugees in Cape Town.

The United Nations Educational, Scientific and Cultural Organisation (UNESCO) estimates that by 2050, 150 to 200 million people will be displaced due to extreme weather conditions, drought and rising sea levels. The climate emergency also exacerbates conflict through resource scarcity and internal displacement. The South African Human Science Research Council (HSRC) states that developing countries, including South Africa and our southern African neighbours, are disproportionately affected by climate change, due to both geography and low response capacity. 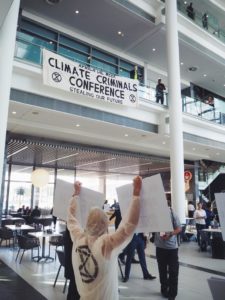 In South Africa’s inland areas, temperatures are projected to increase at twice the global average, according to a special report by the Intergovernmental Panel on Climate Change (IPCC).

Despite these horrific impending realities predicted by reputable, independent and scientifically-backed organisations, South Africa continues to invest in dirty energy like coal, oil and gas, leaving no hope that our country will reduce our carbon footprint, which is amongst the highest in the world, in the short time-frame climate science warn we have left to prevent catastrophy.

In our global fight to avert a climate catastrophe, Extinction Rebellion (ER) demands from our elected politicians, honourable Minister Gwede Mantashe and Premier Alan Winde, to make an open statement at the Africa Oil Week declaring a climate emergency and withdrawing any support to climate criminals who are complicit in the demise of our planet. 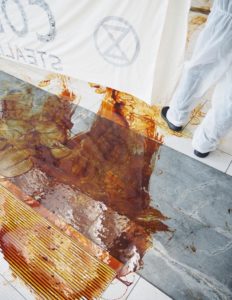 Further, ER demand from the government of Western Cape and of South Africa:

Following the protest on Tuesday 5 November, ER continues to oppose Africa Oil Week being held at the Cape Town International Convention Centre. This conference brings together international corporations, governments, investors and lobbyists, who – despite the global ecological crisis – continue to value profit over both people and the planet. The delegates who attend this conference are climate criminals.

While they make billion-dollar deals, they do not care about global warming caused by their industry, or the floods, droughts, typhoons, pollution, crop failures, refugees and misery that result. The Minister of Energy and Mineral Resources, Hon. Gwede Mantashe, and the premier of the Western Cape, Mr Alan Winde, have welcomed the delegates to Cape Town. 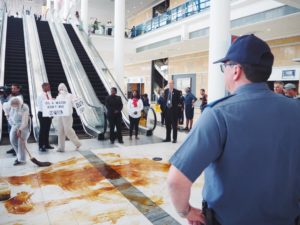 These climate criminals are not welcome here!

As neither Hon. Mantashe nor Mr Winde have adequately responded to the letter of demand we sent earlier this week, they will take action again against Africa Oil Week.

Extinction Rebellion will hold another non-violent protest at 12.00 noon on Friday 8 November 2019 at the CTICC 2.

They are calling all South Africans who value the future of the Earth and the wellbeing of their children and grandchildren to join in rebellion against the destruction of our planet.