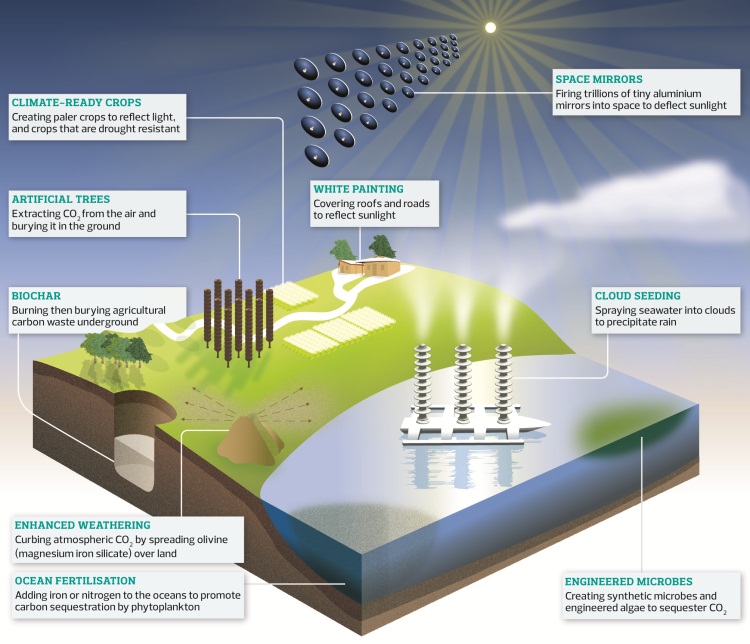 An infographic showing the methods by which geoengineering hopes to combat climate change,

As political apathy and inaction on climate change dims hopes of reducing greenhouse gas emissions, scientists are increasing exploring plan B – engineering the climate to avoid the worst of what is predicted to come if emissions can’t be curtailed.

A Royal Society of London paper put the issue squarely in the spotlight in 2009 when it issued an influential paper that suggested we need to take geoengineering seriously.

Some of those recommendations have sunk without trace and there has been laughable progress on others (50% reduction on 1990 levels by 2050 is looking increasingly unrealistic).

The irony is that the later we leave action on climate change mitigation, the quicker our hand will be forced on geoengineering schemes. As some New Zealand research featured in Nature Climate Change this week suggests, the public is wary of any efforts to engineer the climate, meaning legislative and funding measures to allow it to happen will not be popular.

The researchers conducted an online survey with 2,000 people across New Zealand and Australia and undertook 30 in-depth interviews. Lead author, Professor Malcolm Wright, deputy Pro Vice-Chancellor of Massey’s College of Business, said the interviewers drew on commercial methods used to evaluate perception of brands and new products to see what the public’s perception of various proposed climate engineering schemes was.

“The results show that the public has strong negative views towards climate engineering,” said Professor Wright. “Where there are positive reactions, they favour approaches that reduce carbon dioxide over those that reflected sunlight.”

So solar sails are out and biochar and carbon capture and storage are in.

“It is a striking result and a very clear pattern. Interventions such as putting mirrors in space or fine particles into the stratosphere are not well received. More natural processes of cloud brightening or enhanced weathering are less likely to raise objections, but the public react best to creating biochar or capturing carbon directly from the air.”

The results are hardly surprising – and mirror other surveys conducted around the world. But are we willing to do anything not to avoid the wackier geoengineering schemes having to be seriously considered in the next few decades?

That’s a different question and would perhaps make for an illuminating survey.