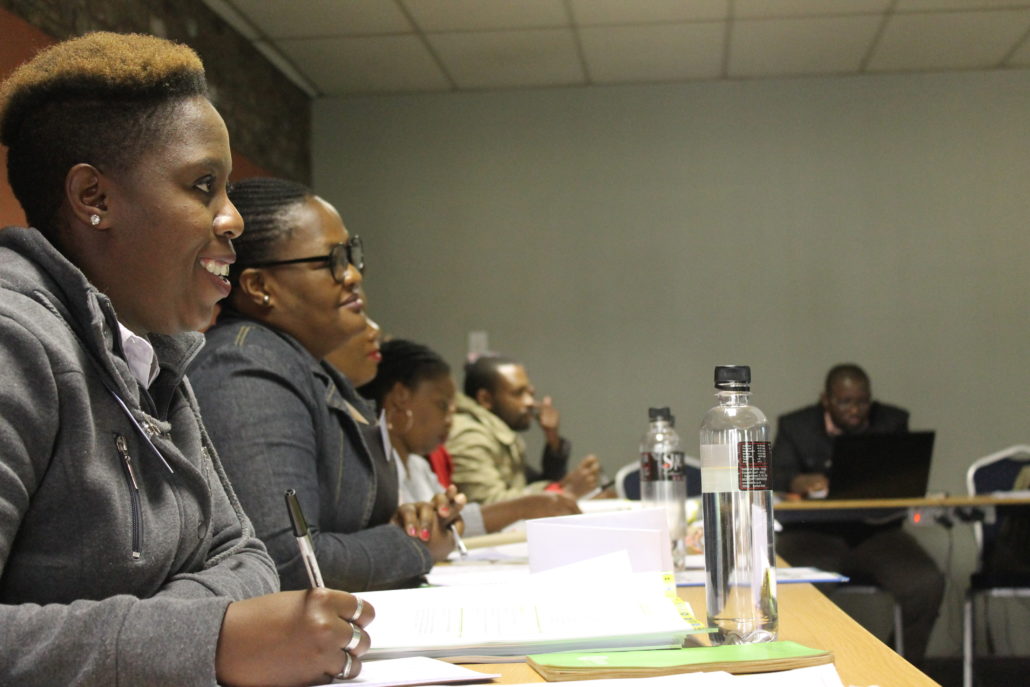 “I think we understand why we are all here,” said Janet Munakamwe, Action 24 workshop facilitator, as she held a copy of the Constitution of South Africa in the air.

“The key is in the preamble of the Constitution – the first three words are ‘We, the people’,” replied Bongani Dlamini, from Youth@SAIIA. These were the opening remarks of the Action 24 workshop in Gauteng, one of three events happening last week across the country.

Public participation is entrenched in the Constitution as a crucial element of democracy. Yet many people lack a clear understanding of the principles and mechanisms through which the public is entitled – and encouraged – to take part in making decisions that directly affect them. This is especially true of the workings of the Legislature at national and provincial levels.

The workshops organised in Gauteng, Limpopo and KwaZulu-Natal as part of the Action 24 initiative, addressed just that. Invited by the African Climate Reality Project, Food & Trees for Africa, Ekurhuleni Environmental Organisation and South Durban Community Environmental Alliance, over 60 local civil society organisation representatives and local media professionals from these three provinces gathered to explore how to mobilise communities to engage their provincial Legislature and National Parliament to foster progressive and ambitious environmental legislation and to oversee government action in that sector.

“These workshops are about activating citizens to take part in the decisions”, highlighted Elvis Hloriso Komane, representative of the Council of Land Informal Residence and Family Development of Southern Africa (CULISA) based in Burgersfort, Limpopo. 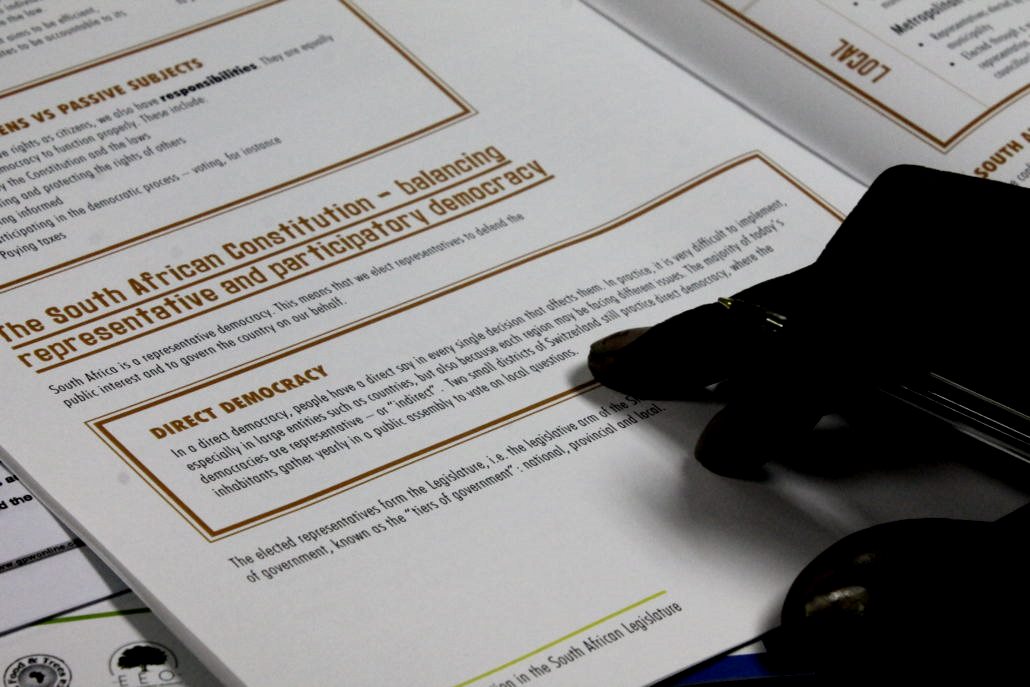 Action 24 – Active citizens for responsive legislatures’ is a project co-funded by the European Union that promotes broader and more effective public participation in environmental governance. To do so, citizens need to understand how South Africa’s representative and participatory democracy works, and their right and responsibility to engage with the legislatures that represent them.

“All we’ve seen in the past is people striking to enforce laws”, said Keneilwe Mmushi from Kruger to Canyons (K2C) Biosphere Reserve in Hoedspruit, Limpopo. “Public participation in the legislature is another meaningful way of dealing with environmental issues. It enables community members to raise social and environmental issues with their government at local, provincial and national levels. This is a way to get into the system and influence the decision-making process.”

Section 24 of the Constitution protects our right to an environment that is not harmful to our health or well-being and to have the environment protected, for present and future generations. In South Africa however, the pressures to deliver basic services and enhance development opportunities often come into conflict with environmental custodianship and the urgent need to develop sustainably. 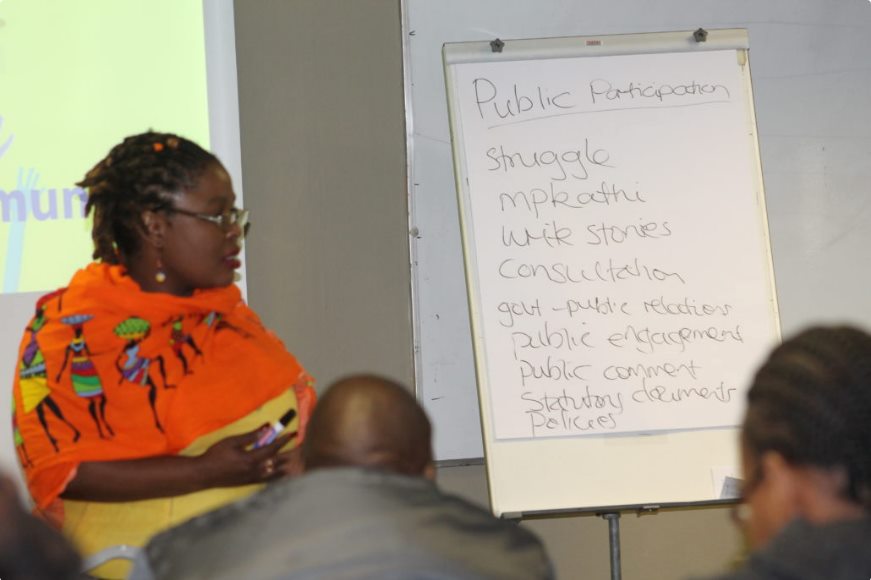 The topics covered in the workshops included the law-making and oversight processes, lodging submissions and petitions, reading and understanding a governmental budget, the role of the media in making information available to the public, and key environmental legislation and policies at national and provincial levels.

“In the past I have been invited to Cape Town to take part in activities on the fiscal framework – but I didn’t engage then because I didn’t understand how the budget works. I’m thankful for the workshop: it’s empowered me to better understand the budget and the planning process”, said Mmathaphelo Thobejane from the Sekhukhune Environmental Justice Network in Limpopo.

Each of these topics was explored in relation to the participants’ experience and the issues faced by their communities. “We have abundant mine dams in our area that have caused a problem of sinkholes. The hospital has already been shut down because of it and houses are falling apart. We don’t know how it’s going to spread,” said Noluthando Lebaka, Action 24 workshop participant representing Invelo Future Earth Watchers in Gauteng. 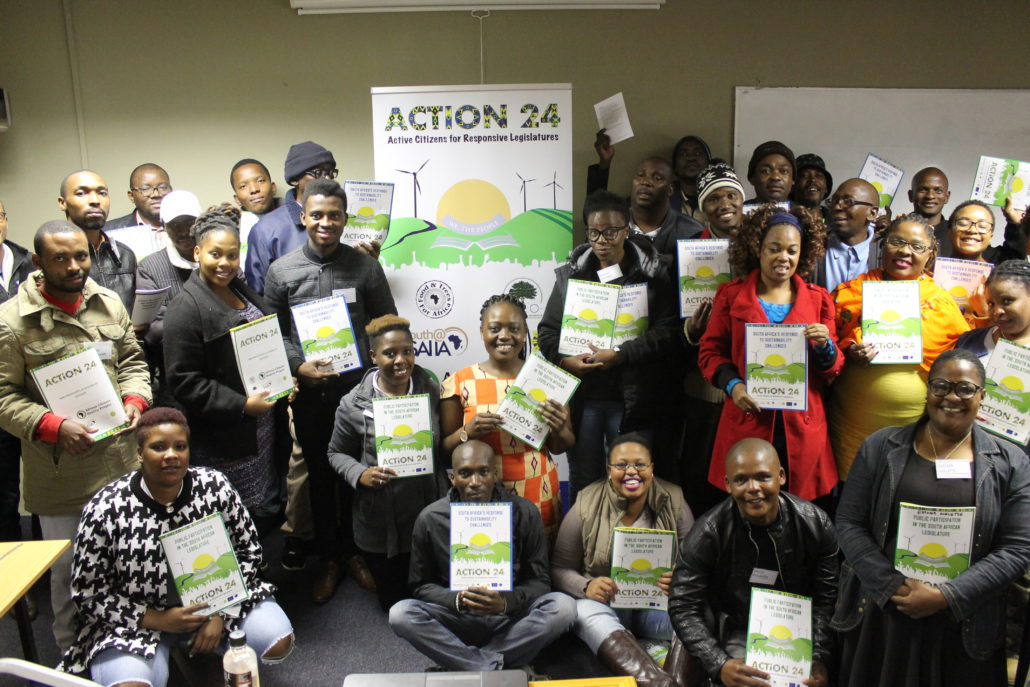 In Limpopo, the main challenges identified by the participants concerned the environmental and social consequences of mining, pollution of the air, soil and water, and the felt impacts of climate change such as drought. While establishing clear linkages between the protection of the environment and community upliftment, the participants also stressed that for many communities that live near mines and polluting industries, having to choose between environmental protection and jobs will remain a hard-felt reality so long as government doesn’t take rapid and concrete steps to enforce existing regulations, and organise a just transition to a low-carbon and sustainable economic model. “When it comes to climate change, we citizens must monitor and call on the authorities to ensure that the response strategies that have been developed by national and provincial governments do not just remain on paper, but translate into actual interventions”, urged Noelle Garcin, Action 24 Project Manager.

“I feel that when there is opportunity for public participation it normally is not done properly,” deplored Lebaka, “The consultation process is not fair for our communities. This workshop is mind-opening because now we understand the Legislature and its processes very clearly and know what needs to be done.”

During the workshops, the participants were invited to identify actions they could take with the Legislature to address some of the environmental and social issues their communities are facing. They also started reviewing the recently released Climate Change Bill, which is open for public comment until 8 August 2018. 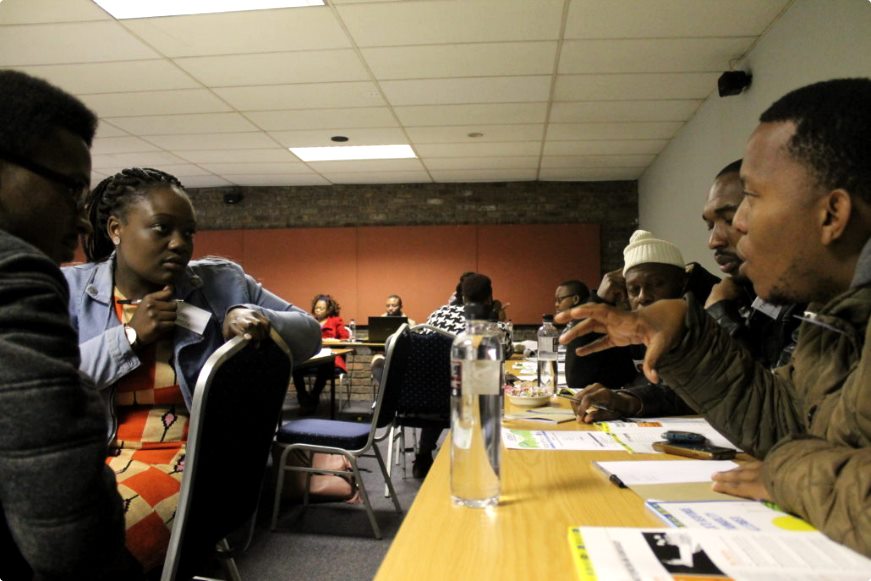 “On Friday 15 June we participated in a KZN provincial consultation on the draft Climate Change Bill, but we weren’t given enough time to engage on it before the government’s consultation process,” said Phiwayinkosi Mungwe, workshop participant from the South African Youth Climate Change Coalition. “We need to regroup and look through each and every clause so that we can make our informed amendments, and to do that we need to involve young people and whole communities who are and will be affected by climate change.”

The Action 24 partners will work with the organisations and media represented at the workshop to support their engagement in the legislative oversight process and encourage inputs on the climate change legislation.

“I was maybe ignorant before, but now everyone is in charge of their responsibility for their community. We must not expect our leaders to give us everything. We must be involved in the legislative processes so that we can know what is going on here [in Gauteng] and in South Africa as a whole,” said Esther Meletse, workshop participant and Passover Community Building Organisation representative. “I think after this workshop I am going to be a leader myself.”