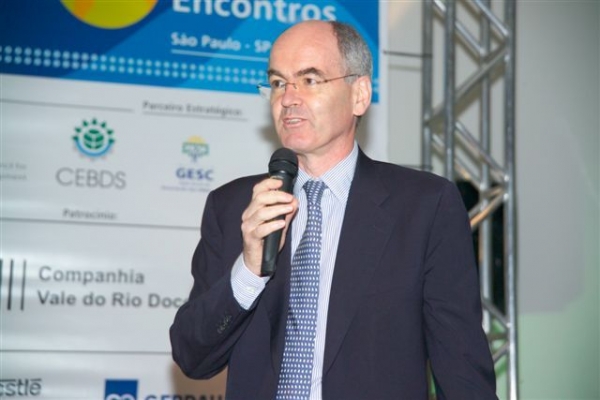 Imagine opening a newspaper and reading that across the world, fish stocks are recovering, that forests are growing back, that droughts and extreme weather events are declining, that carbon dioxide levels in the atmosphere are dropping, that oceanic dead zones are regenerating and that threatened species are bouncing back. That’s what John Elkington (pictured) describes when asked to imagine what real progress on sustainability would look like. Until that moment arrives, collective efforts for sustainability remain dangerously inadequate.

Sustainability and corporate responsibility pioneer, and author of 18 books, Elkington visited Cape Town recently as a guest of the Cambridge Programme for Sustainability Leadership (CPSL), to speak on the 5Ps – Population, Pandemics, Pollution, Proliferation (of weapons), Poverty – and to introduce his latest volume, The Zeronauts.

Elkington is founder of Environmental Data Services, SustainAbility and Volans. He serves on numerous (“too many”) advisory boards, including Nestlé and various venture capital funders. He first coined the term ‘the triple bottom line’ in the mid-1990s, which he later popularised as ‘people, planet and profit.’

“We’re in one of those moments that have been building for decades. As a species, we’re starting to push up against some very fundamental constraints in our planetary environment,” he told an audience at UCT’s Graduate School of Business. We now face the challenge of ‘breaking the sustainability barrier’, just as aeronautic pioneers had to fight disbelief and aerodynamics to break the sound barrier in the 1940s. “People in leadership positions find all this profoundly disorienting,” he said, pointing out that fundamental change can be immensely challenging, even ‘nauseating’ for those who have to experience it.

“We’re seeing social and economic breakdown in the Eurozone, environmental breakdown in oceanic fisheries – an absolute screaming catastrophe,” he said. But most of our responses are ‘change as usual’.

The problem is that despite a great wave of sustainability awareness over the last decade, meaningful action remains terribly inadequate. “I have a growing sense of dissatisfaction with the corporate social responsibility agenda as it currently is,” said Elkington. Far bolder action is required.

He points out a 2010 poll of 766 CEOs conducted by Accenture in which 93% of respondents said they consider sustainability to be vitally important – which might appear to be encouraging, until you consider that 81% of the same CEOs said they’ve already embedded sustainability in their operations. Since it’s all too clear that sustainability is nowhere near being so ubiquitous, the finding suggests that CEOs are either incredibly cynical or deeply ignorant of what real sustainability would actually mean.

Words are not enough

“Business leaders use the language of sustainability, even when they don’t have a clue what they’re talking about,” said Elkington.

Elkington repeats the analysis of former head of Friends of the Earth, Tom Burke, who suggested that in moving towards deep sustainability, we face three significant obstacles: economics, politics and culture.

“Economists as they are currently trained are a very big part of the problem.”

Politics is all too often geared towards the superficial (‘clicktivism’ being the latest manifestation) and the short-term. And our culture is overly driven towards consumption, encouraged by advertising.

“The promotion of consumerist lifestyles is pernicious. My parents are in their 90s now, and the happiest time of their lives was during World War II when things were stripped to necessities,” he said.

Things are changing. Elkington finds himself far more welcome in boardrooms than he was during the 70s and 80s.

“We’ve moved from denial through compliance to CSR, and the next step is innovation.”

But they’re not changing fast enough. Real breakthrough sustainability is the goal of what Elkington calls the ‘Zeronauts,’ pioneers who are pushing the 5Ps down to zero.

One of his Zeronauts is Jochen Zeitz, CEO of Puma, which is one of the first companies to report environmental profit and loss accounts. In 2011, the first year they did this, their net environmental costs were 145m euros – effectively cancelling half their profits. Another is Ban Ki-moon, UN secretary general, who recently claimed that the current model of economic growth and development is a ‘global suicide pact.’

Another set of Zeronauts is a large group of major footwear companies: Adidas, C&A, H&M, Li-Ning, Nike and again, Puma. Originally challenged by Greenpeace to compete against each other to be more environmentally friendly, they realised they had little individual leverage with their Chinese suppliers. Following a dialogue facilitated by SustainAbility and Volans, they ended up agreeing on a roadmap to zero discharge of toxic chemicals by 2030.

“Recyclebank in New York is encouraging and incentivising and creating social networks around doing the right thing,” said Elkington.

Recyclebank, which doubled its revenue in 2011, was recently listed by Fast Company as one of the world’s 50 most innovative companies. It rewards people with for taking everyday green actions (recycling, cutting down on water usage) with discounts and deals from thousands of businesses.

Governments have failed to take sufficiently strong action on climate change in particular, and on sustainability in general. Elkington refers to Rio+20 as ‘catastrophically bad.’

He has not given up on governments, though, but points to research showing that globally, close to 50% of listed capital is controlled by just 1000 corporations. So it’s vital to reach those business leaders.

“We need to get business away from resisting change to the point where it actively welcomes new forms of regulation. The challenge is getting into those boards and ‘C-suites’ (CEOs, CFOs, CTOs, etc.) and changing how decisions are made in those environments,” he said.

“Capitalism as we know it – economics and accounting – are stuck in the 19th century.”

But CEOs alone absolutely aren’t going to change the world.

“We need to get this onto the maps of chief financial officers.”

This suggestion is an interesting echo of a call that is now sometimes heard in climate change circles, for that issue to be moved out of environmental ministries and into treasuries.

On the other hand:

“There is a very different generation of business leaders popping up in Europe, such as Richard Branson. He has set up really interesting initiatives: the Carbon War Room, the Elders, the Gigaton Awards, and the B Team; of business leaders working as private citizens to find solutions.”

The fight against corruption is also vital. Britain, Elkington tells us, was the most corrupt country in the world before anti-slavery hero William Wilberforce helped set up a network of organisations that helped to fight corruption.

Often, even when CEOs do ‘get it’, there remain immense challenges in getting that insight to filter throughout the whole organisation.

“I’ve always envied James Bond,” he said. “Bond always knows exactly what button to press in a crisis. I just try to press every button in sight.”