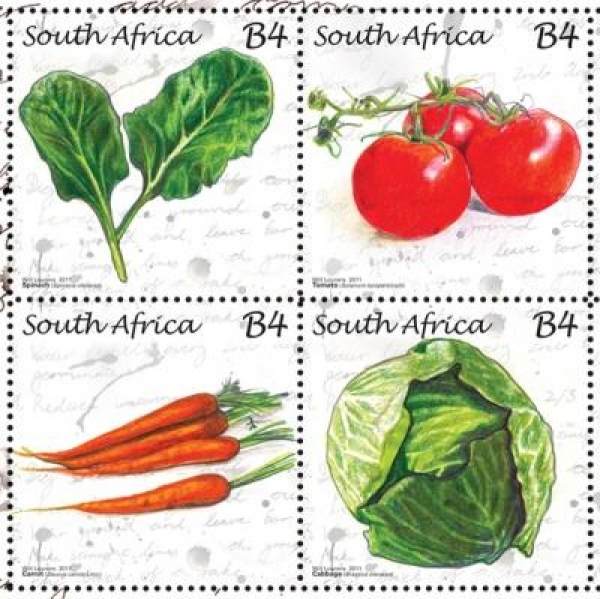 Together with a set of stamps on 12 August 2011 celebrating six kinds of nutritious, easy-to-grow vegetables, the SA Post Office will issue a free recipe booklet containing recipes that feature each of the vegetables as the main ingredient. Customers who buy six or more stamps will receive the recipe booklet.

The Philatelic division of the Post Office is confident that the recipes are foolproof.

‘We had great fun testing the recipes,’ said Johan van Wyk of the SA Post Office.

‘We included favourite family recipes from our staff members and we love the thought of sharing them with all of South Africa.’

The stamps, illustrated by Will Lourens, a student from the Open Window School of Visual Communication, feature spinach, beetroot, tomatoes, carrots, cabbage and butternuts.

Lourens says he used colour pencils for his illustrations, a medium he chose because it is natural and down-to-earth. The background consists of water-splattered instructions for growing vegetables and the stamps were done in the style of botanical illustrations.

‘The drops are meant to remind you the vegetables need watering,’ he says.

The stamps cost R5,00 each or R30,00 for a set of six, which will include the recipe booklet. They can be used as postage on an A4 sized envelope.