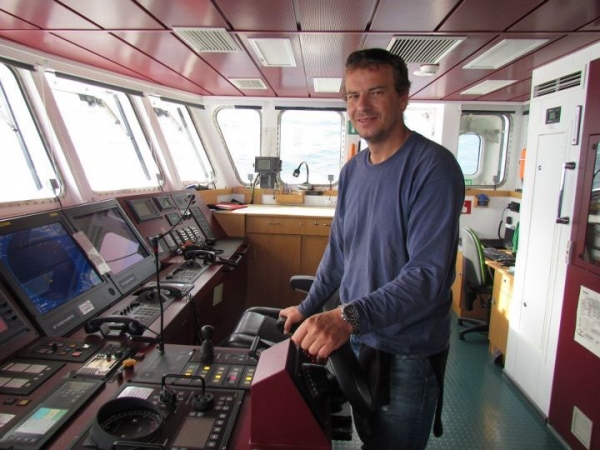 Robert is fun to have around the mess – always smiling and joking in his heavily accented but good English. It’s a game for me to try and guess where people are from. There are 14 nationalities on-board. People grew up in countries far apart from each other, in totally different cultures and with completely diverse types of educations or skills.

What brings them all together on this green ship, the Rainbow Warrior?

Such an apt name for a multi-cultural vessel out to protect the earth’s resources and species. 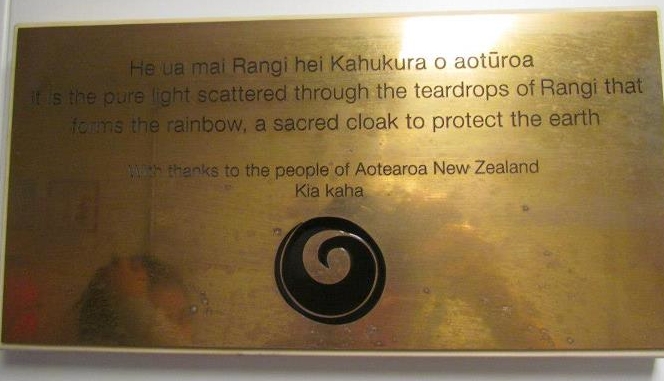 Piloting boats and planes that help

Early morning I join Robert on the bridge where he is on shift. Suddenly he clams up. “I don’t like to talk to the press,” he says. I explain that we only write for the earth and so for me news is what benefits earth. We make the green connection, the ice melts and we chat like old friends.

Robert left the Czech Republic at 17 as a member of the air force. So as a trained pilot he went to Spain, flew some planes and got into navigating ships. Now he alternates these two jobs.

Previously he worked for a coal carrier which was delayed by Greenpeace guys who climbed on-board and erected their banner. “I didn’t care – it gave us more time in port.”

Did that make you think about why they were doing this?

“No, I wasn’t thinking yet at the time. I was just happy for the delay.”

During the time of the Exxon Valdez oil spill he was working on an oil tanker. “That was when I decided to join Greenpeace. It was time to think about where I put my energy,” he says with a smile. I see the light of passion arrive in his eyes. “If I am going to stay in shipping it would have to be shipping with a good purpose, I said to myself. Also, I like to be able to go onto land and meet the local people. There is a huge difference between simply sailing in and out of ports and actually going out and talking to the people.”

An oil tanker glides past

For the past 18 months he has worked on and off for Greenpeace. Next he is hoping to fly planes into the Congo with medication and emergency supplies. Yes, I feel the connection. This man is now working from the heart. Work-with-a-purpose has brought his head and heart into alignment.

Is that why there is always a smile on his face? Is this a contagious condition here on-board?

Bucking the waves into dreamland

Is this also how we make sense of the rough nights here? This morning at coffee we have animated discussions about how we survived the jumping and bucking ship last night. Two laptops crashed off tables – I hope they’re ok. I climbed down the ladder when the sways became too rough and rescued mine just in time.

There are new tricks to learn. Firstly, staying in your cot when you’re swinging in the waves is an art in itself. Especially if you’re sleeping in the top bunk, like myself. Sleeping whilst holding onto the rail in the hope of barring yourself from flying over is not a good remedy for sound sleep. Eventually I figured out I could wedge my one arm in between the matrass and the wall as a type of anchor, then I could relax a bit.

This morning we hear there’s a way in which you can raise the open side of your cot a bit so that you’re less likely to fall out. As this is still a new ship, this is one of the dangers on the list of things to fix. Safety rails for the top bunks will be made.

Secondly, descending via the ladder in the dark. I discovered it’s much higher than I had anticipated, so I usually fall the last bit. Now I hear you should put your one foot on the table in the centre of the cabin. “Only a yogi can get up and down there with the ladder only, “ says Brett. Now I am quite proud of myself.

The old sailors laugh at us plebs learning the ways through experience, before offering some tips. The mood is light and there is a thread that holds us together.

So we are truly on a journey of discovery. How to survive, how to cope with the swinging nausea, how to stop wrecking this planet. Brother Malvern from Johannesburg has been ill the entire journey. This morning he declared himself officially “allergic to ships.” There must be a word for it – something else to learn.

Lemon is the mother of cures

I shared my lemon cure discovered in desperation during morning sickness with one of my brood. Now when you see someone biting into a lemon, you know what’s wrong. In fact, I need to go and find one myself. More stories later.