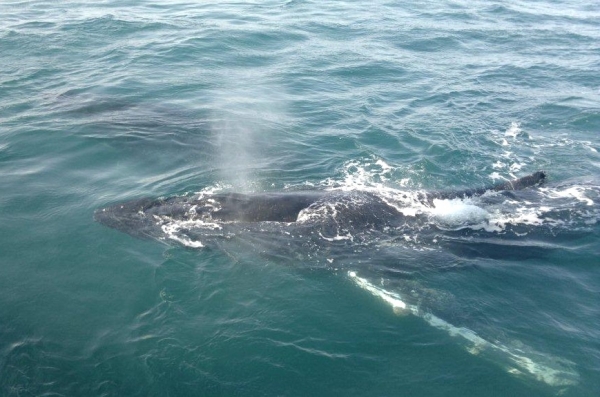 NOTHING swayed the punctual running of the Rainbow Warrior, except one of two events  …the arrival of either dolphins or whales. These supreme guardians of the sea that wraps herself around our planet draw all on board to the rails and peering into the distance.

And there they were – a whole pod of whales. Here a fin, there a tail. Southern Right Whales. Then they were gone. Oh dear, is that all? Will we see more? Someone looked in the other direction. Captain Pete switched off all engines.

The game of hide and seek

There! And we all rushed to starboard. But down they went. We wait …more? Bow, shouted someone and we ran. This was how the game started. Like automatons, all 25 of us crew (minus the Captain, who observed from the bridge) charged to the best viewing point and ‘wow’ came the universal sound of admiration – ‘look at that!’ As soon as they were spotted, they were gone again. Were they playing hide and seek with us?

We had clearly sailed right into a large family of whales and they were sussing us out.

“I’m sure they can feel the excitement radiated from this deck each time they peep out somewhere,” I said. They clearly enjoyed the game, and circled closer and closer around us. 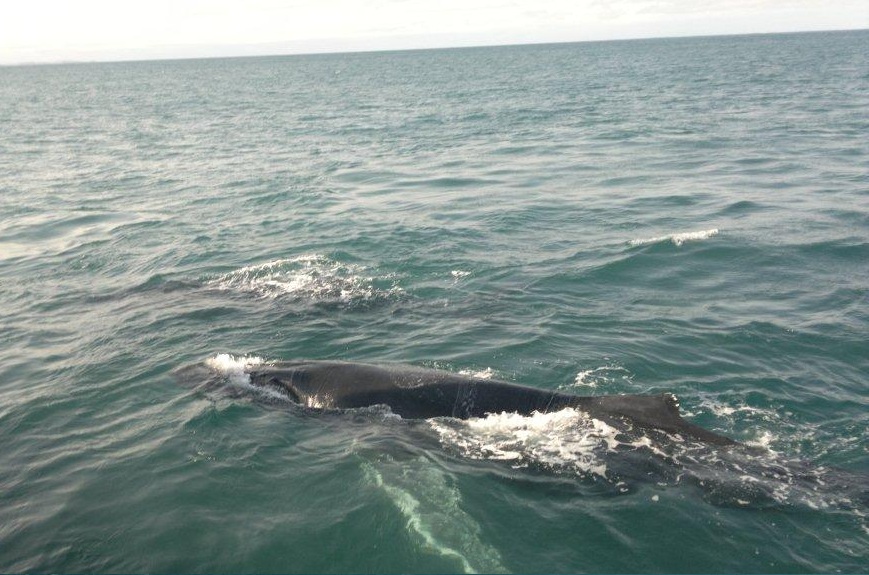 Then something unbelievable happened. A few big elders swam right up to the boat and stayed. So here we were in shocked silence drifting together. Their noses a meter away from the boat … we were mesmerised. Cameras clicked. I had given up shooting some time ago – the moment was too sacred. I wanted to absorb it with every cell. I hardly breathed.

Then they ducked down and appeared on the other side, floating and smiling, facing us …they looked at us, while we looked at them. Rubbing their big bodies against the boat, we felt a few bumps. “OK, they’re coming to sink us,” someone joked.

‘Those bumps on their faces are their hair follicles,’ said the captain. That’s how close we were – we could see the hair on their faces. Some of us bent over the rails to reach out. Gnarled fins testified to rough lives at sea. We were now in whale time. They simply stayed. We stared and marvelled at each other, listening to their breathing …wiping the mist off our faces and cameras. 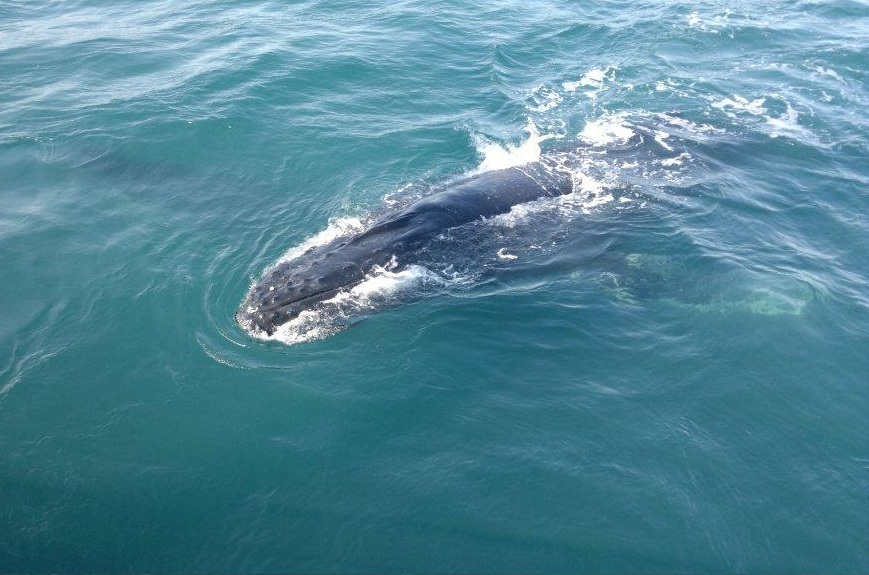 What were they trying to say? We were moved and the frequencies were clear. I felt respect and encouragement beaming at us. They knew the purpose of this ship and the intentions of all aboard. It was about the protection of the ocean – their main concern. They enjoyed our vibes, there was no doubt. And they had come to pay their respects to the selfless crew on board. This was a salute to the Rainbow Warrior.

I felt proud of this worthy reception of this iconic ship to the South African waters.

After a full hour two speedboats charged towards us and chased away our friends. Everyone returned to their jobs and we sailed on, honoured and humbled by this exceptional visit.

Whales are rare visitors at sea

I returned to my interview with Paulo from Argentina.

‘Is this a normal thing to happen to the Rainbow Warrior?’ I asked. ‘No,’ he said. ‘I have only seen whales once – when I joined in 2009 and worked on the Arctic Sunrise in the Pacific.’ (Nazareth from Italy later confirmed that in five years at sea he had never seen whales.)

When the Arctic Sunrise arrived at Buenos Aires, Paulus joined the action team and they blocked a ship and the entrance to the port. This ship was transporting a boiler intended for a mining facility to be built in his country. They were going to use coal to produce energy. 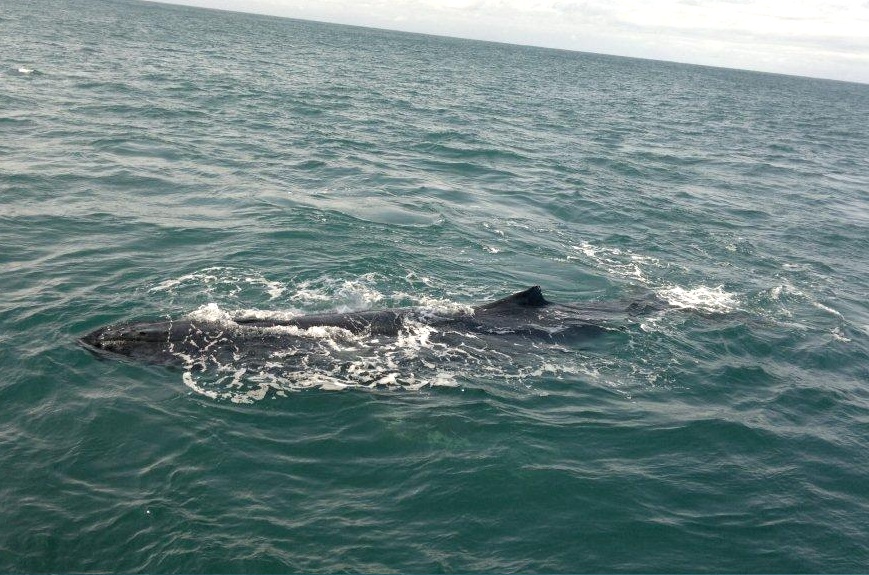 This was your first action. How did it feel and did it actually work?

‘The adrenaline rush in my body was pretty special. We spent ten hours at that blockade. When you notice that you are making a difference, it is pretty special. Usually the kind of changes we are after is not one we see from one day to the next. Sometimes we are just asking someone to stop doing something, like polluting the environment. Maybe after carrying out the action you might see immediate changes, but they usually take more time.’

So your aim is to draw attention to a specific issue?

‘We simply start telling the public what is wrong at that location, but then we have to wait and see whether it has worked. Campaigns always take time. First we lobby the issue – we tell the people polluting or destroying the environment what they are doing wrong. After that, if they don’t stop, then we go on and carry out the action. Or we might do a demonstration instead. But it is all planned to communicate a story to the people, our supporters and the media.’

Governments and companies have the most power

‘We also put pressure on governments. Our main targets are governments and companies, as they have the most power to stop whatever is destructive. Sometimes we need a new law. For example, in Argentina we need to stop deforestation. So we might start targeting the company that is cutting the trees down, but after a while we might go for the government, as they have the most power. We have managed to encourage many laws that are required to protect the environment.’

I am always keen to understand what draws people into the earth’s calling in the first place. What motivated him right in the beginning? Why was he open to serving nature?

‘As a child I was interested in environmental problems. I knew about solar, wind, geothermal energy – and the dangers of atomic energy. I always liked the oceans and different life forms that are in the sea, but I wasn’t sure how to get involved and what to do. Until Greenpeace arrived at my city, then I knew. I had to look after nature.’ 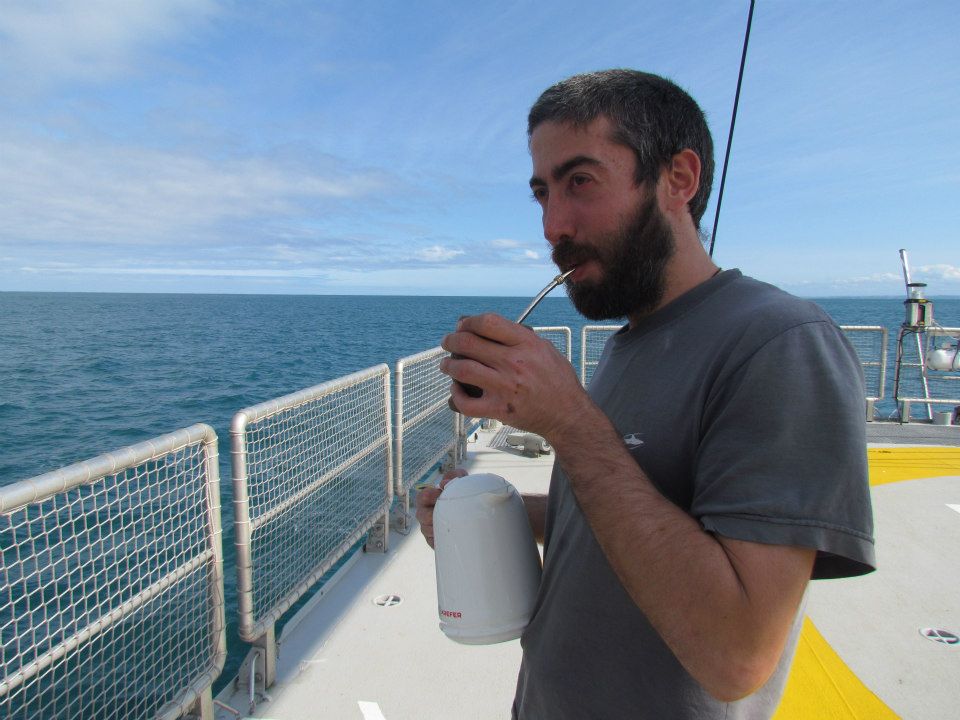 Grandparents grew their own food

‘In our city near Buonos Aires there are lots of trees and birds, and my parents and grandparents made good use of the ground. They grew their own food and fruit trees. Watching all of them applying this farming and animal knowledge – they also had poultry and animals to eat and plants that fed us – showed me to respect nature. This was in Harmingham, which was created by an Irish immigrant. My grandparents lived in a little house at the edge of an open field, where they grew everything we needed. My parents and I lived on the second story and my grandparents at the bottom.

I watched them and learned to appreciate where the food comes from.’

Apply your brains to create a good future

What is Paulo’s message to our readers?

‘I know about the problems in Africa, about the overfishing of your oceans. And the coal and nuclear that’s used as sources of energy. We need to help by applying our brains to ensure energy is produced through renewable sources.

If every human in the world had to apply his own brain in order to do something for someone else and for nature, this would be a much better world. A world we can actually live in. We need to inspire those in the environmental movement, but also all the others to use their brains for a good purpose. Not to think only of themselves, but of something bigger than their own needs.’

Special thanks to Dian, for sharing his lovely whale photos and video clips with us.