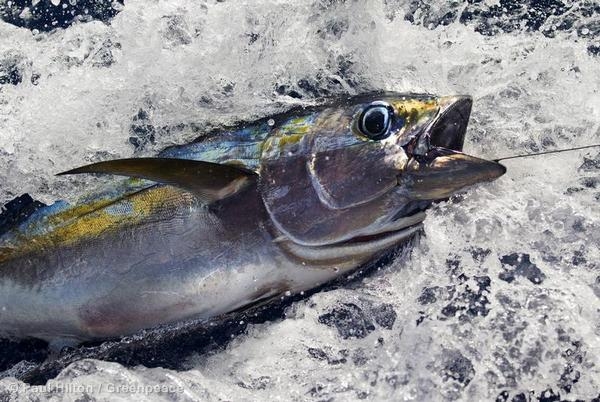 Greenpeace held talks with the Mauritian government and key stakeholders about sustainable tuna fisheries this past weekend following the arrival of the Rainbow Warrior in Port Louis.

The Rainbow Warrior has been patrolling the southwest Indian Ocean for the past five weeks. As part of its visit to the region, Greenpeace is seeking dialogue with Mauritian communities, government officials and different sectors of the fishing industry to address the problems of overfishing.

Indian Ocean tuna populations are currently under great pressure from overfishing as a result of poorly regulated, wasteful fishing methods and illegal fishing.

“We are here in the Indian Ocean to listen to communities, learn about fishing practices and build alliances so that the Indian Ocean region can continue to provide fish and fishing jobs for future generations,” said Sari Tolvanen, expedition leader on board the Rainbow Warrior.

“Illegal and unsustainable fishing only puts the region’s economic prosperity and food security at risk. We aim to work with the Mauritian people to take ownership of their ocean resources.

“We have invited several representatives from the Mauritian government and the Fisheries Ministry to join us in a discussion on board the Rainbow Warrior with the aim of finding ways to build sustainable tuna fisheries. We are hugely excited about discussing these issues with them.”

Greenpeace is in Port Louis, a major hub port for the region’s tuna fishing fleet, for three days. The talks will focus on the action needed from governments and industry to ensure legal, sustainable, and equitable tuna fisheries – crucial for the creation of fishing jobs.

The fishing activities observed by the Greenpeace team in recent weeks were taking place in fisheries targeting the already over-exploited albacore tuna, as well as bigeye and yellowfin tuna, swordfish, and sharks caught for the lucrative fin trade.

After leaving Port Louis, the international team on the Rainbow Warrior will continue its mission in the Indian Ocean. The aim of the expedition is to highlight the problems associated with excessive tuna fishing, unsustainable fishing practices and the need for countries to cooperate and ensure that communities will benefit from the wealth coming from the oceans in the future.

Greenpeace is campaigning for responsible fishery management to end overfishing and to support a global network of marine reserves covering 40% of the world’s oceans. Both are necessary steps to restoring our oceans to health and to maintain living oceans and ample fish for future generations.

A yellowfin tuna is pulled along side the Spanish longliner Herdusa no1 Vigo, South West Indian Ocean. Greenpeace is observing fishing activities in the Indian Ocean where poor management has left many stocks over exploited. © Paul Hilton / Greenpeace