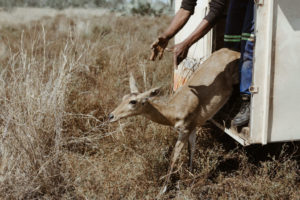 In a large translocation operation recently concluded, 388 animals were moved from Mozambique’s Gorongosa National Park to Maputo Special Reserve and Zinave National Park. Zinave received 47 reedbuck and 48 sable – the first sable to return to the park in decades. In Maputo Special Reserve 247 waterbuck and 46 oribi were added to the reserve’s wildlife family. There had not been oribi in the area for the longest time, and they were received back into the ecosystem with much celebration.

Gorongosa’s story is a perfect example of the powerful role that rewilding plays in the restoration of landscapes. Declared a national park in 1960, Gorongosa had suffered many setbacks over the years, losing most of its wildlife to the protracted civil war.

Pedro Muagura, Park Warden of Gorongosa, says, “I remember the times after the civil war when I brought wildlife and forestry students here, it was difficult to see a single animal in the many days and weeks we camped in the Park.”

The Government of Mozambique, with support through public-private partnerships, focused on restoring the park. A large-scale rewilding project was undertaken with hundreds of animals moved into a wildlife sanctuary that gave them the space and safety they needed to grow in numbers. Less than ten years later, an aerial survey revealed that wildlife numbers in the park had risen dramatically and lions were photographed for the first time in nearly 50 years. Three years later another survey showed that wildlife numbers had risen with an additional 40%. By 2018 it was described by some of the world’s leading scientists as one of the most biodiverse places on earth, home to a range of endemic species with a thriving ecosystem. This year, the park was honoured with an inclusion into Time’s Top 100 Places to Visit.

Gorongosa has been supporting the rewilding efforts of parks within Mozambique’s transfrontier conservation areas since 2016, with various grazers and even warthog being generously provided. 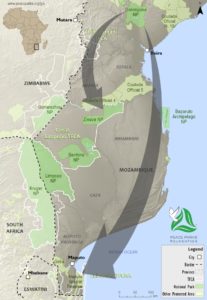 Working in Zinave National Park, Bernard van Lente, Peace Parks Foundation’s Project Manager, says, “Zinave is situated in a sub-tropical area with high rainfall, which means that the grass here grows very well. Historically, this supported the large numbers of bulk grazers that lived here. Due to the absence of these animals for many years following the civil war, the grass repeatedly grew and collapsed without the natural recycling of plant materials needed to keep the ecosystem healthy.”

As part of its role in co-managing the development of Zinave, Peace Parks Foundation works closely with Mozambique’s National Administration of Conservation Areas (ANAC) to reintroduce a range of grazers and restore balance to Zinave’s natural systems. “Each animal we bring in plays a different role in restoring the park,” says Bernard. “Sable, for example, tend to prefer tall grass, whereas reedbuck favour more open grassland and wetland-type areas.”

Restoring a conservation area’s ecosystem is one of the key components to rebuilding a national park, alongside other factors, such as infrastructure and tourism development to ensure long-term sustainability. “Sable is a signature species and is highly sought after for game viewing, so bringing them in will also increase Zinave’s attractiveness to eco-tourists,” says Bernard. 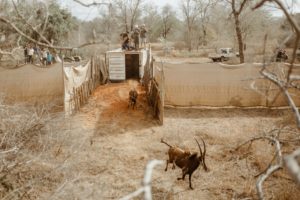 Maputo Special Reserve, which lies in the very south of the country, is fast becoming one of the country’s top tourism destinations. It lies close enough to the capital for easy access, yet far enough to offer visitors a true wilderness experience, with the added advantage of a pristine coastline, home to nesting turtles, dugongs, dolphins and whales.

“Our rewilding efforts here have been tremendously successful,” says Brian Neubert, Peace Parks Foundation Project Manager in Maputo Special Reserve. “With the support of various government and private organisations, we have brought in a great variety of animals over the last few years. Tourists who visit the reserve are almost guaranteed to see elephant, giraffe, reedbuck or zebra in high numbers. The recent introduction of Gorongosa’s oribi will further improve the diversity on offer.

Historically, oribi was a naturally occurring animal in Maputo Special Reserve and reintroducing the species to the park will restore their presence and allow them to take up their role in the ecosystem. 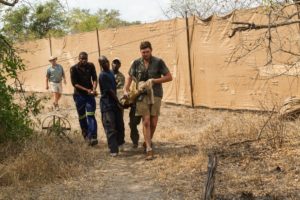 “Waterbuck is a dominant species and because of Gorongosa’s thriving ecosystem, their numbers have increased quite dramatically. Translocating some of them to Maputo Special Reserve reduces the risks of overpopulation in that habitat, while boosting the gene pool here. It is a win for all involved,” says Brian.

The reintroduction of oribi and waterbuck was made possible through generous funding from the Mozbio programme that has been supporting the rewilding of Maputo Special Reserve for the past four years. 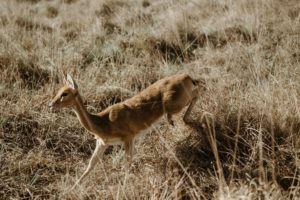 Mozambique has prioritised the protection and development of protected areas, which now covers an incredible quarter of the country’s landscape. “This translocation operation is being done under the guidance of ANAC, in partnership with Peace Parks Foundation, and shows that Gorongosa National Park, the flagship of conservation areas in Mozambique, is acting as a genetic bank for other conservation areas in Mozambique,” says Pedro.

Echoing these sentiments, Antony Alexander who works as Peace Parks’ Senior Project Manager in Mozambique says, “We believe that the work we do in partnership with the Government is going to make a real difference, not only in the lives of the people living in and adjacent to these protected areas, but in keeping our planet and its natural systems alive – which is critical to our survival. We hope that rewilding projects such as these will enable us in the near future to support other conservation areas in the same manner Gorongosa is contributing to Zinave and Maputo Special Reserve.”