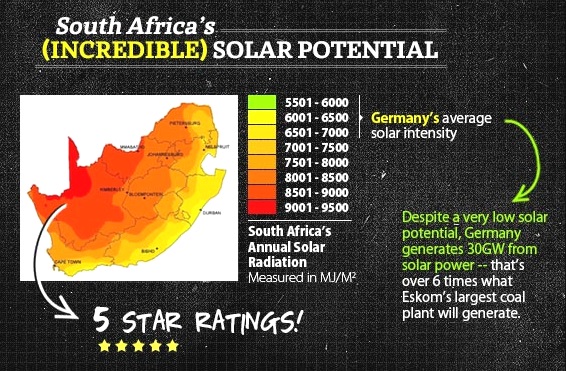 When we are faced with adversity, it is always easy to look for scapegoats and blame others for our misfortunes.

The complication with wrongly blaming others is that it does not alleviate anyone’s plight and, most importantly, it prevents people from turning their setbacks into comebacks. It is how we react to challenges that determines whether we overcome them or wilt under the pressure.

South Africa is the 12th largest emitter of carbon dioxide (CO2) in the world, responsible for nearly half of the continent’s CO2 emissions. Our energy sector accounts for 69% of that, largely due to our reliance on coal-generated power. This is not sustainable, as the country has pledged to peak its greenhouse gas emissions by 2025.

Eskom has had to reduce the intake of coal used to fire the majority of its power stations, because of the overall decline in electricity demand.

Demand has fallen to the point where Eskom is now sitting with an electricity surplus of around 4000MW, and has embarked on a strategy to export electricity to neighbouring countries. For example, the power utility recently entered into a five-year electricity sales agreement with Namibia.

It is the weak South African economy that is tipping the scales against coal as the main source of generating power, not the renewable energy programme. But coal and other sources of energy, including renewables may benefit when the economy recovers. Such an economic rebound will lead to an increase in demand in tandem with a spike in consumption of electricity.

Contrary to the perception that renewables will cost jobs, the solar and wind power sector has the potential to create thousands of jobs and to contribute positively to South Africa’s industrial development for the benefit of all stakeholders, including labour, government, communities, and investors.

A Green Jobs Report released in 2012 by two government development agencies, the Industrial Development Corporation and the Development Bank of Southern Africa, estimated that renewable energy has the potential to generate 130,000 new direct jobs by 2025. This would be across the entire renewables value chain, which comprises manufacturing of components and equipment, construction of renewable energy plants, installation, operations and maintenance.

If you include transport and logistics in the value chain, more renewable jobs could be created, as components and equipment have to be moved from manufacturing plants to customers. The coal truck drivers could diversify away from coal into renewables and deploy some of their trucks to transport equipment.

South Africa has the potential to attract wind and solar original equipment manufacturers (OMEs) to set up shop in our country, in the same way that car makers like General Motors, VW, Toyota, Daimler Chrysler and BMW have established plants in South Africa that manufacture and export vehicles. Renewable OMEs, particularly concentrated solar power players, could also integrate South Africa into their global supply chains.

To attract OMEs, South Africa would have to release to the market the 18,000MW allocated to renewable energy producers in the Integrated Resource Plan (IRP), published in 2010.

In South Africa, renewables do not only hold the key to unlocking jobs, they are also crucial to promoting rural economies and addressing our country’s skewed industrial development. For instance, wind and solar energy investors have brought projects worth more than R200 billion to the Eastern Cape and Northern Cape provinces. This substantial investment ensures that industrial development is spread across the country and not limited to the so-called “Golden Triangle” provinces of Gauteng, KwaZulu-Natal and Western Cape.

We should not reverse economic development gains made by the Eastern Cape and Northern Cape, which have exploited their infinite wind and solar energy resources.  On the contrary, we should be embracing renewables as many other citizens in the word are, since they represent technology, progress and prosperity.

Source: This is captured in the SADC Renewable Energy and Energy Efficiency Status Report of 2015.