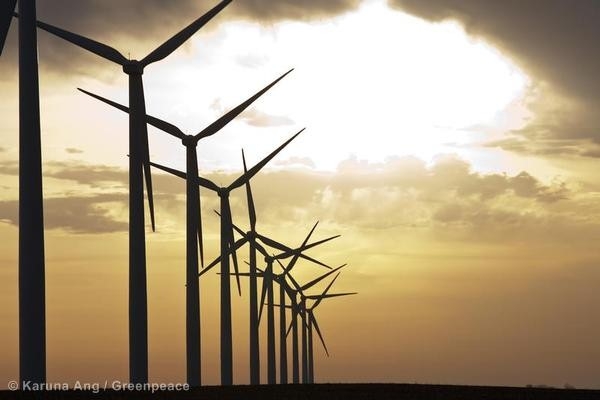 20 April 2012 – EU energy ministers should be preparing for ever more renewable power in their discussion of long-term energy plans at an informal meeting, which started in Denmark yesterday and is continuing today, Greenpeace said.

With renewables booming and nuclear power in terminal decline, energy ministers should back the clear favourite in discussions around the EU 2050 energy roadmap, the environmental group said.

Meanwhile, nuclear capacity in Europe shrank by eight percent from 2000 to 2011 to only 14 percent of total power generation capacity [4]. Costs for nuclear have consistently risen since the 1970s [5]. Electricity from new French-designed reactors  are predicted to be higher than prices for wind and solar in most locations [6]. This doesn’t take into account the full costs of nuclear liability, long-term waste storage or decommissioning.

The European Commission points to renewables forming the backbone of any future energy system at no extra cost. Its EU Energy Roadmap 2050 predicts that the share of renewable energy will rise to at least 55 percent, while for electricity, renewables could meet nearly 100 percent of demand by 2050 [7].

Time to back the winning horse

Greenpeace EU energy policy director Frauke Thies said: “Renewables are surging ahead in the technology race. Nuclear power is the old horse at the back of the pack that can only watch the renewables thoroughbred racing past to a two-length lead. It is obvious which horse energy ministers should back for a brighter energy future.”

Greenpeace EU climate policy director Joris den Blanken said: “The carbon market is said to be Europe’s ‘flagship’ climate tool, but it is a flagship that’s flooded with excess credits and taking us nowhere. To avoid a titanic loss of face, ministers need to signal a purge of surplus credits that are preventing the market from doing its job.”

[3] According to the International Energy Agency, prices have fallen by 75 percent to around €200 per MWh today, and projected to decrease to between €80 and €170 per MWh by 2020. See: www.energetics.com/resourcecenter/products/studies/Documents/iea_progress_metrics_report.pdf

[6] Electricity generation costs over the lifetime of the plant based on US Department of Energy cost methodology and data, with capital costs updated to current market prices. See also: www.greenpeace.org/international/Global/international/publications/nuclear/2012/EPR/399%20-%20EPR%20reportDEF-LR.pdf.