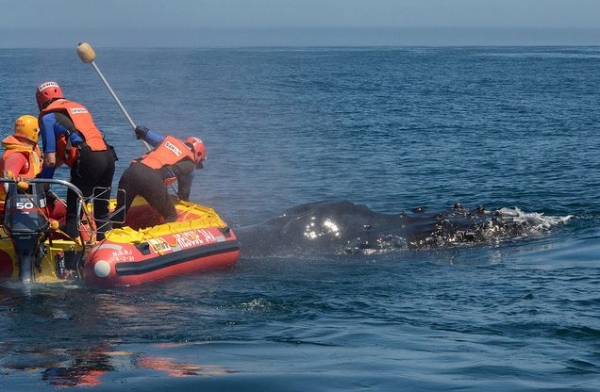 Last Thursday, members of the SA Whale Disentanglement Network were called in to help free a 9m humpback whale that was entangled in rope and seven flotation buoys South East of Dassen Island on the West Coast.

NSRI Yzerfontein volunteer duty crew launched two rigid inflatable sea rescue craft ROTARY ONWARDS and SPIRIT OF IFFLEY, carrying NSRI volunteers trained in Whale Disentanglement and volunteers of the SA Whale Disentanglement Network and members of the Department of Environmental Affairs – Oceans and Coasts and on arrival on-scene found the whale, a 9 meter juvenile Humpback whale, 4 nautical miles South East of Dassen Island with 7 ropes entangling the whale and one rope in the precarious position entangling the whale from the fluke and through the whales mouth and back to the flukes.

Sea conditions were favorable with flat seas and light winds. Working from the front of the head to the tail of the whale we had to first cut away the line through the mouth of the whale as this would have affected the whales ability to feed in the future. We began to cut away rope from the whale, using our specialized whale disentanglement cutting equipment.

Numerous cuts had to be made to remove all of the 7 ropes, which were in a bundle on top of the flukes and around the tail stalk, including the rope entangled through the mouth of the whale, were successfully cut free. As is normal in operations of this nature we broke one of our specialized cutting knives.

The operation was completed at approximately 14h50, but while the animal was not seriously injured it seemed like the whale was convinced it was still entangled and it took some convincing and coaxing from us for it to realize that it was free, and then it sped off looking  spritely and healthy.

The SA Whale Disentanglement Network is a specialized network of volunteers set up in 2006 to deal with these types of situations and comprises NSRI, The Department Of Environmental Affairs: Oceans and Coast, SA National Parks, Cape Nature, The SA Police Services, various aquariums from around South Africa, The Natal Sharks Board, Bayworld and various other organisations, with the help of the Dolphin Action and Protection Group (DAPG). SAWDN covers the entire SA coastline.