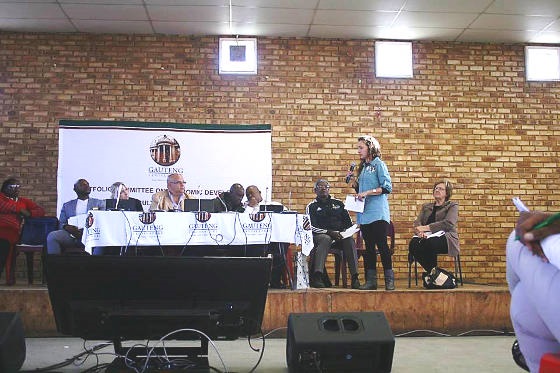 Calls to decolonise our seed system at Gauteng public hearings on the Plant Improvement and Plant Breeders’ Rights Bills.

Are there alternative systems that put farmers at the centre, do not reduce genetic and agricultural diversity, and support agroecology, seed and food sovereignty and resilience?

South African smallholder farmers, consumers, academics and civil society at large are finally taking up the cudgels against two pieces of legislation that regulate South Africa’s seed. The Plant Improvement Act and Plant Breeders’ Rights Act, promulgated in 1976, have entrenched and buttressed our industrial, corporate controlled agricultural system. Over the decades these laws have systematically eroded our food sovereignty and our indigenous seed and related agricultural knowledge, ultimately giving rise to our inequitable and flawed food system that currently leaves more than half of South African house-holds food insecure. The amendment of these laws (now Bills) brought an opportunity to transform the laws and reshape the food system. Instead, the laws are becoming more draconian.

On 26 May 2017, the African Centre for Biodiversity (ACB) travelled by bus to Tarlton, Krugersdorp with smallholder farmers associated with the University of Johannesburg’s Izindaba Zokudla initiative, to attend two Gauteng public hearings on the amendments held by the National Council of Provinces (NCOP). The discussion on the bus was lively as the farmers spoke about their struggles as small, urban food producers and the extensive hunger experienced in their communities and gained more knowledge about the impact of the laws under scrutiny at the public hearings.

On arrival, the car park was filled with cars, buses and tractors and the hall was filling up with farmers, community members, members of the legislature and councillors from the surrounding area. The unanticipated deluge of people created a delay in the proceedings, in order to accommodate everybody and distribute translation devices.

The Plant Improvement and Plant Breeders’ Rights Bills have undergone a process of development for the last four years. They have passed through the National Assembly and are now with the National Council of Provinces (NCOP), which is currently canvassing public opinion. The Plant Improvement Bill regulates the certification of seed, defining an array of criteria that seed must meet in order to be sold and traded both domestically and across borders.

The Plant Breeders’ Rights Bill is concerned with the intellectual property rights over seed and defines how farmers may recycle, sell, exchange and share protected seed varieties. Both Bills contain a strong bias toward seed that is appropriate for industrial, large-scale monocropping systems. The bills effectively close down the space for agro-ecological systems, in which social capital, sovereignty, soil health and diversity are highly prized.

In the hearing, the official line was in favour of the direction these laws as they provide the best means to deal with private investment in agriculture and plant breeding, climate change, job creation and poverty alleviation. With enthusiasm, the legal officer stated that the amendments seek to facilitate the role of smallholder farmers and ensure “radical economic transformation”. However, in reality, so many had gathered at the hearing to caution government that the Bills are in no way radical or transformational. Despite the post-apartheid rhetoric used by regulators during both hearings, such as “inclusion” and “transformation”, these Bills do not cater for the entry of small-scale enterprises in the seed sector and fail to acknowledge the role of small-scale farmers and their farmer managed seed systems (FMSS).

In our presentation, the ACB highlighted how valuable FMSS are: they represent a treasure trove of diversity and adaptability, linked to deep skill and knowledge. However, the role of smallholder production in providing nutrition to local communities is currently undervalued, and public resources in the form of institutional and extension support, and research and development go only to the commercial and corporate seed sector.

By Linzi Lewis and Sibusiso Nkosi.

Linzi and Sibusiso are with the African Centre for Biodiversity (ACB). We are grateful to Haidee Swanby for her contributions. The ACB is committed to dismantling inequalities in the food and agriculture system in Africa and believe in peoples’ right to healthy and culturally appropriate food produced through ecologically sound and sustainable methods, and their right to define their own food and agriculture systems.