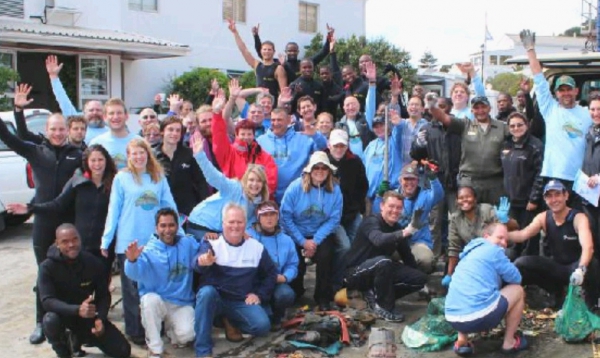 According to John Kieser, Sustainability Manager of Plastics|SA and National Coordinator for the ICC, this is the world’s biggest volunteer effort for ocean health. “From Kosi Bay on the East coast to Alexander Bay on the West coast, each year we see more and more communities and helpers of every age showing up to pick up and remove litter from our country’s beaches,” Kieser says.

This year in the Cape Provinces alone (Northern, Western and Eastern Cape, and Marion Island) 7 532 volunteers picked up litter and filled in the new-look data sheets which were developed by Ocean Conservancy. Various diving clubs took the initiative to coordinate underwater clean-ups in harbours, whilst a beach clean-up also took place on Robben Island. KwaZulu-Natal’s beach clean-ups attracted more than 6 000 volunteers on Saturday, with 1 600 youths attending a beach clean-up in the Durban Mangroves.

Marine animals such as sea turtles, seabirds, and marine mammals are particularly vulnerable to litter on the beaches, because they ingest it or get entangled in it – leading to a loss of nutrition, internal injury, intestinal blockage, starvation and even death. It is vitally important for us to remove rubbish from the beaches as quickly as possible,” Kieser (photograph left) explained.

This year, a total of 90 732 items were collected from beaches in the Cape Provinces via the audited clean-ups. “We managed to fill 14 800 refuse bags from litter collected over a total distance of approximately 79 kms above ground and 400m in underwater clean-ups,” Kieser said, adding that litter of every kind imaginable was collected, including a closed-circuit security camera on Robben Island, a wooden statue in the shape of a spider at Port St. John’s and a lava lamp which was picked up at Woodbridge Island.

Plastic micro debris was by far the most prevalent litter source on the beaches, followed by bottle caps, beverage bottles, food wrappers and straws.

“With the focus changing to material smaller than 2, 5 cm this year, small items such as cigarette filters and glass pieces moved up in numbers as compared to previous years. We are recognising this problem and Plastics|SA is engaged in on-going research with local and international bodies to try and find a workable solution,” Kieser said. Plastic bottle tops still keep their position as the macro item mostly collected.

Another interesting outcome of the clean-ups which took place in the Overberg, was the presence of a large number of unused condoms. The coordinators have suggested that this is due to the large scale poaching activities of Abalone and Rock Lobster where the condoms are used to cover their main source of communications – their cellular phones.

Plastics make our lives easier, protect our food and are used to save our lives. Once they have been used, plastic bags, food wrappers, bottles and caps must be recycled instead of being carelessly discarded on beaches or sent to landfill. We have a vibrant and growing plastics recycling industry that offers informal employment to more than 40 000 people who recycle plastic waste into gum boots, irrigation pipes, fibre duvets and pillows, plastic sheeting, photo frames and many other products.

“No matter where we live, we’re all connected to the ocean and litter on the beaches is everybody’s problem. Even litter that falls from our hands hundreds of kilometers away, eventually finds its way to the ocean,” Kieser says.

At the start of the annual December holidays when thousands of people flock to our beaches, Plastics|SA is appealing to the public to ensure that they dispose of their waste in a responsible way. “We know what is out there, but we now need to make sure it does not get there again as we take hands to turn the tide of waste in the marine environment,” Kieser says.