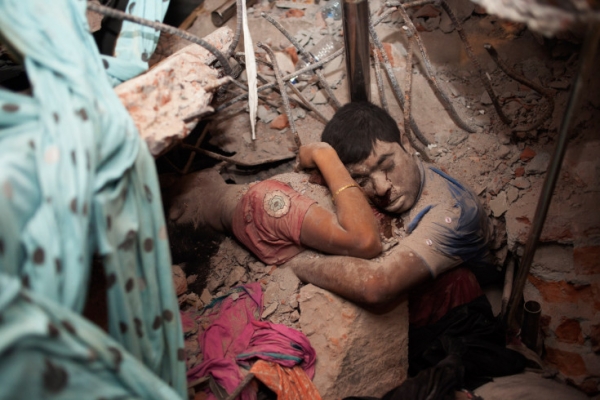 Several of the biggest Western retailers embraced a plan that would require them to pay for factory improvements in Bangladesh as the three-week search for victims of the worst garment-industry disaster in history ended recently with the death toll at a staggering 1,127.

Bangladesh’s government also agreed to allow garment workers to form unions without permission from factory owners. That decision came a day after it announced a plan to raise the minimum wage in the industry.

Months before the tragedy a fire at another garment factory in Bangladesh killed 112 workers.

Swedish retailing giant H&M, the biggest purchaser of garments from Bangladesh; British companies Primark and Tesco; C&A of the Netherlands; and Spain’s Inditex, owner of the Zara chain, said they would sign a contract that requires them to conduct independent safety inspections of factories and cover the costs of repairs.

The pact also calls for them to pay up to $500,000 a year toward the effort and to stop doing business with any factory that refuses to make safety improvements.

Some are still nonplussed

Two other companies agreed to sign last year: PVH, which makes clothes under the Calvin Klein, Tommy Hilfiger and Izod labels, and German retailer Tchibo. Among the big holdouts are Wal-Mart Stores, which is the second-largest producer of clothing in Bangladesh behind H&M, and the Gap.

“This agreement is exactly what is needed to finally bring an end to the epidemic of fire and building disasters that have taken so many lives in the garment industry in Bangladesh,” Scott Nova, executive director of the Worker Rights Consortium, one of the organizations pushing for the agreement.

Meanwhile, the search for bodies at Rana Plaza was called off Monday evening. For more than 19 days, the rubble pile in the Dhaka suburb of Savar had been the scene of frantic rescue efforts, anguished families and the overwhelming smell of decaying flesh.

“Now the site will be handed over to police for protection. There will be no more activities from the fire service or army,” said Mohammed Amir Hossain Mazumder, deputy director of fire service and civil defense.

Reshma Begum, a seamstress who survived under the rubble for 17 days on cookies and bottled water before she was rescued, told reporters at a hospital that she never expected to be rescued.

“I will not work in a garment factory again,” she vowed.

The Rana Plaza owner and eight other people, including garment factory owners, have been detained in the investigation. Authorities say the building owner added floors to the structure illegally and allowed the factories to install heavy equipment that the building was not designed to support.

Bangladesh has about 5,000 garment factories and 3.6 million garment workers. It is the third-biggest exporter of clothes in the world, after China and Italy.

Minimum wage among the lowest in the world

Working conditions in the $20 billion industry are grim, a result of government corruption, desperation for jobs, and industry indifference. Minimum wages for garment workers are among the lowest in the world at 3,000 takas ($38) a month.

On Monday, Bangladesh’s Cabinet approved an amendment lifting restrictions on forming unions in most industries, government spokesman Mosharraf Hossain Bhuiyan said. The old 2006 law required workers to obtain permission before they could unionize.

“No such permission from owners is now needed,” Bhuiyan said. “The government is doing it for the welfare of the workers.”

“The issue is not really about making a new law or amending the old one,” said Kalpana Akter of the Bangladesh Center for Workers Solidarity. “In the past, whenever workers tried to form associations they were subjected to beatings and harassment. The owners did not hesitate to fire such workers.”

No more oppression from police

Bangladesh’s government has in recent years cracked down on unions attempting to organize garment workers. In 2010 the government launched an Industrial Police force to crush street protests by thousands of workers demanding better pay and working conditions.

On Monday, nearly 100 garment factories shut down in the Ashulia industrial area near Dhaka after protests erupted over the death of a worker, Parul Akter, 22, whose body was found Friday inside a garment factory. A local police official, Badrul Alam, said she committed suicide.

Thousands of workers took to the streets and vandalized vehicles and shops before police used sticks to disperse the protesters. Several people were injured, said a police official who spoke on condition of anonymity because he was not authorized to speak publicly.

On Sunday, the Bangladesh government set up a new minimum wage board that will issue recommendations for pay raises within three months. The Cabinet will then decide whether to accept those proposals. The wage board will include representatives of factory owners, workers and the government.

Since 2005, at least 1,800 garment workers have been killed in factory fires and building collapses in Bangladesh, according to the advocacy group International Labor Rights Forum.

In the blaze last November in Dhaka, the factory lacked emergency exits, and its owner said only three floors of the eight-story building were legally built.

Two victims amid the rubble of a garment factory building collapse in Savar, near Dhaka, Bangladesh. By Taslima Akhter – read her heartbreaking account over at TIME Lightbox.