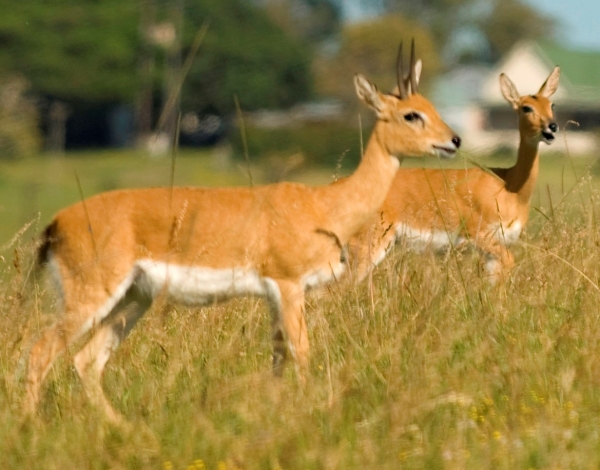 The Endangered Wildlife Trust Threatened Grassland Species Programme (EWT-TGSP) has entered into an exciting partnership with the South Africa Community Action Network (SA CAN) that will assist the EWT in combating illegal hunting with dogs, especially when threatened species such as Oribi are targeted.

The Oribi, a highly specialised antelope inhabiting Africa’s temperate grasslands, has been classified as Endangered in the South African Red Data Book for Mammals because of its rapid decline in recent years. The greatest threat faced by the diminutive Oribi is the relentless destruction of its habitat, and the persistent targeting of the species by hunters using dogs. The only workable solutions to this problem depend on full community support, and this is where SA CAN comes in.

SA CAN is a private company which specialises in coordinating both public and private safety and security resources to ensure the best possible response to emergency situations. SA CAN has long understood that there is an urgent need to cultivate security-conscious communities made up not only of those who can afford safety and security services, but also those that cannot. To ensure that this happens, the organisation developed ‘SA CAN Members’, an SOS support line that the non-paying public can phone in order to get the benefit of SA CAN’s extensive network.

“SA CAN is currently running a Rural Safety Pilot Project involving the Howick, Estcourt and Ladysmith Clusters of the South African Police Service (SAPS). The aim is to use SA CAN’s unique technology and existing network of influential individuals and organizations to draw all public safety and security role-players together with farmer associations, private security companies and local medical response initiatives. By partnering with SA CAN, the EWT instantly joins hands with the leadership of the region’s Farm Associations and SAPS Clusters.”

Part of what SA CAN is doing in areas occupied by the Oribi is erecting signage on property gates and at the head of key district roads. Every sign’s GPS co-ordinates have been logged and loaded onto the database at the SA CAN Incident Management Centre (IMC).

Dr Ian Little, Programme Manager of the EWT’s TGSP, commented, “When the logging of the signage is complete emergency responses will be elevated to a completely new level as there will be no need to refer to cumbersome maps. This will help the EWT, supported by Ezemvelo KZN Wildlife Conservation Officers and the SAPS, in rapid responses to emergencies and incidence of poaching, greatly increasing the number of arrests and convictions. We will be able to quickly halt and arrest those taking part in hunting of the Oribi with dogs and this will mean that this species has a chance at recovering its numbers and coming back from the brink of extinction.”

The Estcourt Farm Association has already stepped forward and will be helping put up signs and log GPS co-ordinates in its area. Individual property owners can register for the service for free, or by subscribing to the SA CAN IMC National Dispatching Systems.