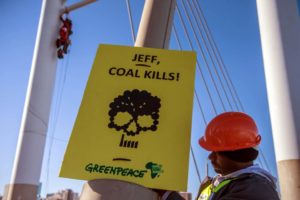 “Greenpeace Africa rejects with utter contempt Eskom’s effort to downplay the massive health impacts of their noncompliance with air pollution legislation. Both decision-makers and the public deserve the truth. In the interests of millions of South Africans and our constitutional right to a healthy environment, no further postponements can be given to Eskom’s highly polluting coal-fired power stations,” said Melita Steele, Senior Climate and Energy Campaign Manager for Greenpeace Africa

Greenpeace Africa has released a scientific review of Eskom’s own cost-benefit analysis for its proposed postponement and/or suspension from compliance with the Minimum Emission Standards (MES).

As part of its application for postponements from complying with the MES, Eskom completed a health impact assessment and cost-benefit analysis to support its position that it will cost too much to comply, and that the costs of compliance outweigh the benefits. In order to respond fully to these claims, Greenpeace Africa commissioned Dr Michael Holland and Dr Joseph Spadaro, international experts in the field of health impact assessments of air pollution, to undertake a detailed, independent review of Eskom’s report.

“The review of Eskom’s so-called ‘cost-benefit analysis’ has made it clear that Eskom is intentionally misleading the public and decision-makers by substantially underestimating the health impacts of the utility’s coal-fired power stations in a bid to avoid compliance with relatively weak air quality legislation,” said Melita Steele, Senior Climate and Energy Campaign Manager for Greenpeace Africa.

The review was necessitated by the air pollution crisis in Mpumalanga, the length of time that Eskom has had available in which to prepare to comply, the flawed application, and the thousands of premature deaths that will be caused if Eskom does not comply.

Following the shift in focus of the State Capture Commission onto Eskom, it is undeniably necessary that South Africans are given the honesty that will empower them to deal with the electricity crisis effectively.

Main conclusions of the review: