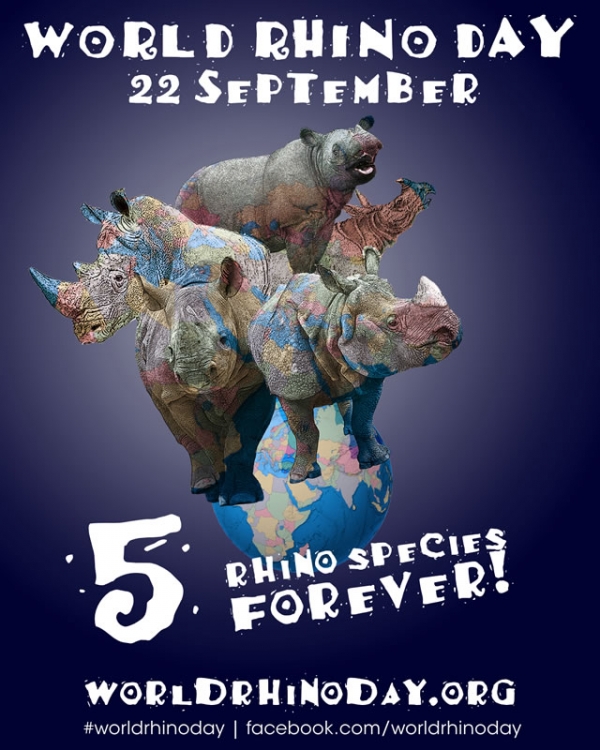 World Rhino Day in South Africa will see conservationists and concerned citizens reflecting on another tragic year, the fifth in a row, where a record number of rhinos poached will most certainly be reached. To put the current rhino poaching war into perspective, South Africa has lost a total of 2409 rhinos since 2000. However, 95% (or 2289) of these losses have been in the past five years. This is a significant number when one considers there are only approximately 25 500 rhinos remaining on the continent.

At present, South Africa is losing one rhino every nine hours and a total reported number of rhinos killed so far this year is sitting at 635. It may seem to the public and uniformed, that no headway has been made. However the Wildlife and Environment Society of South Africa (WESSA) is of the firm opinion that the situation would be far worse if it were not for the difference that a wide range of continued committed government departments, conservation organisations and individuals has made.

The impact of poaching in South Africa could soon take its toll on one of the country’s most lucrative sectors: tourism. According to a number of reports this is already happening in Tanzania, where tourism is the second most valuable sector to their economy. The Tanzanian Wildlife Research Institute has reported that there may be as many as 30 elephants being poached per day which is believed to be contributing to a declining tourism economy over the last two years.

Similarly, tourism in Mozambique is extremely important as it has shown a 13% year-on-year increase since 2006 and is estimated to account for 14% of the GDP by 2014. Currently with the uncontrolled nature of poaching in the country it has resulted in a culture of unsustainable resource consumption preventing the growth and development of safari tourism in Mozambique and ultimately sustainable employment opportunities for a poverty stricken population.

This week the South African Minister of Tourism, Martinus van Schalkwyk, announced that tourism in the country provides more employment opportunities than mining. “This is hugely significant,” says Chris Galliers, WESSAs Rhino Initiative co-ordinator. “It is also the only major sector that has experienced sustained growth way above that of any other sector during a period of global economic stagnation. Therefore the question is whether as a country who is concerned about future economic growth is giving due consideration to the actual value of these animals to the country from a non-consumptive viewpoint? We need to shift our thinking from the, ‘if it pays it stays’ paradigm, to one where ‘if it stays, it pays’.”

Responsible safari and ecotourism operations are major draw cards and South Africa still offers the world’s most accessible opportunities to view rhinos in their natural habitat. This gives our safari tourism a hugely competitive edge over other African countries.

Therefore there is good reason for government and every citizen to take action against a crime that could negatively impact on our tourism to ensure that it continues to play a vital economic role. Once again we need to celebrate rhinos as part of our natural heritage, for the impressive animals that they are and because it is just the right thing to do.