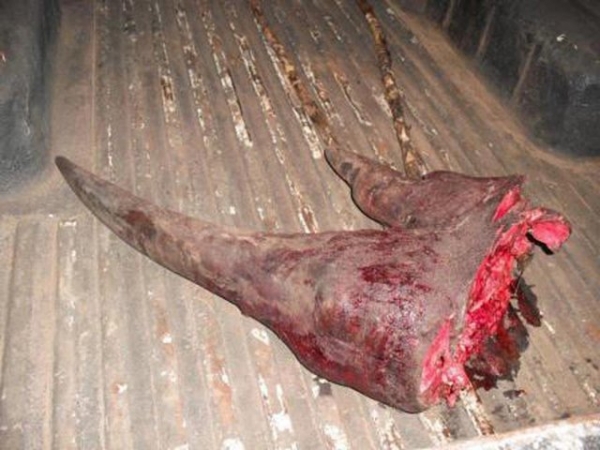 It’s time to halt SA’s rhino trade until we can sort out our poaching problem. If we don’t do this, we will likely lose them forever, according to Margot Stewart of online advocacy website Causes.

After 1995 SA authorities began to sell off high value wild animals such as rhino so that private individuals (mostly farmers but there is a growing body of evidence suggesting investment syndicates) could for the first time obtain these and conduct the business of wildlife farming – a relatively new industry.

In their proposal at CoP9, South Africa set out the reasons why the status of the Southern White Rhino should be down listed. They declared a healthy and growing population under effective management and living in the perfect habitat. They claimed that the rhinos could withstand the exploitation that trade would bring and that trade would not lead to reduction in controls in other species. NONE OF THESE CLAIMS ARE VALID TODAY, 20 years on.

In fact, since the sale of rhino to private owners the authorities and scientists have lost all control over the recording of population figures, except to say that the numbers don’t add up and this proves that horn is moving illegally from farmers to the Far East.

it’s just not working out

The proposers felt confident enough to promote privatization schemes and trophy hunting, even claiming that trade “will not result in an increased level of undesirable or illegal exploitation of the southern white rhinoceros.” This has also proven to be wrong. Rhino species populations are decreasing and even going extinct due to unprecedented increases in poaching.

In 1994 rhino horn was used for Yemenite dagger making and TCM medicine. The proposers of this industry were surely aware then that rhino horn has no valid medicinal worth. As younger generations spurn old traditions new uses for rhino horn is found by the crime syndicates, such as “hangover cures” for yuppies. The majority of these products would be derived from live animals (using inhumane capture methods: darting with M-99, a practice rejected by animal welfare NGO’s).

Ever since CITES was first established the question of trade in rhinoceros horn has been raised over and over again and the issue of poaching remains a problem. Certain parties in South Africa, including Government parastatals insist on keeping the hope of trading horn alive. The International Community is not in agreement and attempts to compromise, for example by agreeing to the South African proposal in 1994, have only worsened the situation.

Southern White will be next to go

Firm action must be taken immediately if the Southern White Rhino is to be spared the fate of other rhino species, 2 of which went extinct in 2011 – one in a range and one in totality. The escalation of poaching and criminal activity is also driven by newfound wealth & status in the Far East.

Last year over 400 rhinos were poached in South Africa this year that we know of. The last few thousand remaining rhinos on earth must receive the highest form of protection, NOT increased exploitation. I could mention many other points of discussion but both the CITES Secretariat and NGO’s such as TRAFFIC and IUCN are fully aware of the situation.

Unfortunately, because of the proximity of Swaziland and the possibility of rhinos being processed through that country we recommend that the rhino population of that country is also included in our proposal. Especially because Swaziland obtained permission to trade live rhinos on the basis that South Africa had been successful.