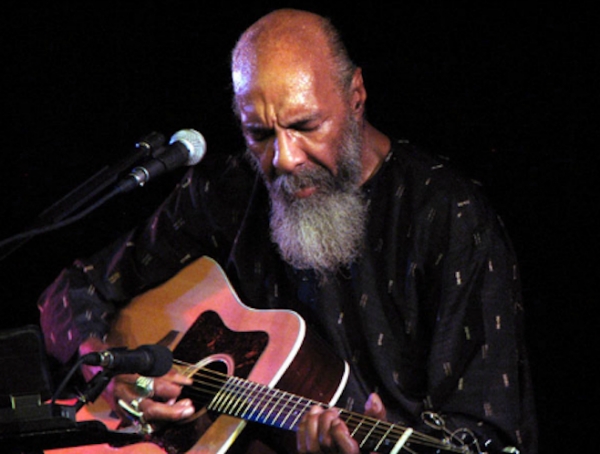 Folk icon and activist Richie Havens has died after suffering a heart attack this morning. He was 72. Havens is best known as one of the standout artists from the original Woodstock festival and film, though his career went far beyond just that career-making performance.

His career spanned over four decades and included over 25 albums. He retired from full-on touring only three years ago after suffering complications from kidney surgery.

With its rhythmic guitar work and intimate sound, Havens’ version of The Beatles’ “Here Comes The Sun” is a fairly good representation of his sound—a soulful sound that is even now uniquely his. In it you can sense Havens’ fiery passion for the social justice and commonality he so often sang about.

Havens was born in Brooklyn, the eldest of nine children. He began performing in street corner doo-wop groups before venturing into Greenwich Village during the height of the beatnik movement. Eventually, word about Havens’ excellent performances spread among the folk scene there, and after making two records, he signed with Bob Dylan’s manager, Albert Grossman, and landed a deal with Verve Forecast, the label that released 1967’s Mixed Bag. By 1969, Havens had recorded and released five more albums, with 1968’s Something Else Again being the singer-songwriter’s first real hit.

As the first performer at the 1969 Woodstock Festival, Havens ended up playing a three-hour set in large part because so many artists were delayed reaching Max Yasgur’s farm. He was called back for several encores and, finally out of material, even improvised a song that was later called “Freedom,” based on the old spiritual “Motherless Child.”

Havens started his label, Stormy Forest, in 1970, and began acting soon after, appearing on stage in The Who’s Tommy in 1972. He performed at Bill Clinton’s inauguration in 1993. His autobiography, They Can’t Hide Us Anymore, was published in 2000. In 2007, he appeared in Todd Haynes’ Dylan biopic, I’m Not There. (Havens’ version of “Tombstone Blues” was on the film’s soundtrack.)

Havens was also known for his environmental activism and charity work. He established a children’s museum in the Bronx, the North Wind Undersea Institute, and created the Natural Guard organization to teach children about the environment. He was awarded the Peace Abbey Courage of Conscience Award in 1991.

In 2000, Havens published an autobiography titled They Can’t Hide Us Anymore, which was co-written with Steve Davidowitz. The Amazon profile page description reads:

In this warm, highly personal narrative, Richie Havens recounts a musical career that began on the streets of Bed-Stuy and matured amidst the creative explosion that was Greenwich Village in the Sixties, where he joined other blazing talents in bringing lush poetry and a social conscience to popular music. From Richie’s unique vantage point, we watch the emerging careers of Bob Dylan, Joan Baez, Jimi Hendrix, Lou Gossett, Jr. (who co-wrote one of Richie’s most famous songs), John Sebastian, Cass Elliott, Peter, Paul & Mary, and more.

He also describes the friendship that created his foundation for marine study and conservation, the remarkable song that sent him on a mission of peace to the Middle East, his work mobilizing schoolchildren as environmental activists, and the true legacy of the generation that announced its presence through music and is now in the process of passing the torch to its own descendants.

A public memorial will be announced at a later date, according to a press release.

Richie Havens was gifted with one of the most recognizable voices in popular music. His fiery, poignant, soulful singing style has remained unique and ageless since his historic appearance at Woodstock in 1969. For four decades, Havens used his music to convey passionate messages of brotherhood and personal freedom.

From Woodstock to The Isle of Wight to Glastonbury to the Fillmore Auditorium to Royal Albert Hall to Carnegie Hall, Richie played the most legendary music festivals that ever were, and most of the world’s greatest concert venues. But even when performing in a Greenwich Village coffeehouse or a small club or regional theater, he was eternally grateful that people in any number turned up each time to hear him sing. More than anything, he felt incredibly blessed to have met so many of you along the way.