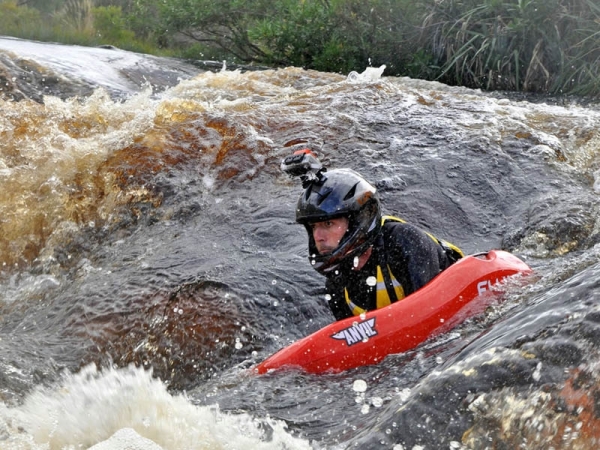 He aims to follow the length of the Orange River – from its source in Lesotho to the Atlantic Ocean – by riverboard. Titled ‘The Plastics SA Nampak Rigid Plastics Orange River Project’, Chaplin will take four to six months to accomplish this mammoth journey.

There have been other expeditions that have set out to navigate the length of the Orange River. There have been plastic kayaks, racing kayaks and even a swimming relay that took on the river for a couple of days at a time over several years. A major river in South Africa, the Orange regularly welcomes kayaks and rafts on commercially-operated sections. But to navigate the length of the river, in the water, by riverboard and alone? Chaplin is embarking on an adventurous first.

Riverboarding is an in-the-water discipline where the athlete lies on a buoyant board to travel down a river. This isn’t an ordinary boogie-board, like those used in swimming training or at the beach. Chaplin’s specialised river craft is moulded from hard plastic by the Parys-based kayak design and manufacturing company, Fluid. This riverboard, called a Fluid Anvil, has Chaplin positioned so that his forearms, elbows and chest rest on the board while his feet – wearing fins – kick for propulsion and steering. A water-sports discipline, riverboarding is termed ‘face level’ as the athlete’s head is only just above water.

The riverboard offers limited protection from rocky collisions in rapids, which is why a full-face helmet and knee pads are crucial. Although he’ll portage the Gariep and Van Der Kloof Dam walls and the major waterfalls of Augrabies Falls, Twin Falls and Richie Falls, the rest of the time he’ll be in the water moving through rapids and flat-water sections on the riverboard. 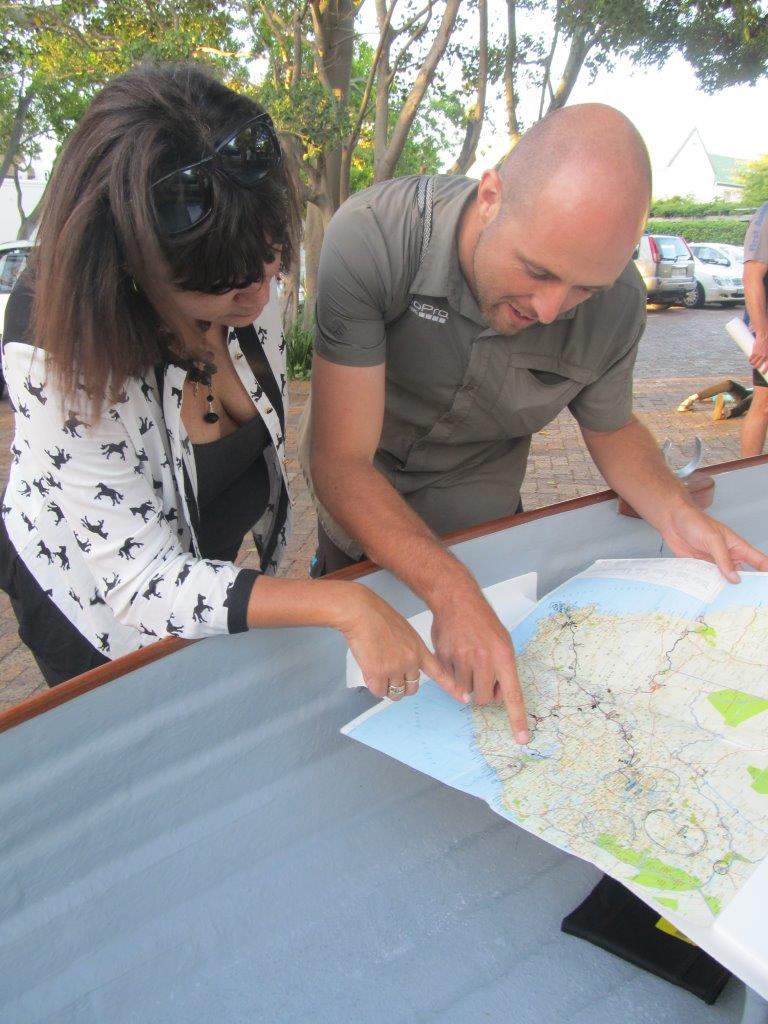 Chaplin’s journey started on Saturday, April 6, 2013 from the Mnweni Valley in the Central Drakensberg. For the first 80km the river is small in size with a low volume of water and a steep gradient, which makes it unnavigable. Yet Chaplin kept to his source-to-sea objective by carrying the riverboard from the start.

When he set off on foot from the Mnweni Cultural Village he carried a waterproof backpack loaded with everything he needs for this journey – clothing, first aid supplies, food, camping equipment and riverboarding gear. On top of this he strapped his riverboard and helmet. The riverboard alone weighs in at little under 10kg; he set off with 40kg on his back.

A hiking trail will take Chaplin into the valley and to the top of the Mnweni Pass and into Lesotho. Here, at 3 000m above sea level, lies the source of the Orange River – an, open expanse of marsh and small streams that first becomes the Senqu River and, later, the Orange River. Hiking parallel to the stream, it will take him a week to cover the 80km to the first main settlement, the village of Mokhotlong in Lesotho. He’ll re-stock food supplies and can get into the river for the first time.

The Fluid Anvil has limited storage space in its waterproof hull, which Chaplin will use to stow food. Everything else will be stashed in drybags within a waterproof backpack.

Chaplin’s biggest concerns are infection, skin conditions and drowning. He’ll be in the water during daylight hours – that’s a good 10 hours a day. Along much of the 2 300km distance water quality is questionable. Every cut and scrape as well as eyes, ears, mouth, orifices and even areas like nailbeds and bellybutton are exposed to infectious agents.

“Each day I’ll spend an hour out of the water at lunchtime to dry out and at the end of the day I’ve got antiseptic soap to scrub down. I’ll have one day a week not in the water to thoroughly dry my skin and disinfect,” he explains. “I’ve really got to take care not to get any open wounds, because this could be serious trouble.”

Chaplin is cautious of getting a fin and foot trapped between rocks (known as foot entrapment) as well as hazardous river features like strainers and syphons. He has been training for months on the Plamiet, Molenaars, Dwars and Liesbeek rivers in Cape Town at both high and low volume. He also trained at Wadi Adventure, a white water park in Abu Dhabi, to hone his skills in swift-moving water. 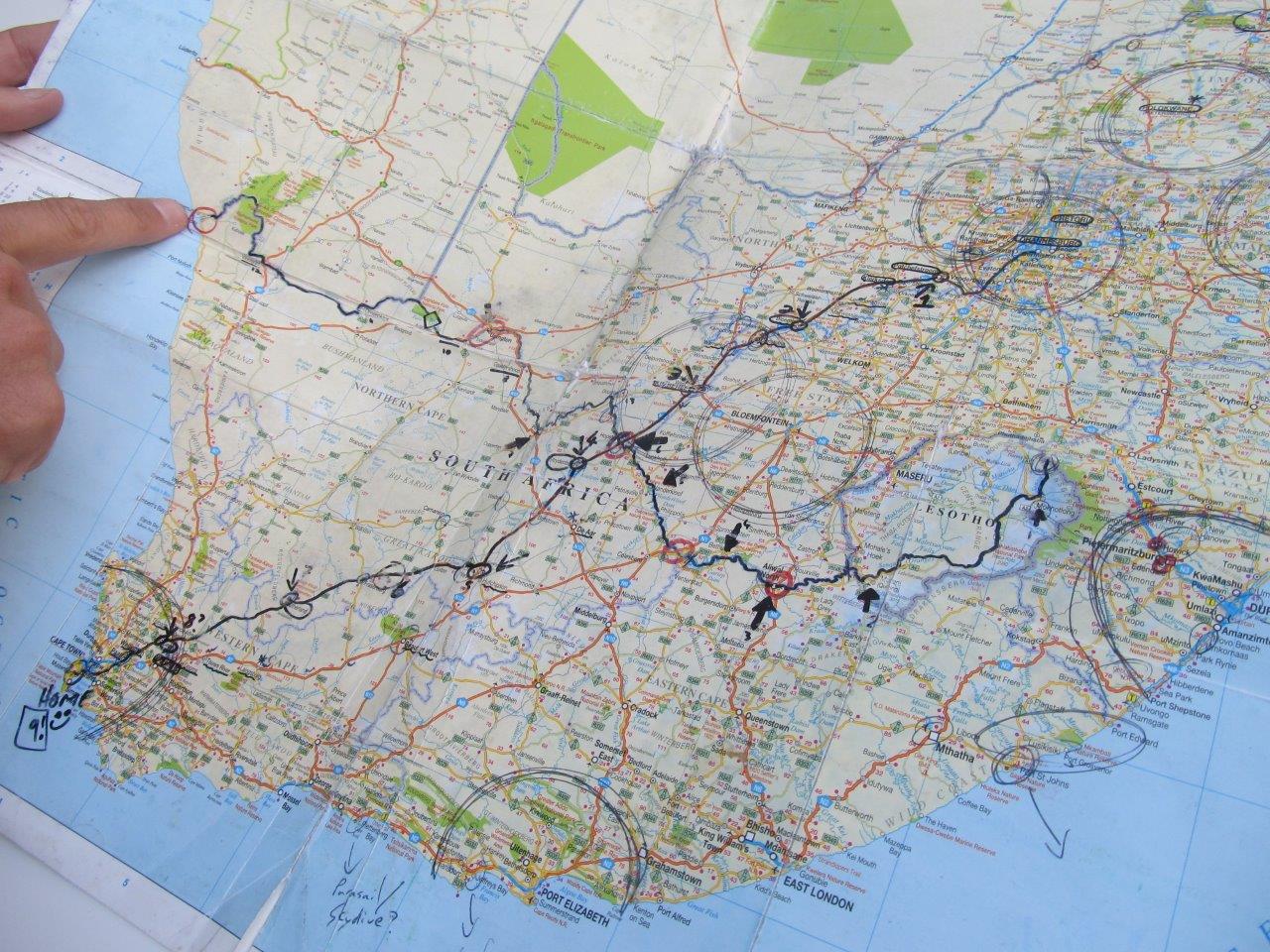 Chaplin accompanied very experienced river kayakers from the Cape White Water Club on numerous trips last year to learn from them. “They taught me to read water and how to take defensive action to get myself out of trouble. They have given me the confidence to undertake this project alone,” he says.

Ironically, Chaplin’s specialised riverboard is plastic and it was this same material that sparked the idea for this expedition.

“During my time on the Dwars River last year, high up near the watershed, I was horrified by the amount of plastic waste in the water and hanging from vegetation on the riverbank after flooding. Litter and waste from people starts off on land, ends up in rivers and is pushed into in the sea,” he says. “I became very ill from this trip as a result of the water pollution.”

The water samples that Chaplin takes, every 100km along the River, will be analysed for pathogens and contaminants – an indication as to the health of the river as it passes through populated, agricultural and remote areas. On his rest days, he will lead clean-up activities, encouraging the participation of children and adults from communities along the river. 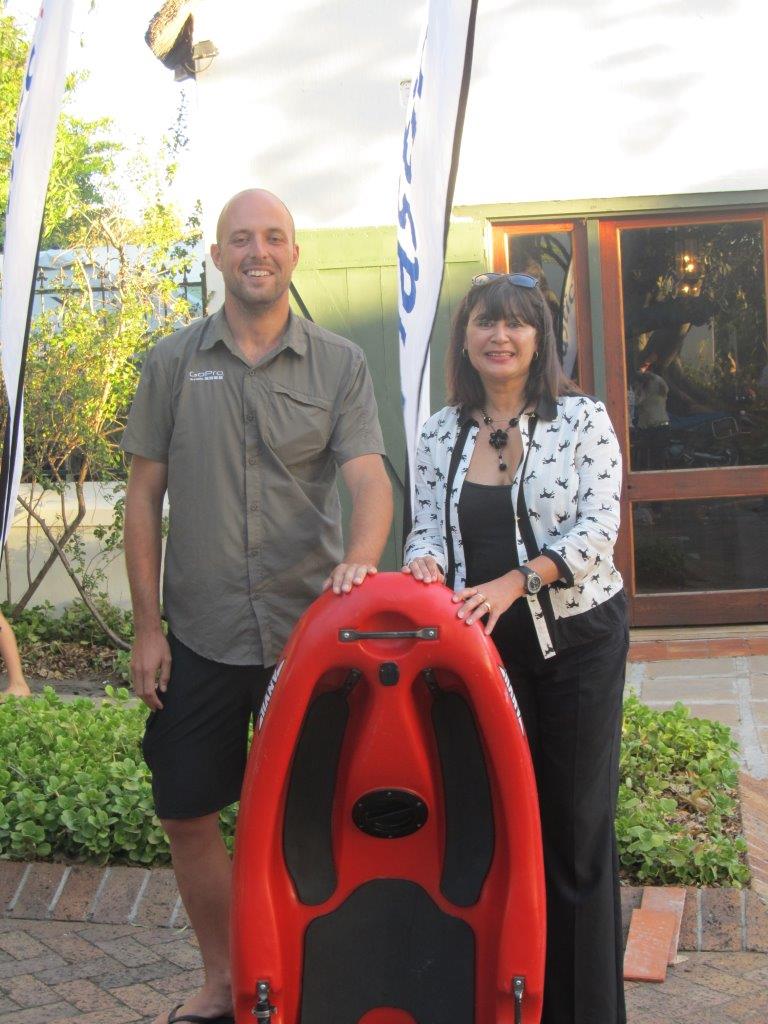 “Thanks to the financial support of institutions such as Plastics|SA and Nampak Rigid Plastics who are sponsoring my quest, I am able to convey the message to people around the world that what we are doing inland ultimately has an effect on the water sources around the country. Trash travels to the ocean by way of storm drains and waterways, ending up in our country’s rivers before making its way to the ocean. This entire fragile network is connected. Even litter that falls from our hands hundreds of kilometers away, eventually finds its way to the ocean.”

How plastics enable Ray Chaplin to complete his swim:

“Ray’s efforts and message echo the mission of Plastics|SA’s Cleanup and recycle “Berg2beach” campaign which aims to encourage hikers, mountaineers, fishermen, canoeists, kayakers and divers  to ensure that our country is clean and green by showing a commitment and support of the plastics industries environmental initiatives.

Ray will be visiting schools and municipalities along the route to educate school learners and to create awareness for plastics recycling”, says Douw Steyn, Director: Sustainability of Plastics|SA.

“Like so many sports people out there, Ray will be relying on plastics to practice his sport.  From his riverboard to his helmet, wetsuit and fins – everything is made from plastics.  However, we also have a responsibility to keep our environment clean in order to ensure the sustainability and beauty of our environment for many generations to come.”

Chaplin’s journey can be followed online through his website, social media and live tracking: