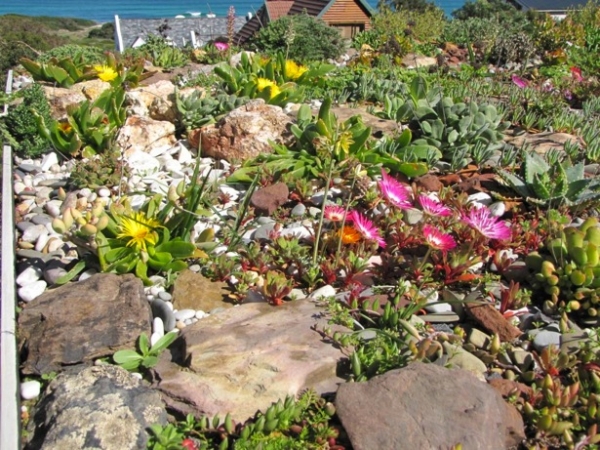 “Everyone should have a green roof, it’s a no-brainer really,” says Tom Gray.

A green roof is so much more than a roof garden, I discovered in Scarborough. It’s a living roof that’s attractive, insulates and benefits the environment.

Tom Gray has been building these living roofs for many years now, and believes they are the roofs of the future. 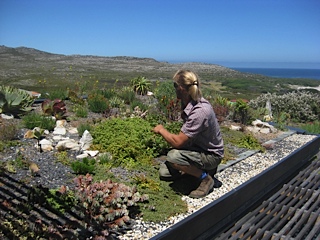 The first green roof we visit in Scarborough belongs to Cindy and Richard Hartley. and is best viewed from a deck overlooking the roof.

It’s a succulent garden, around 40 sq m in size, and sits at a slight angle for better drainage. From the deck you look across the planted roof to the reserve and the sea, and instead of seeing a roof, your view is of vegetation.

Not only aesthetically pleasing, but useful too

While aesthetic considerations are one of the reasons for a green roof, there are a lot more. Insulation is one, creating new green spaces another. There is a lot of insect life buzzing around this garden.

Gray grew up around plants at his parents’ Good Hope Nursery near Cape Point and has always loved fynbos. After training as a carpenter he moved into the nursery business and started his own landscaping business Good Hope Gardens. “I became interested in the architectural aspect of the roof garden, the aesthetics, but also its insulation properties. The growing roof keeps the room below it cool in summer and warm in winter.”

Helping the fight against climate change

Considering the impact of climate change, this should be the roof of the future, especially in densely-built urban areas.

“I researched the field, but there was little information available, and so started experimenting with different materials.” A dog’s kennel was the first experiment. Drainage is all-important with a roof garden. This garden has a gravel pit around it rather than gutters to filter the water.

“The big thing is to have drainage layers, and there are a number of products on the market.” Through lots of trial and error, Gray has found materials which work well. “There are many ways to do it, but if you’re working on a large scale it makes sense to buy the material – it saves time.”

Many factors to consider

It’s important to start with a 100% waterproof roof, you really don’t want leaks.
Each green roof is designed taking into consideration many factors, such as situation, depth of soil, and the homeowner’s preferences. “I work with the client to see what they want – Cindy was hands on and very involved.”

It also depends on the building – if its design requires lightweight structures, that limits the depth of soil, and in turn which plants can be planted there. 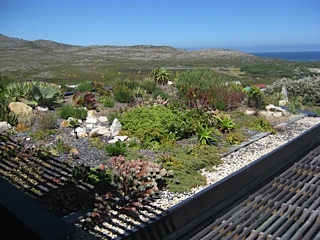 “The depth varies between 120mm to 200 mm soil,” says Gray. However one of his gardens in Fish Hoek has deeper soil, and can be planted with vegetables.

Wind is another factor to consider on green roof gardens, as it can blow many times harder on the roof than on the ground.

Succulents, especially those endemic to the Western Cape, are ideally suited to these green roof gardens. Gray likes using Portulacaria afra or repens, also known as Elephant’s food or spekboom. They’re great plants for a green roof, and although it doesn’t often flower,  they don’t die.” They are also carbon sink plants, binding atmospheric carbon which is partly responsible for climate change.

The Glottiphylum is another of his favourites, with its bright yellow flowers and light green leaves. “It’s known as tortoise food. Gardeners find it hard to grow because tortoises eat them, so they’re great for the roof. I use as many plants as I can that are endemic to the Western Cape, such as cotyledons (known as pigs’ ears), senecio, and I use a lot of euphorbias and crassula.  Stapelias are great, really tough.”

The roof does need regular maintenance. “Initially I plant long- and short-term plants. This garden is around six years old, and some plants need replacing.”

It also needs some watering: “With this depth of soil you need to irrigate in the heat of summer. Although it does hold some moisture, it also dries out in the extreme heat.”

Another garden in Scarborough

Botanist Nick Helme’s green roof garden, also in Scarborough, seldom gets watered and when it does it is with a sprinkle from his hosepipe.  His garden is built on top of his office, a timber-frame structure. (see main image)

The roof was at the level of his deck, he says, and he didn’t want to look straight onto a glistening roof. So they created a green roof. 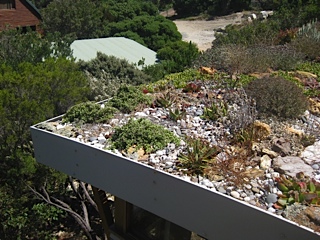 With his extensive knowledge of plants, Helme was very involved in plant choice. His garden is about 18 months old, and he has limited his choices of plants to those from the Western Cape, which includes the Little Karoo. “I don’t want arid succulents, though, not in a high winter rainfall area.”

He has about 60 species growing here, a few of them rare plants.

May to December is the best time of year for the garden. He’s planted many bulbs, but the only problem with these is that the baboons like them.

Maintenance means just a hop over the railing onto the roof to weed. “As a botanist I’m obsessed with aliens and the first spring season I weeded them out as I saw them.”
Drainage is excellent, and slow. After a deluge, the water only begins to drain after 20 minutes, and then drips slowly off the edge for a few hours.

Green roof gardens are growing in popularity, slowly, as one way to mitigate pollution in cities. They’re a way to increase green spaces in built environments, there’s no need to repaint your roof or clean your gutters, and the drainage acts as a filter for “acid” rain, so what runs out the outlet pipes is clean. They are also natural insulators against heat and cold.

* Find out more on www.capepoint.com.