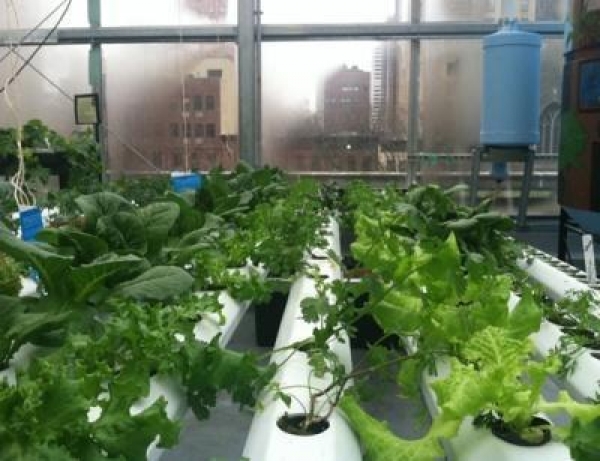 The bagged organic baby mixed greens on sale a Whole Foods Market in Bethesda, MD, USA are not very “green” at all. To grow the lettuce, vast amounts of water must be moved from the Colorado River to California, the most hydrologically altered landmass on the planet.

The lettuce is picked, packaged, washed and shipped in refrigerated trucks (because it’s perishable) roughly 2,800 miles across America. The cost? $3.99. If you believe that the demand for water and oil are going to grow, this five oz. bag of greens will only get more expensive.

There ought to be a better way of getting lettuce into the hands of supermarket shoppers.

Paul Lightfoot, the chief executive of BrightFarms, a New York City-based startup, thinks he has found one: His company is planning to design, build, finance and operate hydroponic greenhouse farms on supermarket rooftops, eliminating time, distance and cost from the food supply chain.

As local as possible

You can’t get more local than that unless you grow vegetables in your own backyard.

“It’s better food, better for the environment and better for business,” says Lightfoot.

The a 41-year-old CEO was trained as a lawyer, ran a software company that managed retail supply chains and has now married his passion for food with his work, he told me when we spoke by Skype the other day. “I’ve been annoying my friends and family about local food for a long time,” Lightfoot jokes.

The idea of growing veggies on the roof of a supermarket struck me as cute, but what I wanted to know was whether it could become a real business, with scale. One of my reservations about local food is that small farms (and most farms near cities are small) can’t compete on price with big ones. So food at many farmer’s markets tends to be a pleasant indulgence for those of us who can afford it.

“I’m first and foremost a capitalist,” Lightfoot replied. “I’m about listening to clients and meeting their needs. If it was about cute, I wouldn’t be here. It’s absolutely about delivering them higher profits.”

So are supermarkets buying this bold new idea? “We’re working with a bunch of big retailers,” Lightfoot says, vaguely. Seven have signed letters of intent to install a greenhouse and he expects a couple to be built this year. The company built a small demonstration project at a Whole Foods in New Jersey, but Lightfoot says they are taking aim at the mainstream. “Our mission is to improve the environmental impact of the food supply chain, so we’re going to go where the food is,” he says.

BrightFarms grew out of a nonprofit called New York SunWorks, which built a popular project called the Science Barge, a solar-powered urban farm now docked in Yonkers, N.Y. (Celebrity backers of NY SunWorks include Cameron Diaz and Lauren Bacall.) Ted Caplow, a scientist and engineer who founded NY SunWorks, also started BrightFarms and sits on its board.

Last month, BrightFarms announced the completion of a new round of financing. Investors include Robert Kenner, the Oscar-nominated director of the movie Food Inc.; Ali Partovi and Hadi Partovi, entrepreneurs and angel investors who have advised and invested in companies such as Facebook, Zappos and oPower; Robertson and Jigar Shah, the founders of SunEdison; and Marc Stuart, a founder of Ecosecurities and a private equity investor in the carbon and clean energy space. The company didn’t say how much money it has raised.

An investor and director in BrightFarms is Brian Robertson, the co-founder and former president of SunEdison, and that’s no accident. SunEdison pioneered the idea of selling solar power as a service; it owns the panels it installs, finances their cost and manages the solar system in exchange for an agreement from the buyer to purchase power at a set price over time. BrightFarms has a similar business model: It will design, finance, own and operate the farm, if the supermarket agrees to buy the produce for 10 years at a fixed price tied to the consumer price index.

So what’s the value proposition behind BrightFarms?

“First, it’s better food,” Lightfoot said. “By not spending a week being shipped, it’s much more nutritious, much more attractive, much fresher and tastier.”

Second, “it’s better for the environment, at least for certain products such as lettuces, tomatoes, herbs, cucumbers and peppers,” he said, all of which tend to travel long distances (at least to Midwest and East Coast markets) by refrigerated truck. The company won’t try to grow crops like rice or wheat, which ship and store cheaply, or vegetables that grow in the ground like onions, carrots or potatoes. Hydroponic farming means growing plants in water and nutrients, without soil; hydroponic crops are not generally certified as organic by USDA.

And the costs? “In some instances, we’re actually selling for less,” Lightfoot said. “We can pretty much match the market’s wholesale tomato costs. We can beat the market’s loose leaf lettuce costs.” Freshly harvested produce from a rooftop farm should also have a longer shelf life, which means less waste. Throwing away food adds to costs, of course.