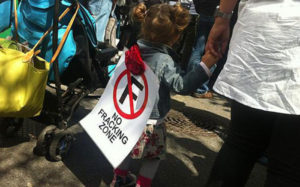 A small child takes part in an anti-fracking protest outside Parliament on 22 September 2012.

Plans to roll out hydraulic fracturing or fracking, as it’s more commonly known, in the Karoo have been halted.

The Supreme Court of Appeal ruled in favour of an application brought by AfriForum and the Treasure Karoo Action Group on Thursday.

The court ruled that the ministers of Mineral Resources and Environmental Affairs do not have the authority to implement the regulations for petroleum exploration and production, which includes shale gas exploration.

Fracking is the process whereby a liquid is injected at high pressure into rocks below the earth’s surface forcing open crevices to extract gas or oil.

AfriForum’s Mornè Mostert said that the entire process of drafting regulations would now have to start from scratch.