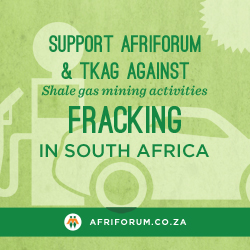 Treasure the Karoo Action Group (TKAG) and AfriForum have formally approached South African Insurers and the South African Insurance Association to clarify their policy on the unique risks presented by shale gas mining and ancillary activities.

With the advent of new technology and shale gas mining spreading at a rapid pace in the United States, insurance providers are scrambling to review their polices and adjust accordingly.

For many companies, such as Nationwide, one of the largest insurance companies in the United States, a thorough review of the damages that can arise due to fracking and other drilling activities, has led to the conclusion that it is better for the company to refuse coverage altogether for any damages related to fracking.

According to an internal memo outlining the company’s policy, “After months of research and discussion, we have determined that the exposures presented by hydraulic fracturing are too great to ignore. Risks involved with hydraulic fracturing are now prohibited for General Liability, Commercial Auto, Motor Truck Cargo, Auto Physical Damage and Public Auto (insurance) coverage.”  Unsurprisingly, this information has raised legal questions and valid concerns for many US home and property owners.

TKAG CEO, Jonathan Deal is of the opinion that the issue of liability for and indemnity from likely claims is something that communities, homeowners and farmers must be informed about.

“The potential for loss here – as a result of an accident – or simply accumulated and unanticipated impacts over a period of time – is enormous, and anyone exposed to these risks – even road users, and people with occasional passing exposure to the activity has an undeniable right to be properly informed by their insurer ahead of time.”