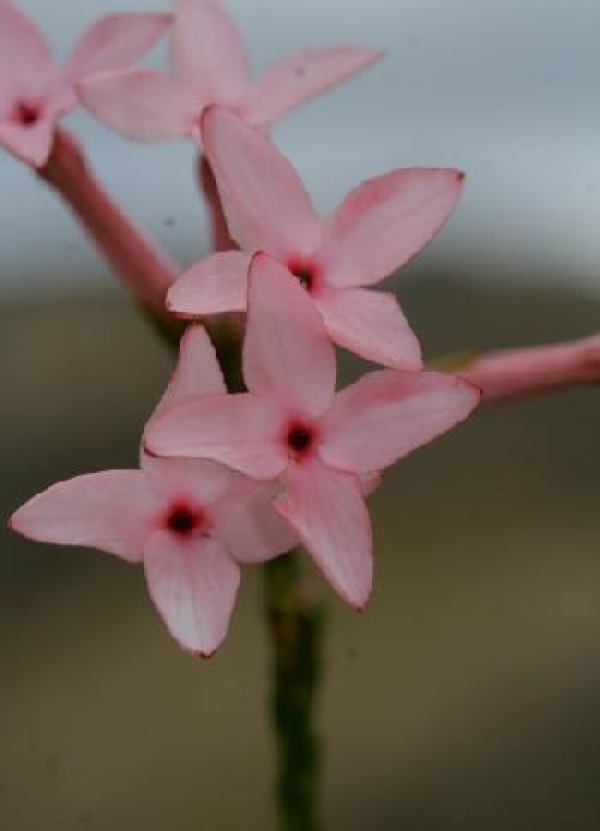 The jasmine heath is a critically endangered species of Erica on the brink of extinction. Image: Ismail Ebrahim

In one of the continent’s largest collaborative conservation projects to date, South Africa has become the first of the world’s mega-diverse countries to fully assess the status of its entire flora – a staggering 20 456 species.

The assessment was published in a book entitled the Red List of South African Plants, which was launched at Kirstenbosch, Cape Town on Earth Day by the South African National Biodiversity Institute (SANBI).

This great work was funded by the Norwegian Ministry of Foreign Affairs’ development branch Norad. It uses the International Union for the Conservation of Nature’s (IUCN) Red List system – an internationally endorsed scientific approach to assessing the risks of extinction to species.

Craig Hilton-Taylor, head of the IUCN Red List program based in Cambridge England explained the significance of South Africa’s floral diversity and underscored the global significance of this assessment.

‘The Red List of South African Plants is a landmark publication that doubles the number of plants on the IUCN’s Global Red List.  Compiling this list has been an enormous multi-partner conservation project. More than 200 professionals as well as members of the public have contributed.’

We are losing plants at a rapid pace

Most medicinal plants not threatened

The trade in medicinal plant species plays an important role in contributing to livelihoods of South Africans. With this in mind, the assessment of these plants is of unique economic significance.

There are an estimated 27 million indigenous medicine consumers in South Africa, with a large supporting industry. The trade in traditional medicines forms part of a multimillion-rand ‘hidden economy’ in southern Africa.

The Red List exposes the status of these plants at a national level:

Habitat loss is the big cause

In order to fully understand how to mitigate loss of species it is important to understand why South Africa’s wild plant species are threatened?

1)    Loss of natural habitat is the most significant threat, affecting twice as many species as any other threat.

3)    Encroachment by invasive alien plants is the third most severe threat and has become more severe in the past decade. This trend can be expected to continue.

SANBI and its partner conservation agencies are working with industry and agriculture to conserve threatened plant species, for example:

For those who want to take action and play their part, SANBI involves members of the public in threatened plant conservation. The Custodians of Rare and Endangered Wildflowers programme (CREW) is an extensive civil society network. CREW volunteers gather information on the status of threatened plant populations in the wild and provide valuable data for monitoring and conservation purposes. Groups of volunteers engage local municipalities in conservation projects to conserve critically sites for threatened species.

Your decisions at the till-point also make a difference. Says Raimondo: ‘We encourage people to be conscious about the impact of their purchases, and to favour products with a conservation ethic. The bottle of wine you choose can make a difference.’